Treasures of the Aga Khan Museum

Masterpieces of Islamic Art. More than 200 masterpieces have been chosen to document more than one thousand years of cultural history. The exhibition is arranged under two main headings: The Word of God, concerning Koran manuscripts, illustrated sheets and objects that deal with the pilgrimage to Mecca; The Route of the Travellers takes the visitor on a journey through the Islamic world. 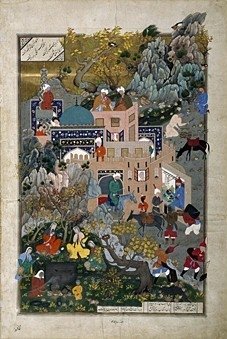 This is the first time the Aga Khan’s collection has been exhibited in Germany. More than 200 masterpieces have been chosen to document more than one thousand years of cultural history. The works on display in Berlin’s Martin-Gropius-Bau are from the collection of the Aga Khan Trust for Culture. Karim Aga Khan IV is the spiritual head of the Ismaili Muslims. He is also regarded as a direct descendent of the Prophet Mohammed. His collection is considered to be one of the world’s largest and most valuable collections of Islamic art and will be housed from 2013 onwards in the new Aga Khan Museum in Toronto.

The Berlin exhibition will show some of the most important works of art from traditionally Islamic countries, including pages from the Persian heroic epic “Shahnama”, or “Book of Kings” by the poet Firdawsi. The miniatures are among the most remarkable in the world. Furthermore there is the oldest known Arabic manuscript of the later translated “Canon of Medicine” by Ibn Sina (Avicenna). Abu Ali Ibn Sina was a philosopher and physician. For over 500 years his magnum opus served as a standard work and textbook for physicians in Europe. Other outstanding cultural artefacts are a very well preserved Mongolian robe of silk damask from the 13th century and a double page of the “Blue Koran” from the 9th century. The blue parchment sheets are written in golden letters in the Kufi script and are among the most valuable and elaborate Koran manuscripts in the world.

In general the artworks on display – paintings, drawings, book illustrations, manuscripts, inscriptions, metalwork vessels, ceramics, and wood carvings – make one realize the extraordinary variety and overwhelming richness of an Islamic culture which from the 8th to the 18th centuries stretched from the Maghreb and the Iberian Peninsula all the way to China.

The exhibition is arranged under two main headings: “The Word of God”, concerning Koran manuscripts, illustrated sheets and objects that deal with the pilgrimage to Mecca or Islamic mysticism and have served many artists and architects as a source of inspiration. “The Route of the Travellers” takes the visitor on a journey through the Islamic world, which once stretched from Al-Andalus, the Muslim part of the Iberian Peninsula, through the Maghreb and Sicily, Fatimid and Mameluke Egypt, Ottoman Constantinople, Omayyad Damascus and Ayyubidic Baghdad and on to Persia, Central Asia and the Moghul Empire in India. The works produced in this period testify to the skills and creativity of the various societies and reveal both Asian and European influences.

Another section of the exhibition is devoted to the poet Firdawsi, who is often compared with Homer (940/41-1020). Exactly one thousand years ago he completed the Persian Book of Kings, one of the most famous works of Persian literature, covering the history of ancient Persia before the Muslim conquest. The Shahnama comprises more than 50,000 verses, making it more than twice as long as Homer’s epics. It became a handbook for shahs and sultans, who vied with one another to obtain the lavishly illustrated copies. Two of these books have been digitized, so that visitors will be able to virtually scroll up and down in them for the first time.