Motion Pictures. The premiere screening of Cult: Making of The Cure. The 198 Gallery is proud to present a special screening of the new production by Leo Asemota. Plus the opportunity to experience Palindrome r.s.s.r. Asemota's provocative and admired 2001 short. 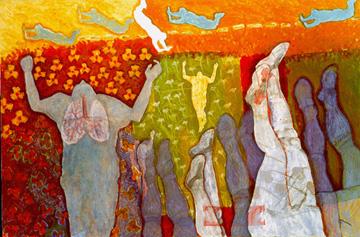 The premiere screening of Cult: Making of The Cure
The 198 Gallery is proud to present a special screening of the new production by Leo Asemota. Plus the opportunity to experience Palindrome r.s.s.r. Asemota's provocative and admired 2001 short.

'Leo Asemota is a fiercely original talent. Best known as a filmmaker, Leo's work spans a range of artforms and discourses and always in the most unusual and arresting way.
Leo Asemota's work cannot be boxed and defies expectations.'
Lois Keidan. Live Art Development Agency

Leo Asemota trained in film and photography at the London College of Printing and emerged to receive the Artsadmin Artist Bursary in 1999 and the London Arts Bursary in 2001. His earlier films have toured London, South Africa and the United States, with screenings at the ICA, The Lux and the Curzon Cinema Soho. Asemota's photographic work is currently part of the group show 'Local Heroes Â­ London & New York' at The National Portrait Gallery until 30 March 2003.

Literary references include 'Skeletons of Fish' published 2002 by the Fount Enterprise. 'Map of a City' published 2001 London Borough of Camden, a body of work from which InIVA licensed eight images to be used in 'Magnet', Volume 1, published 2001. As Art-Director-at-Large responsible for photography at 'Blues & Soul' magazine, Asemota has produced numerous covers and features on recording artists and personalities such as Jill Scott, Eminem, Ms Dynamite, Wyclef and Archbishop Desmond Tutu from 1997 to the present day.

Asemota is gaining recognition on the London art scene for his provocative exploration of perception and his technical virtuosity in filmmaking.
'Palindrome r.s.s.r.' brings his disciplined intensity to bear on 4 short films examining the issues of race, sin, sex and religion.

The new and eagerly awaited 'Cult: Making of The Cure' presents the process of creating the photographic work 'The Cure'. The still image will be simultaneously exhibited in the window of Zwemmer's Bookshop, Charing Cross Road, March 6-16 2003. Only one print of 'The Cure' will ever be made affirming Asemota's constant quest for uniqueness and rejection of mechanical reproduction.

Not only will this be the first showing of 'Cult', but also the first appearance of Asemota himself on screen as subject. 'Cult' plays with 'many valued logic', the bizarre process whereby an allusion is taken as fact, presented as truth, extended and theorised, but the basis is false.

Strictly no admittance once screening has begun