An open-air screening of videos by Dara Birnbaum and Dan Graham. This screening will feature individual videos by each artist, as well as a collaborative work. The program highlights resonances between the video works of these influential and provocative artists, as well as points of departure and difference. 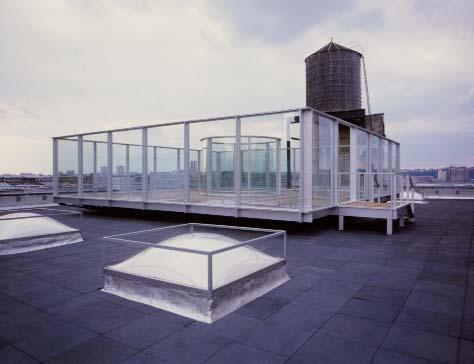 Dia will host an open-air screening of videos by Dara Birnbaum and Dan Graham. The screening, which will take place on Dia's rooftop, in Graham's "Rooftop Urban Park Project" of 1991, is co-hosted by Electronic Arts Intermix (EAI) as part of an ongoing series of events celebrating its 30th anniversary. This event was originally scheduled for September 2001.

This screening will feature individual videos by each artist, as well as a collaborative work. The program highlights resonances between the video works of these influential and provocative artists, as well as points of departure and difference. Birnbaum and Graham apply distinctive strategies to the analysis of the social function and meaning of popular culture, architecture, public and private space, and mass media.

The program includes the premiere of Birnbaum's "Attack Piece," a video installation that was originally produced in 1975 and recently restored through EAI's Preservation Program; a collaborative work by Birnbaum and Graham that analyzes local TV news; key tapes by Birnbaum that critique popular culture, including "Kiss The Girls: Make Them Cry" (1979); works by Graham that investigate cultural phenomena, including his 1983 document of the Hardcore band Minor Threat; and rarely seen short commissions by Birnbaum.

Dara Birnbaum was born in New York City, where she lives and works. Birnbaum received a Bachelor of Architecture degree from Carnegie Institute of Technology and a Bachelor of Fine Arts in painting from the San Francisco Art Institute. In her videotapes and multi-media installations, Birnbaum often uses the media's technology to subvert, critique, or deconstruct mass-media images. Birnbaum's work has been presented in retrospective exhibitions at Kunsthaus Zurich, Switzerland; Kunstmuseum, Berne, Switzerland; and American Film Institute, Los Angeles.

Dan Graham was born in Urbana, Illinois, and lives and works in New York City. Since the mid-1960s, he has produced a body of art and theory that engages the historical, social, and ideological functions of contemporary cultural systems. Architecture, popular music, video, and television are among the focuses of his investigations, which are articulated in essays, performances, installations, videotapes and architectural/sculptural designs. Graham's work has been exhibited in retrospective exhibitions at Van Abbemuseum, Eindhoven, Holland; Museum of Modern Art, Oxford, England; Kunsthalle, Berne, Switzerland; and the Art Gallery of Western Australia, Perth.

DIA
Founded in 1974, Dia Art Foundation plays a vital and singular role among visual arts institutions nationally and internationally by initiating, supporting, presenting, and preserving art projects, and by serving as a primary locus for interdisciplinary art and criticism. Dia presents a program of exhibitions at Dia Center for the Arts in Chelsea, New York City. Supplementary programming at Dia Center for the Arts includes artists' projects for the web, lectures, poetry readings, film and video screenings, performances, scholarly research and publications, symposia, and an arts education program that serves area students.
Exhibition hours at Dia Center for the Arts during the 2001-2002 season are Wednesday through Sunday, 12 noon to 6 pm, through June 16, 2002.

ELECTRONIC ARTS INTERMIX
Electronic Arts Intermix is a nonprofit media arts organization that is one of the world's leading resources for artists' video and new media. Founded in 1971, EAI serves artists, educators, curators, and diverse audiences through a wide range of programs, including the distribution of an international collection of artists' tapes, ranging from historical works of the 1960s to new works by emerging media artists.