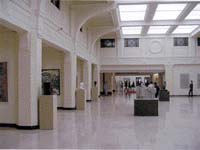 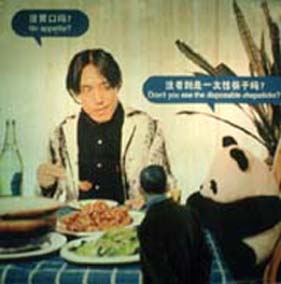 The Shanghai Biennale started in 1996 as an exhibition for Chinese artists only.
On its third edition the biennial became international, showcasing works by some 30 Chinese and 30 foreign artists at the newly refurbished Shanghai Art Museum - which used to be a jockey house in the British settlement of the 1930s. Complementing the Chinese curatorship that chose local artists, Paris-based Hou Hanru and Japanese independent curator Toshio Shimizu handled foreign participants who included Tatsuo Miyajima, Mariko Mori, Lee Bul and Huang Yongping. But such artists, who haunt biennials around the world, mostly ended up showing a mere variation of their past work. The most interesting discoveries to come out of this $100 million exhibition, sponsored by the Chinese national government and the city of Shanghai, were Chinese artists rarely seen overseas. To cite but a few: Liu Xiaodong's oil paintings depicting people in today's China with an ironical insight into their minds; Wang Yuping's oils of stylized fish in vivid colors, vigorously exploring the border between art and design; and Ji Dachun's white canvases with symbolic figures in thin black oil paint, creating a unique, enigmatic atmosphere. By the way, Chinese contemporary art seems to be divided into three categories:
1) That which uses established art forms like oil painting but often takes up such contemporary themes as gender and society.
2) Socially or politically minded expressions that forsook conventional forms in favor of such new means as installation and video.
3) The most radical sect that has no faith at all in what has been supposed to be 'art' and employs anything as material.
The Shanghai Biennale 2000 dealt with categories 1 and 2, Liu, Wang, and Ji belonging to the moderate section of the former. Artists like these are usually overlooked by international exhibitions such as the 1999 Venice Biennale, perhaps because they are not 'typically' Chinese, lacking loud political messages, or extravagant or exotic expressions. As suggested by its theme 'Shanghai Spirit,' the biennial considerably reflected Shanghai's position as China's most international, progressive city. However, the real Chinese avant-garde was to be seen at an alternative exhibition by young artists.