Dissolving into the everyday 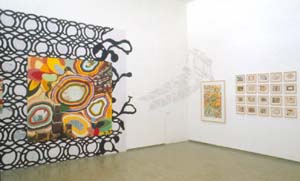 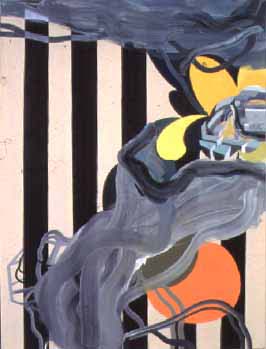 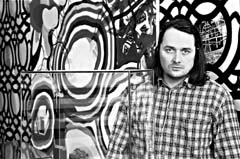 Wolf-Günter Thiel & Milena Nikolova: Your travels have produced a personal, subjective image-bank that you enrich with drawings or photographs. You then use these images to generate water-colors, often some time later. So it could be that one of the water-colors in which you capture an exciting urban situation originates in a little hotel in your hometown. You call these water-colors Mental Maps. This is obviously different from the mental approach taken by Romantic landscape painters who use water-colors, or from water-colors by Klee or Macke, who completed them during or immediately after their trips to Tunis. What are the most important differences as far as you are concerned?

Franz Ackermann: Photographs, postcards, newspaper pictures, town plans, tourist brochures etc., anything that "represents" a city, can find their way into a water color, or later into an oil painting. But they don't have to. Most of the Mental Maps are created more or less 1:1 on the spot, by "going for walks" and "looking." If a sheet, despite an absolutely wonderful street corner or sight, doesn't work as a sheet as such despite all this, it will be worked on again, straight away or later. The place itself is looked at from different sides, then broken down into its "truth content." Every sheet has to be outstanding. My memories and experiences are entirely without significance (by and large) as far as the reception of my work is concerned. And things like "oh, the light, the horizon, the wide-open spaces... freedom" - I'm not interested in at any price.

WGTH&MN: Your experiences and perceptions are exciting travel experiences when you report on the market in Hanoi, the wares available in Damascus or advertising posters in Montevideo. You make observations that are incorporated into your Mental Maps. Perhaps you could describe the situations briefly and say why they made such an impression on you and how they found their way into your pictures.

FA: As I have already mentioned, my artistic work does not illustrate my need to travel at all. I am drawn to a particular place by entirely subjective considerations. I don't waste any time thinking about whether a place is
productive for my work or not. Everyone has to go into the Maraçana stadium in Rio de Janeiro once in their lives. And so do I. It's quite legitimate for this concrete bowl to keep cropping up as a pictorial fragment in various contexts. The beach there, the old town in Damascus or scenes in Hanoi are always worth a story or an anecdote. No more and noless. For the time being...


WGTH&MN: Why are there never any people in your pictures?

FA: Once I've chosen a place the key thing for me is to get to know and understand its existing "structure." Of course this existing structure is based on decisions and actions in the broadest sense. I see this pattern of behaviour as having exactly the same value as my actions (often as a tourist). The unfriendly baker in Berlin is not enough to make me opt for the friendly but irritating dealer in Morocco. He doesn't have that much power. I'm not looking for a comfortable counter-design, and anyway you don't let yourself be driven away by idiots as quickly as that... The fact that there are so many moped riders in Bangkok produces the most fascinating fog - smog. Why haven't I shown that in my pictures yet? Perhaps I should ask Olafur Eliasson. (To be continued on the Magazine)
(Translated from German by Michael Robinson)