Modern Art from the Guggenheim Collection, 1910-1918. The exhibition unites the Guggenheim Foundation's Collections in New York and Venice and illuminates the spirit of dynamism and innovation that marks the period before world war I. Featuring more than 100 paintings, sculptures, and works on paper by 48 avant-garde artists - such as Umberto Boccioni, Marc Chagall, Marcel Duchamp, Kazimir Malevich, and Pablo Picasso - the show attests to this period of collaboration, interchange, synthesis, and innovation. 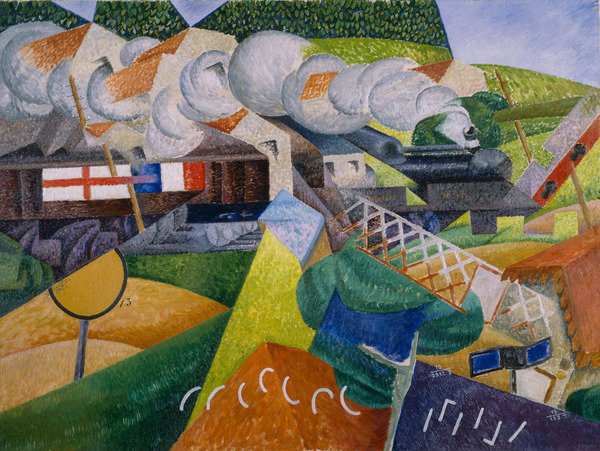 When Vasily Kandinsky and Franz Marc formed the group Der Blaue Reiter (The Blue Rider) in late 1911, the artists predicted a watershed in the arts, a große Umwälzung (great upheaval) that would radically challenge traditional artistic production. Tremendous creativity and innovation characterized the years leading up to World War I. European cities were evolving, and the artistic avant-garde likewise adapted and responded to twentieth-century modernity, from its spectacles and technological feats to the social fragmentation and alienation of the modern metropolis. Cubism achieved recognition in Paris, sparking new directions in France, Italy, the Netherlands, and Russia. Art’s more expressionistic manifestations were at an equally momentous stage in Germany and Austria; Kandinsky wrote his influential treatise Über das Geistige in der Kunst. Insbesondere in der Malerei (On the Spiritual in Art: And Painting in Particular) in late 1911, and abstraction took hold.

The Great Upheaval: Modern Art from the Guggenheim Collection, 1910–1918 illuminates the dynamism of this fertile period, as artists hurtled toward abstraction and the ultimate “great upheaval” of a catastrophic war, and also highlights the masterpieces of modern art that launched the museum’s collection. The exhibition unites the Guggenheim Foundation’s remarkable collections in New York and Venice in order to trace the origins of the museum and capture the spirit and dynamism of the European avant-garde. Featuring more than one hundred paintings, sculptures, and works on paper by 48 artists including Umberto Boccioni, Marc Chagall, Marcel Duchamp, Kandinsky, Fernand Léger, Kazimir Malevich, Marc, and Pablo Picasso, among others, The Great Upheaval attests to this period of collaboration, interchange, synthesis, and innovation. The exhibition is curated by Tracey Bashkoff, Curator, Collections and Exhibitions, and Megan Fontanella, Assistant Curator, Collections and Provenance.

This exhibition is supported by a grant from the Joseph and Sylvia Slifka Foundation.

The Guggenheim Museum’s engagement with the modern period began nine years after the 1918 ceasefire, with a portentous meeting between founder Solomon R. Guggenheim and the young German artist Hilla Rebay in late 1927. Rebay was commissioned to paint the retired industrialist’s portrait, but what transpired was a fruitful collaboration that would last until Guggenheim’s death. Under Rebay’s guidance, the focus of the art collection Guggenheim had formed with his wife, Irene Rothschild, shifted dramatically away from the old master paintings, French Barbizon school, American landscapes, and other similar work that was fashionable within their circle. Instead, in 1929 Guggenheim began enthusiastically collecting the art of his time and especially exponents of nonobjectivity, an art form that aspired to spiritual or utopian aims. He simultaneously began to amass prime examples of European modernism, acquiring art directly from such artists as Robert Delaunay, Albert Gleizes, and Kandinsky. Since the establishment of the Solomon R. Guggenheim Foundation in 1937, subsequent acquisitions have augmented and enriched Guggenheim’s original collection.

The Great Upheaval is arranged chronologically, ascending the unique spiral of the Frank Lloyd Wright– designed building in order to trace artistic development toward abstraction and underscore the interconnections between emerging artist groups. The first five ramps of the rotunda represent a different year of artistic activity from 1909/10 through 1913, while the topmost ramp highlights the war years, 1914–18.

Education and Public Programs
For complete information about the range of public programs related to The Great Upheaval, please visit guggenheim.org/education. Programs will include the following:

Performance Programs
In conjunction with The Great Upheaval, the Guggenheim presents two performance programs produced by Charles Fabius and generously supported by the Peter Jay Sharp Foundation. Tickets are $30, $25 members, $10 students. For tickets, visit guggenheim.org/publicprograms, or call the Box Office at 212 423 3587.

* On April 14, artist Dominique Gonzalez-Foerster will create an installation performance in the Guggenheim rotunda, titled T.1912 and inspired by the historic tragedy that occurred on April 14, 1912. Gavin Bryars’s work The Sinking of the Titanic (1969) will be at the core of the installation, performed by The Wordless Music Orchestra. There will be two performances wherein the audience has a role. Prepare to "board" at 8:40 or 10:40 pm.

* The Guggenheim will present REIGEN ad lib, a contemporary staging of Der Reigen (Hands Around, 1897) by playwright Arthur Schnitzler, performed in English by Dood Paard, an avant-garde theater collective without a director or set designer based in Amsterdam. Born in Vienna, Schnitzler was first trained as a psychiatrist. A close friend of Freud and often considered his literary counterpart, Schnitzler wrote a series of influential works, including Der Reigen, a play considered so scandalous at the time due to its sexual content that it remained banned for more than twenty years, with only one unauthorized performance in Budapest in 1912. The actors perform in underwear and in gaudy costumes while the sexual act is intimated through stroboscopic projections of the video Sync by the artist Marco Brambilla from the compilation Destricted (2006), a collection of short erotic films by artists. Performances will be held in the Peter B. Lewis Theater on April 28, 29, and 30 at 8 pm, and on April 30 at a 3 pm matinee. This program is supported in part by public funds from the Netherlands Cultural Services.

Lecture
“Isms” and “Ists”: The Modernist Group in the 1910s
Milton A. Cohen Professor of Literary Studies, University of Texas at Dallas
Tuesday, March 15, 6:30 pm
The 1910s witnessed an explosion of modernist groups. In the visual arts alone, prominent groups included the Italian Futurists, the Parisian Cubists and Orphists, Der Blaue Reiter of Munich, Die Brücke of Berlin, the London Vorticists, and the Russian Rayists. What accounts for this burgeoning? What made groups so appealing to artists in these years? More importantly, was this surge in modernist groups related to the accelerating innovation in all the arts of these years? “Isms and Ists” will address these questions and conclude with examples of how one group in particular, the Italian Futurists, influenced artists from London to Munich to Moscow. Cohen’s essay “Artists Write! Manifestos and Books in 1912” appears in The Great Upheaval exhibition catalogue. Tickets are $10, $7 members, free for students, and are available at guggenheim.org/publicprograms or via the Box Office at 212 423 3587.

Music
“Bright Field”: Music and Modernism
R. Luke Dubois Tuesday, May 24, 6:30 pm
During the decade leading up to the first world war, composers such as Debussy, Schoenberg, Scriabin, and Stravinsky were writing music in active dialogue with the social upheavals, intellectual currents, and political events of their day, embracing the same radical spirit that inspired their colleagues in the visual arts. This gallery program highlights selections of music from 1910–18 alongside the works in The Great Upheaval. A talk by American composer R. Luke DuBois precedes the concert. Tickets are $15, $10 members, $5 students, and are available at guggenheim.org/publicprograms or via the Box Office at 212 423 3587.

Courses
Public & Artist Interactions: The Artist’s Voice with Karen Finley
Mondays, February 28, 5:30–8:30 pm; March 7, 14, 21, 6–8:30 pm; March 28, 5:30–8:30 pm Taught by artist Karen Finley, and drawing from works on view in The Great Upheaval and the concurrent exhibition The Deutsche Bank Series: Found in Translation, this five-session workshop engages adults in writing exercises, studio work, museum visits, and collaborative discussion to explore language as metaphor, text as visual media, and their own inner voice. A final reflection concludes the process. No art-making experience required. $250, $175 members and students. For more information and to register, please call 212 423 3781.

Public & Artist Interactions: The Modernist Studio with Corey D’Augustine
Expressionism, Saturday, March 12, 10 am–4 pm
Abstraction, Saturday, April 9, 10 am–4 pm
Taught by independent instructor, artist, and conservator Corey D’Augustine, these daylong studio workshops examine Expressionism and Abstraction from the perspective of the artist by employing the techniques used in paintings of the period. After a brief slide lecture, students visit The Great Upheaval to view works of art in person. Each student then paints a small canvas based on these works in the studio. By combining painting technique, visual analysis, and art historical concepts, these workshops link studio practices with both the development and reception of Expressionist or Abstract painting. No previous painting experience is necessary. $75, $60 members and students for one session; $140, $110 members and students for both sessions. Registration is offered online at guggenheim.org/publicprograms.

Film Programs
This program of international films from the early twentieth century spans the period of The Great Upheaval. During these years, the burgeoning film industry quickly became a quintessential facet of modern life, offering escapism, decadence, and the destruction of distance. Unless otherwise stated, films screenings are on Fridays, free with museum admission and are shown in the New Media Theater in the Sackler Center for Arts Education. This film program is made possible with public funds from the New York State Council on the Arts, a state agency. For complete film descriptions, visit guggenheim.org/filmscreenings.

Exhibition Catalogue
Accompanying The Great Upheaval: Modern Art from the Guggenheim Collection, 1910–1918, which explores the tremendous creativity and innovation that characterized the years leading up to World War I, this catalogue investigates the Guggenheim’s engagement with modernism and the institution’s early commitment to collecting works by such artists as Constantin Brancusi, Marc Chagall, Robert Delaunay, Vasily Kandinsky, Pablo Picasso, and others. The book is fully illustrated with five plate sections -each highlighting a period of artistic production from 1910 to 1918- with corresponding cultural time lines and essays by Tracey Bashkoff, Emily D. Bilski, Milton A. Cohen, Megan M. Fontanella, and Tara Ward.