The berlin sculpture find of 2010. 75 years after the outlawing Degenerate Art show, the exhibition highlights in an exemplary fashion how works of art that were confiscated from the Pinakothek museums and other German museums at the behest of Adolf Hitler in 1937, were lost, in part destroyed or sold at a profit. 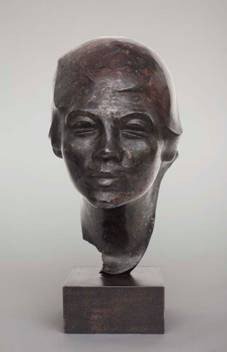 75 years after the outlawing ‘Degenerate Art’ exhibition, the Neue Pinakothek is showing the Berlin sculpture find of 2010. The exhibition highlights in an exemplary fashion how works of art that were confiscated from the Pinakothek museums and other German museums at the behest of Adolf Hitler in 1937, were lost, in part destroyed or sold at a profit. The aim was for ‘degenerate’ works of art to be liquidated in their entirety or put to further use.

This spectacular find is now being shown at the Neue Pinakothek, the third venue after the exhibition in 2010 at the Neues Museum in Berlin and in 2012 at the Museum für Kunst und Gewerbe in Hamburg. The Berlin sculpture find has been particularly revealing and of great value to provenance research.

The confiscation of works in Munich

On 25 August, the second ‘Kommission’, under the direction of the Landesleiter of the Reichskunstkammer in Franconia and the Landesleiter of the Reichskammer in Bavaria, confiscated a further 110 works from the depots of the Alte Pinakothek, the Neue Staatsgalerie on Königsplatz (now the Antikensammlung) and the library building at the Deutsches Museum. A total of 137 were confiscated by the ‘Kommissionen’ in Munich in 1937 and taken away in three lorries to the Haus der Kunst in Berlin and the Reichskammer der Bildenden Künste, Köpenickerstr. 24a, also in Berlin.

The bronze portrait of Anni Mewes
Less than five percent have since been retrieved. One of the objects from the Berlin sculpture find of 2010 is the portrait of the actress Anni Mewes (1896–1980) by Edwin Scharff (1887–1955) from the collection of the Bayerische Staatsgemäldesammlungen. This bronze bust of the actress aged 22 was one of the most popular portrait sculptures of its time.

Mewes performed at the Lessingtheater in Berlin and at the Volksbühne in Vienna when just 18 years old. Otto Falkenberg then brought her to the Münchner Kammerspiele. In 1918 she moved to the Hamburger Kammerspiele and in 1920 to Max Reinhardt in Berlin. Her correspondence with Rainer Maria Rilke is now in the Bayerische Staatsbibliothek in Munich. Anni Mewes left Berlin in 1935, returning to the stage again after her husband’s death, appearing at the Josefstädter Theater in Vienna and going on tour with Marianne Hoppe. Her daughter, Annemarie Herald, a very successful artists’ agent, brought her back to Munich where Anni Mewes died in 1980, aged almost 85.

The history of the Berlin sculpture find

The sculptures were found during excavation work in Rathausstrasse, formerly Königstrasse 50, opposite the Rotes Rathaus in Berlin. From October 2009 onwards, archaeological digs were carried out before the extension of the U5 underground line from Alexanderplatz to Brandenburg Gate. When removing the cellar floors in January 2010, a conspicuous metal object was salvaged that, a few days later, was identified as a work of art after initially being cleaned in the workshop at the Museum für Vor- und Frühgeschichte. A few weeks later it was identified as a portrait of the actress Anni Mewes by Edwin Scharff.

The significance of the find, however, still lay in the dark as, at that time, the background to a single find could have had numerous explanations. In August 2010 further bronze and terracotta sculptures were discovered in the northwest corner of the cellar and also sent to the Museum für Vor- und Frühgeschichte. It was not until after a red terracotta head had been identified as part of the work ‘Die Schwangere’ (The Expectant Mother) by Emy Roeder that a connection to the ‘Degenerate Art’ campaign was revealed. The sculptures were found in a small space that had, however, been divided by a cellar wall. Evidence was found in one part of the cellar that the sculptures clearly lay on top of other objects in the cellar. In the other space, no traces of the original fittings could be found. It would seem likely that the sculptures were not stored in the cellar but fell from one of the floors above. The fire in the building caused all ceilings to collapse.

The consequences of the ‘Degenerate’ Art campaign

The decree issued by Adolf Hitler on 27 July, 1937, resulted in 19,500 works of art from the ‘Verfallszeit’ (depraved period) – as the National Socialists mockingly called Modernism – being confiscated from museums in all states and communes in the Reich and banished into depots, sold to bring in foreign currency or destroyed. The measures ordered by the state were subsequently declared legal through the ‘Gesetz über die Einziehung von Erzeugnissen entarteter Kunst’ (law

governing the confiscation of degenerate works of art) of 31 May, 1938. To this day, the whereabouts of many works remains unknown. The

German museum landscape and its collections that had grown throughout history were fundamentally changed or even destroyed. 12 paintings by Max Beckmann, Ernst Ludwig Kirchner, Lovis Corinth, Franz Marc and Karl Schmidt-Rottluff that were originally held in museums in Leipzig, Essen, Stettin, Berlin, Mainz, Frankfurt, Halle and Königsberg

(Kaliningrad) are now to be found in the Pinakothek der Moderne, and have been marked with an ‘!’ especially for the exhibition.

The ‘Degenerate Art’ Research Centre at the Freie Universität Berlin reconstructs the confiscation of modern art and looks into the fate of these works. Thanks to references found in the Bundesarchiv, a document was discovered that contained pertinent information: the Ministry of Propaganda had obviously stored confiscated works of art at Königstrasse 50 after they had been sent back to Berlin following the touring ‘Degenerate Art’ exhibition. In early summer 1944, the house was bombed and the sculptures buried under rubble.

The ‘Degenerate Art’ Research Centre is carrying out further research on the find. The results of this research will then be added to a catalogue raisonné of works confiscated during the ‘Degenerate Art’ campaign in 1937. The database includes information on the artists, objects, museum of origin, confiscation, where stored, dealers and buyers as well as historical and current illustrations, as well as providing comprehensive information on the work of artists affected, a history of the museum’s collection and the art trade during the Third Reich. Further information can be found under: http://entartetekunst.geschkult.fu-berlin.de

An exhibition of the Museum für Vor- und Frühgeschichte, Staatliche Museen zu Berlin in cooperation with the ‘Degenerate Art’ Research Centre at the Freie Universität Berlin, supplemented by works from the holdings of the Pinakothek der Moderne and historical sources for the exhibition in Munich.