Infinite Possibility. Mirror Works and Drawings. This presentation of the Iranian artist includes plaster and mirror reliefs, large-scale mirror sculptures, and works on paper, from the 1970s to the present. 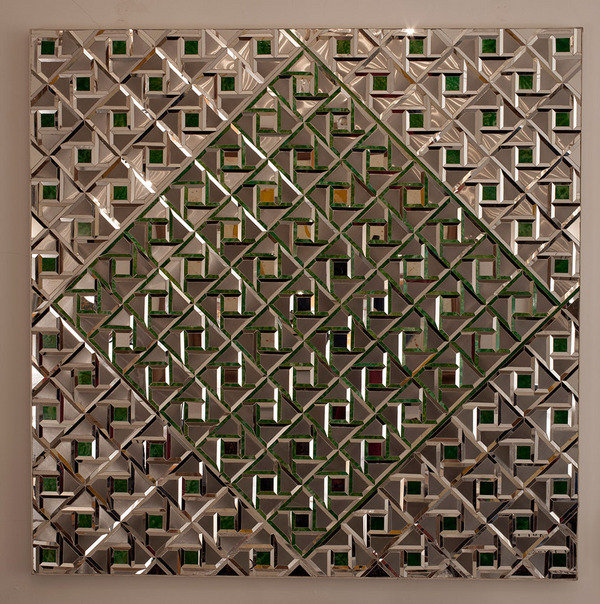 From March 13 to June 3, 2015, the Solomon R. Guggenheim Museum will present the first comprehensive exhibition in the United States of the celebrated Iranian artist Monir Shahroudy Farmanfarmaian (b. 1924). In recognition of a lengthy career, Monir Shahroudy Farmanfarmaian: Infinite Possibility. Mirror Works and Drawings 1974–2014 focuses on the faceted mirror sculptures and corresponding geometric drawings Monir has produced over the past forty years. The majority of the selected works in this exhibition are from the artist’s own collection, and many have never been shown to the public.

Monir’s rich body of work references Persian architectural and decorative tradition, the mathematical basis of geometric forms in Islamic pattern, and Sufi cosmology. When considered along with the Guggenheim’s historical commitment to abstraction and internationalism, the exhibition offers a timely opportunity to examine Monir’s rich body of work in its own right and as part of an increasingly transnational perspective on artistic production and its reception.

The Leadership Committee for Infinite Possibility is gratefully acknowledged for its support, with special thanks to Simin N. Allison, Maryam Eisler, The Soudavar Memorial Foundation, Mohammed Afkhami, Patricia and Alexander Farman-Farmaian, Haines Gallery, Yasmine Nainzadeh and Sara Nainzadeh, Nazgol and Kambiz Shahbazi, and The Third Line.

Monir Shahroudy Farmanfarmaian: Infinite Possibility. Mirror Works and Drawings 1974–2014 includes early wood, plaster, and mirror reliefs, a series of large-scale geometric mirror sculptures, and an impressive body of works on paper, focusing on a sculptural and graphic oeuvre developed over a period of more than forty years. The presentation reveals how the compositional principles used by the artist during this period were translated into large-scale commissions, including a series of etched glass doors created for a New York townhouse in the early 1980s. A selection of previously unseen abstract works on paper produced between 1974 and 2014 reveals the central role of drawing as a conceptual foundation for Monir’s sculptural practice. The artist’s ambitious mirror sculptures, known as “geometric families,” which she produced in the last decade since reinstating her studio in Tehran, will also be on view. Monir’s prolific body of work is characterized by the merging of visual and spatial experience and a distinctive approach to abstraction, coupled with the aesthetic tradition of Islamic architecture and decoration, allowing for, in the artist’s own words, “infinite possibility.”

Born in Qazvin, Iran, in 1924, Monir attended the Fine Arts College of Tehran before moving to New York in 1945, where she studied at Cornell University and at Parsons School of Design and worked as a freelance illustrator for Vogue and as a graphic designer. These formative years in New York served as a sort of apprenticeship for Monir, who spent time alongside fellow artists Milton Avery, Willem de Kooning, Joan Mitchell, Louise Nevelson, Barnett Newman, and later Andy Warhol, among others. Notably, during her time in New York, Monir visited the Guggenheim in its founding locations and was present at the 1956 groundbreaking for the Frank Lloyd Wright–designed museum building on Fifth Avenue. She returned to Iran in 1957 and journeyed across the country, further developing her artistic sensibility through encounters with traditional craftsmanship. Indigenous art forms such as Turkoman jewelry and clothing, coffee house paintings (a popular form of Iranian narrative paintings), and the technique of reverse-glass painting influenced her work, resulting in a productive period of artistic discovery and breakthrough that culminated in a series of commissions in Iran and exhibitions in Europe and the United States, including presentations at Galerie Denise René in Paris and New York. The Islamic Revolution in 1979 marked the beginning of Monir’s twenty-six-year exile in New York, during which she focused on drawing, collage, and a few commissions, and also returned to carpet and textile design. In 2004, when she finally returned to Iran, she reestablished her studio there and resumed working with some of the same craftsmen she had collaborated with in the 1970s.

Monir’s works are found in numerous public collections, including the Metropolitan Museum of Art, New York; Queensland Art Gallery, Brisbane; Tate, London; and the Victoria and Albert Museum, London. Several of the artist’s extant works from the 1970s are in the collection of the Tehran Museum of Contemporary Art. Major commissions include installations at King Abdulaziz International Airport in Jeddah, Saudi Arabia, Dag Hammarskjöld Tower in New York, and the Niavaran Cultural Center in Tehran.

The exhibition is accompanied by an illustrated catalogue published by Serralves, with essays by Suzanne Cotter; Shiva Balaghi, cultural historian of the Middle East and professor at Brown University, Providence, Rhode Island; and Media Farzin, art historian and critic. The catalogue will be available for purchase for $55