Xia Xing's works create an imaginary reversal of time, they turn the standard dogmas of press photography into their opposite. In a circuitous labyrinth, the line networks of Du Jie trace themselves across the canvas. Looking more closely, we make out the brush mark, follow the paint lines starting out in saturation, getting thinner, until a new stroke begins, etc. 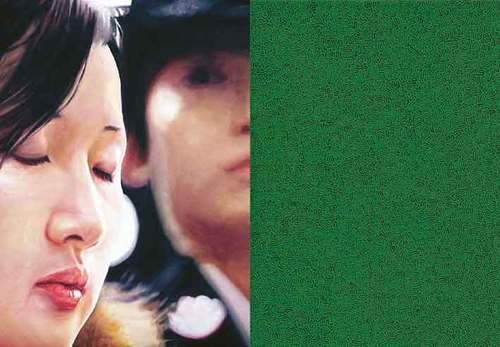 Galerie Urs Meile, Beijing-Lucerne is pleased to present the second solo show of Chinese artist Xia Xing. After his exhibitions of the series "2004" in the Beijing's China Art Archives & Warehouse (CAAW) and "2005" shown last year at Galerie Urs Meile, Lucerne, the new series "2006" is presented in Beijing.

Every day brings new papers, new news, as it were. Like some tidal phenomenon, the deluge of texts and images is flooding the reader's previously stored information. The picture chronicle begun in 2004 by Xia Xing (born in 1974 in Shihezi, Xinjiang province, now living in Beijing) is an intervention into this stream of oblivion. Ever since 2004, he selects front-page pictures from the The Beijing News (Xin Jing Bao) and transfers the scenes in these press photos-more or less faithfully to details-in oil and often with broad brushstrokes, on canvasses of identical size: 70 cm in height and 100 cm in width.

Each annual sequence is composed of around 60 pictures, each titled with the publication date of the newspaper. The related title page that carried the original photo and the article that went with it are technically part of the work though not necessarily displayed as well.

Xia Xing's works create an imaginary reversal of time, they turn the standard dogmas of press photography into their opposite. For the principle of such photos is to reach the reader with the most possible up-to-dateness, i.e. with little or no temporal distance from the events shown in the photos. Xia Xing, however, gets the "water under the bridge" to flow back and invests it with a new function. Detached from the concrete headlines, his picture sequences make us realize the transitory character of emotions such as curiosity, outrage or dismay. Recurring motives like the meeting of politicians, mass gatherings, police interventions, mine accidents or environmental disasters show a continuity of the briefly topical, which in retrospect takes all the punch out of the punch line caption.

While the artist displays scenes of political power presentation with strikingly flat and almost monochrome coat application, he composes all faces-but often also the backdrops of scenes portraying human distress or even happiness-with a well-managed flickering illumination. It is the almost violently expressive brushwork and the intense coloring of the paintings, which artistically reflect a state of agitation. The worm's, or bird's, eye view in many photos that is transferred to the painting adds an additional element of disconcertment.

The unmistakable artistic statement of Xia Xing's annual sequence is the alignment of formats. Regardless of the original's subject, all scenes are brought into a landscape layout. Hanging all paintings closely together at the same height adds to convey to them the status of a collective entity. "I want to do away with the customary interpretation of events as being important or unimportant", says the artist. High-ranking politician or coal miner, the heights and the depths of human life, corruption scandal or stock market trends: Xia Xing fits them into the stream of images, lets them become part of a successively proceeding history that we are witnessing day by day-or the facets of which we take account of, by reading the papers, for example. The artist snatches some showcase occurrences from oblivion, revives them in the process of painting, invests them with a personal touch by choosing a particular technique. By going for a form of painting that is in undeceivable proximity to its objects, this painter assumes the mission of archivist and records manager. And it is not only information as such that is archived here but also the empathetic connection between the occurrence (as well as the persons involved in it) and the viewer.
Text: Ulrike Münter

Du Jie - "Until We Meet Again"

In a circuitous labyrinth, the line networks of Du Jie (born in Xiangfang, Hubei province, in 1968, now living in Beijing) trace themselves across the canvas. Looking more closely, we make out the brush mark, follow the paint lines starting out in saturation, getting thinner, until a new stroke begins, etc. Without any visible effort, the color flows back to the origin of the painting process. And the undulation goes on endlessly.

Like diary sequences, Du Jie's titles testify to the time of their creation. Sometimes it takes the artist three weeks, sometimes four, to produce convolution by convolution of her 25 x 25 cm formats, which she has done since 2003. Whether black on white, or in a lighter and a darker blue, earthy hues or tones of springtime exhilaration, there is always an extreme precision of the brush stroke that has the new sweep flowing along the previous line in wafer-thin distance. The artist's decision to change, after her first few paintings (2002), from oil to water-soluble acrylics was a consequential one: from the point of view of her working technique, the reason was primarily the more liquid consistency which allows the paintbrush to glide with greater ease. It was even more important to Du Jie, however, that this change combined the material with the subject of her work, for the gently curving line is indeed a direct visualization of the ripples and waves of water. And it is not least the metaphorical density of the watery element in Chinese tradition that the artist alludes to in her paintings: water is soft and yielding but also powerful and indispensable to life, and when given an undulating motion, it reaches an almost musical dimension.

In the beginning of Chinese art, there was painting-the flowing Indian ink and the brush moving in masterly arcs. Both the fine art of calligraphy in its function as mediator of meaning and landscape painting with its contemplative intent left the artist with plenty of leeway for individual expression, in serene grandeur or with expressive gesture. Du Jie obviously strays from these beaten tracks, turning to abstract painting. Day by day, the process of painting for many hours provides her with a freedom that is just as productively draining as it is rewarding. In contrast to calligraphy, where the dynamic and abrupt brush stroke is a primary constituent, Du Jie opted for a technique that is determined by contemplation and continuity in unremitting transformation. The artist nonetheless abides by the traditional Chinese basic premise that calls for the identity of one's art and one's art of living.

Du Jie's works are intended for close viewing, with regard to the small formats she chooses and also to the esthetics of her paintings. The reason is that when seen from a distance, the blank spaces in the painting tend to blur, i.e., the still visible canvas ground and the line applied to it melt into a seemingly monochrome surface. So here art decelerates the heart rate, practically commanding our look at it to slow down. The mutual relativity of emptiness and abundance that has determined Chinese cosmology, philosophy, ethics, calligraphy and visual arts for thousands of years inevitably shows in Du Jie's paintings: the esthetics of production and reception argue by analogy.

Until we meet again is the title Du Jie chose for her Beijing exhibition, and this refers not only to the starting and ending points of the painted line that are joined at last when she finishes another piece, but she also means this exhortation in a totally literal sense. Du Jie extends an invitation to the gallery so as to share her joy about the fact that several of her paintings which had already been sold were lent back for the occasion and can now be seen in a creative encounter with her later works.
Text: Ulrike Münter