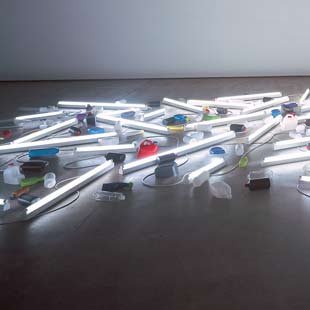 JAYCE SALLOUM: EVERYTHING AND NOTHING AND OTHER WORKS FROM THE ONGOING PROJECT, ‘UNTITLED’ AND RECENT FRAGMENTS/WORKS
8 March- 25 May 2008
Len Lye Self portrait with Night tree 1947


BILL CULBERT: GROUNDWORKS
8 March - 18 May 2008
As a conjurer of light, Bill Culbert observes and orchestrates the transformation of humble and forgotten domestic objects into poetic vehicles for ideas and states of being. Deftly articulated, his installations harness ordinary light sources – lamps and fluorescent tubes – and exist as reminders of the power of material transience and immaterial imagination.

Fifty years ago Culbert moved from New Zealand to London to study painting, a decade later his investigations brought him to the manipulation of light and shadow – in natural and electrical form – as a restrained and potent language of discovery and metamorphosis. Groundworks is conceived in dialogue with the artist’s Lightworks exhibition presented at the Gallery a decade ago. Groundworks also premieres three new works for New Zealand audiences, two of which have been created especially for the Govett-Brewster Art Gallery.


JAYCE SALLOUM: EVERYTHING AND NOTHING AND OTHER WORKS FROM THE ONGOING PROJECT, ‘UNTITLED’ AND RECENT FRAGMENTS/WORKS
8 March- 25 May 2008
This exhibition presents the work of Lebanese Canadian Jayce Salloum, a media artist who has worked in installation, photography, performance and video since 1975. This residency sees a continuation of his ongoing project untitled, a multi-channel video installation addressing social and political realities and conceived as “an approach to research or reading, an active living archive”.

His work engages with issues of globalism, imperialism and the notion of borders, documenting the lives and opinions of displaced peoples, activists and victims in places such as Lebanon and the former Yugoslavia. During his residency, Salloum will develop new work exploring similar issues within a New Zealand context, such as the Terrorist Suppression Act.

Jayce Salloum is a Govett-Brewster International Artist in Residence. This Taranaki residence programme is presented in partnership with WITT and is supported by Creative New Zealand.


Len Lye Self portrait with Night tree 1947
LEN LYE: A PORTRAIT GALLERY
8 March - 18 May 2008
Shortly after World War II the New Zealand-born artist Len Lye (1901-1980) created a striking series of photographic portraits. Including such well-known artists as Georgia O’Keeffe, Joan Miró and Le Corbusier among his sitters, Lye made these ‘photograms’ or ‘shadowgraphs’ without a camera by placing each subject between a light source and a sheet of photographic paper to leave their ghostly silhouette on its surface. In these works Lye drained the portrait of much of its resemblance, but added other traces of the sitter and new layers of meaning. Fascinated by the notion of individuality and the physical factors that inform each person’s makeup, many of Lye’s works can be considered meditations on identity. Len Lye: A portrait gallery features a selection of Lye’s photograms, but through his work in other media, the exhibition sketches the ‘portrait’ of an artist exploring the nature of the self.


FRANCIS UPRITCHARD: RAINWOB I
Until 18 May 2008
With Rainwob I Francis Upritchard offers a visionary landscape populated by abject, awkward and sentimental human figures. This new installation incorporates revitalised found objects and figurative sculptures that are a combination of the familiar, antique and ultramodern. Here Upritchard draws on the hallucinatory works of sixteenth-century Flemish figurative painters Hieronymus Bosch and Pieter Bruegel, utopian countercultural rhetoric, high modernist futurism and the fantasies of survivalists, millenarians and social exiles.

The figures model the faithfulness of spiritual and alternative lifestyles yet also allude to the futility and compromise inherent to dreams. Rainwob I suggests a complex of ideas about time, hope, social and evolutionary change as Upritchard ushers us into another world strangely reminiscent of our own.

Francis Upritchard is a Govett-Brewster New Zealand Artist in Residence. This Taranaki residence programme is presented in partnership with WITT and is supported by Creative
New Zealand. Rainwob II will be exhibited at Artspace, Sydney from 4 - 27 April 2008 and at Gertrude Contemporary Art Spaces, Melbourne from 8 August - 5 September 2008.