Transient Spaces: two new large-scale sculptures. Over the last twenty years, Rachel Whiteread has transformed ordinary domestic objects and architectural spaces into poetic sculptures that explore the relationship between memory, architecture, and the body; and the private and public realm. 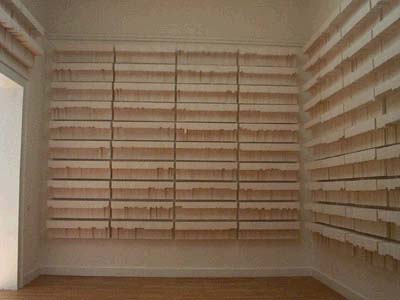 Rachel Whiteread: Transient Spaces, an exhibition of two new sculptures by British artist Rachel Whiteread, opens at the Solomon R. Guggenheim Museum on March 8, 2002. The works, Untitled (Basement) (2001), and Untitled (Apartment) (2001), which were commissioned by the Deutsche Guggenheim Berlin and exhibited there last fall, were cast from the artist's new home and studio. The two sculptures articulate the artist's preoccupation with architecture as a reflection of personal memory and history and as a means to address larger social forces. The exhibition will be on view through June 5, 2002.

"We are extremely proud to present these monumental new works by Rachel Whiteread," noted director Thomas Krens. "Rachel is one of the most formidable sculptors of our time. Her unique approach to the discipline is clear in these pieces, which possess an intense physical presence and communicate a deep sense of humanity."

The exhibition was organized by Lisa Dennison, Deputy Director and Chief Curator, Solomon R. Guggenheim Museum, New York. The exhibition will be installed in the museum's seventh-floor Annex gallery.

Over the last twenty years, Rachel Whiteread has transformed ordinary domestic objects and architectural spaces into poetic sculptures that explore the relationship between memory, architecture, and the body; and the private and public realm. In the late 1980s, Whiteread began making sculptures by casting household fixtures and furniture, including wardrobes, beds, sinks, and baths, to create pieces which emphasize the private aspects of domestic life and reflect the human body in symbolic terms. Using such industrial materials as plaster, concrete, rubber, and polystyrene, Whiteread typically casts the space underneath, around, or inside the objects, creating negative impressions of the items she works with. These forms record the shape and surface of the original objects in detail, but not their physical presence, often invoking in the viewer a sense of remembrance and feelings of absence and loss.

Over time, Whiteread expanded the scope of her program to include casts of larger architectonic spaces. In 1993, the artist created her first public sculpture, entitled House. The work, an off-white concrete cast of the interior spaces in a Victorian working-class home, appeared as a phantom of the original building and drew attention to the consequences of gentrification in East London occurring at the time. In October 2000, Whiteread unveiled the Holocaust Memorial in Vienna, a commemoration to the 65,000 Austrian Jews who were killed during World War II. This monolithic project (an impenetrable, inside-out library) alludes to Nazi book burnings, and to the concept of the "people of the book."

The two new large-scale sculptures presented in Rachel Whiteread: Transient Spaces were created from a London building that, over time, has had various functions, operating as a synagogue, a textile merchant's warehouse, and presently, as Whiteread's residence and studio. With their smooth, unadulterated surfaces, both works embody the generic nature of much postwar architecture and emphasize the simple geometry of the structures from which they come. Devoid of architectural flourish, Untitled (Apartment) (2001) is comprised of a series of small, nondescript rooms, suggestive of the low-income, standardized housing that developed after World War II as Europe strove to rebuild itself. Untitled (Basement) (2001) is a cast of a staircase that, by being reoriented on its side, engenders a surprising encounter between the viewer and this ordinary architectural necessity. Through invoking the building's history, Whiteread's two sculptures reflect on the aesthetic and sociological concerns and necessities that shaped post-war Europe.

In the early 1990s, Whiteread began to receive international attention as part of a stylistically diverse group of artists referred to as the Young British Artists. She has received such accolades as the Tate Gallery's Turner Prize in 1993 and a medal at the 1997 Venice Biennale. Throughout Europe and the United States, her work has been the subject of numerous solo exhibitions in museums and galleries, and she has realized several public art projects. Most recently, in the summer of 2001, her work was featured in a retrospective at the Serpentine Gallery in London, and a public sculpture entitled Monument was unveiled in Trafalgar Square.

Publication: The exhibition is accompanied by a fully illustrated catalogue with essays by Lisa Dennison, Deputy Director and Chief Curator, Guggenheim Museum, Molly Nesbit, Associate Professor of Art History at Vassar College, and Beatriz Colomina, Professor of Architecture and Director of the Program in Media and Modernity at Princeton University, along with a fictional text by A.M. Holmes and an interview with the artist by Craig Houser, former Assistant Curator at the Guggenheim Museum. The volume is published by the Guggenheim and distributed by Harry N. Abrams, Inc.