Ketter's works are both abstract compositions and down-to-earth constructions, both art and reality. The artist was first acknowledged for his Wall Paintings, plasterboards with spackle over screws and joints. Trace Paintings is another series of paintings that resemble wall surfaces being redecorated. Traces of wallpaper, shelves and electric wiring evoke a sense of uncertainty in the onlooker as to whether this is a real wall or a painting of a wall. Curated by Magnus af Petersens. 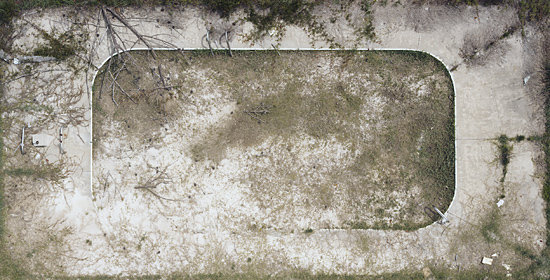 Clay Ketter was first acknowledged for his Wall Paintings (1992-99), plasterboards with spackle over screws and joints. They were both strikingly beautiful abstract paintings and a sort of fabricated ready-mades, less finished than the wall they were hung on. Trace Paintings (1995-) is another series of paintings that resemble wall surfaces being redecorated. Traces of wallpaper, shelves and electric wiring evoke a sense of uncertainty in the onlooker as to whether this is a real wall or a painting of a wall.

Clay Ketter’s works are both abstract compositions and down-to-earth constructions, both art and reality. When two gypsum boards with spackled joints and screws are called a Wall Painting, they are, rather than represent, a wall – as yet unpainted. As paintings and sculptures, these works position themselves in American art history with roots in abstract painting and minimalism. But the viewer is out on a limb here. What looks like a ready-made at first sight, something the artist has selected straight from real life, turns out to be manufactured or processed after careful aesthetic and visual consideration.

The works are often based on architecture, furniture, constructs that can also symbolise the social construct in a broader sense. Clay Ketter never directly depicts people in his art, but their traces have a lot to say about the world we are building – about norms and standards, about man’s vulnerability and other social, political and existential issues. Why are there no windows in these houses?

The traces and remains of a home after demolition or after the ravages of a natural disaster are tragic but nevertheless beautiful. This is contemporary ruin romanticism, matter-of-factly presented without sentimentality. Clay Ketter’s art reveals processes: construction, life and destruction.

The Factory in Lilla Uppåkra

Upstairs in Clay Ketter’s studio buildingis the Play Better Studio, where some of Sweden’s top musicians, including Timbuktu, Titiyo, Nina Persson and Joakim Thåström, come to record their albums. But for Moderna Museet, Clay Ketter’s art is the main attraction. This 48-year-old American, living in Skåne, will be presented in a major exhibition throughout the summer.

Clay Ketter’s studio is in an old school building a couple of hundred metres from his home in Lilla Uppåkra outside Lund. Across the dirt road is an old church. The countryside is ravishing, with billowing fields and groves. The studio is seething with activity. Clay Ketter’s two assistants, Sy Willmer and Lars Johan Claesson, are building sculptures, preparing gypsum boards for painting and discussing various elements, projects, deliveries and schedules with the artist. On the floor above is Play Better Studios, where many of Sweden’s top musicians come to record their albums, including Timbuktu, Titiyo, Nina Persson and Joakim Thåström – but also the lesser known band The Art Farmer, featuring Clay Ketter himself on drums. The artist recently returned from New York, where he opened an exhibition at the prestigious Sonnabend Gallery. After a few days of installing, meeting people and dining, Ketter can return to what he prefers doing: art.

The contrast between the New York art scene and the studio in rural southern Sweden is perhaps not as great as it may appear. When Clay Ketter lived in New York, after finishing art school, he worked as a builder, played in bands and performed at the legendary CBGBs club. In New York he also met Swedish Jenny, and now they live here together. But art, music and friends are still the mainstays of his life, and they are not limited by geography.

The story of how Clay Ketter made his breakthrough on the international art scene when he was working as a senior exhibition technician at the Rooseum art gallery is well-known. The fact that he worked in a gallery building exhibitions early on in his career is hardly unique for an artist. What makes this story intriguing is how seamlessly the activity of building walls for other artists’ work was transmogrified into his own art. Lars Nittve is perhaps the person best qualified to tell the story. He does this in one of the texts in the catalogue, “I wonder what happened”, in which he recalls how he became convinced that Clay Ketter was not only a fine technician but also a world-class artist.

My first encounter with Clay Ketter was when I was working on the exhibition På Tiden (On Time, 1995) in the tram sheds where Moderna Museet resided while the new premises on Skeppsholmen were being built. Shortly after this, I was participating in the preparations for a seminar at Färgfabriken, Form Follows Anything, for which Clay Ketter built a huge installation together with Catharina Gabrielsson (they meet again in a discussion on 14 August this year in the After Art series). Lydmar Hotel was one of the partners in this project, and Clay Ketter was consequently commissioned to do an artistic intervention at their restaurant. This consisted of raising the tables, and many dinner guests probably experienced the feeling of being children again, with all the accompanying difficulties of sitting with the grown-ups at table. I discovered that despite his terse, not to say stern, artistic style, Clay Ketter is a man with a large portion of humour. And his work often displays playful experimentation – while still being profound and earnest – and why shouldn’t these two facets be able to co-exist?

Several of his works have been acquired by the Moderna Museet collection over the years, and when the museum was relocated yet again, Clay Ketter produced a smaller project exhibition: Moderna Museet c/o BoStad02, in Hammarby sjöstad, Stockholm. It is high time now for Moderna Museet to present Clay Ketter’s work more extensively.

The exhibition we are producing now for the large exhibition hall will not be particularly retrospective. Instead, we have chosen to start with Ketter’s current projects, and use these as a means of obtaining a slightly new perspective and interpretation of his earlier works. This approach is perhaps not so remarkable. A fundamental philosophy when we create exhibitions at Moderna Museet is to acknowledge that we are perpetually in the present time, and that when we look back it is from a contemporary vantage point – what is interesting today? But in Clay Ketter’s case we are dealing with an artist whose work has developed, with austere consistency, out of a couple of basic ideas and subjects – so that each new step seems to be more or less given – and yet he manages in some remarkable way to perpetually surprise his audience. The temptation to describe Ketter’s work as stages in a development process means that we sometimes disregard the aspects that are entirely new.

Clay Ketter’s most recent series of works, such as the doll’s house assemblages and the photo suite Gulf Coast Slabs, which depict the devastation in the wake of Hurricane Katrina in 2006, are once more architecturally based. Anywhereville, a large assemblage made of classic Lundby doll’s houses, was created especially for this exhibition. The doll’s houses are deconstructed, the walls and roofs folded back to form a large, flat painting, or possibly a bas-relief. They are arranged around a street. Four of the houses are burnt. Here, as in the Gulf Coast Slabs suite, disaster has struck. The works raise issues relating to our vulnerability, our neighbours, our fears. Although these issues have hardly been particularly acknowledged in discussions of Clay Ketter’s work until recently, I find them unavoidable in his latest series.

Back to the studio. The studio as a work place. What is produced in the studio is works, work. This may sound like a banal truism, but it is something that absorbs the artist, and which he has said quite a few interesting things about. Here, as in many other instances, Ketter operates within a tradition, developing it in a poignant way. The artist Bruce Nauman has stressed the studio as a place: “I was an artist and I was in the studio, then whatever I was doing in the studio must be art.” In Bruce Nauman’s case, this approach generated a few of his early video and performance works that now have cult status: Stomping in the Studio, in which he measures up his studio, and Art Make-Up, where the artist paints his face.

Clay Ketter is not a performance artist, and he has never made a video or a film, as far as I know. His art works are carefully composed, clearly finite objects – and yet, the process, the production and the time element, are central to Ketter, and are easy to discern and identify in his work. Take, for instance, the early Wall Paintings, his breakthrough. They consist of two gypsum boards put together, with screw heads and joins spackled over, in the way walls are habitually made. But the wall/painting has been left unpainted – or, as Daniel Birnbaum points out, the paintings are at the stage before being painted. A slightly more recent series is his Trace Paintings, paintings resembling walls being redecorated or demolished (or perhaps they are walls – spectators are often left in uncertainty about whether they are looking at a reconstruction or an authentic object, a ready-made). If the Wall Paintings were before being painted, the Trace Paintings are after – the paint, the electric sockets and tiles, have been removed, and all that remains is their traces.

One way of looking at his art is to see it as traces of human activity, artistic or more practical, such as building or demolishing. The artist Allan Kaprow, who coined the term “happening”, is perhaps not the most immediate reference when discussing Clay Ketter, but in his essay The Legacy of Jackson Pollock he writes about painting as (traces of) happening, an essay that is reprinted in his anthology Essays on the Blurring of Art and Life – a title that would seem highly relevant in this context. In a talk with the critic and curator Bruce Ferguson, Ketter is asked what the difference is between a painter who paints a wall and a painter who paints paintings – and he replies by rhetorically repeating the question: What is the difference? The catalogue that is currently being produced includes a brilliant essay by Sven-Olof Wallenstein in which he analyses Clay Ketter’s art in relation to an American pragmatic philosophy. For, despite having lived for twenty years in Sweden, Clay Ketter’s works belong to an American tradition, both philosophically and artistically. As I write, we are building a small house for the exhibition. It is a white cabin with horizontal wood panelling. The cabin has taken traits from two houses: one is the cabin where Henry David Thoreau lived when he wrote Walden – a civilisation critique and crucial book for any attempt to understand American philosophy in a broader sense; and the other is the paltry little house where Elvis Presley grew up. But Clay Ketter’s house has no windows or doors. He calls it Tomb. Clay Ketter may be a formalist, but like Thoreau he is also a critic of civilisation.