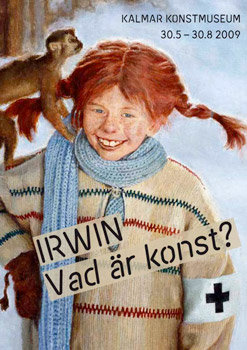 Kalmar Konstmuseum is proud to present the first solo exhibition in Sweden with the Slovenian artist group IRWIN. The group (whose members are Dusan Mandic, Miran Mohar, Andrej Savski, Borut Vogelnik and Roman Uranjek) grew out of the underground scene of Ljubljana in the former Yugoslavia in the early 1980's.

IRWIN works in a complex and subtle way with connections between art and ideology. Their work brings together art historical references, such as Romanticism, Modernism or the Suprematism of Malevich, with symbols taken from religion or totalitarian political systems, for example from the Nazi era or from Soviet social realism. IRWIN has over time built a complex system of cross references between their works and the works of other artists.

The starting point for IRWIN is that different symbols have different meanings depending on place and time. In order to examine and discover the meaning and the function of a symbol IRWIN starts work according to a method or process they have developed themselves, the retro principle. This method means that in order to understand the meaning and function of a symbol one needs to investigate its origin. A reconstruction of the meaning of the symbol implies that the meaning of the symbol is changed retrospectively through the fact that IRWIN juxtaposes and appropriates the symbols into new contexts. Thereby the symbols are given new connotations. In many works IRWIN manifests the visual and ideological similarities between seemingly different totalitarian systems, the history of art and of religion. Their work often embraces a warm humour and in many of their works there are often marked ambiguities.

IRWIN together with NSK (the artist collective Neue Slowenishe Kunst, founded in 1984 where the music group Laibach is a member) can also be said to work with the question of the importance of culture when it comes to the reconstruction of a nation. In this work IRWIN takes as their starting point the Slovenian culture and the Slovenian nation. A nation that has to take into account the fact that it is situated, geographically as well as culturally, between East and West, between Central Europe and the Slavic heritage. Collectively the works of IRWIN deals with the European history of ideas and its ideological foundations, a political and cultural heritage that has shaped Europe in the past and will shape Europe in the future.

IRWIN has exhibited extensively around the world, for example at the Venice Biennale. In Sweden they have previously taken part in group exhibitions such as Interpol at Färgfabriken in Stockholm in 1996 and After the Wall at Moderna Museet in 1999. This exhibition, mainly paintings, is specially produced for Kalmar Art Museum and contains some of the earliest works made by IRWIN from the 1980's, such as works from the series "Was is Kunst", the series "icons" from the 1990's but also the latest "monochromes".

For more info about the exhibition please contact curator Martin Schibli on +46 (0)480 426288, martin.schibli@kalmarkonstmuseum.se

Press Preview of Kalmar Art Museum Thursday 28th of May 11:00
in the presence of members of IRWIN and the curator

Saturday 30th of May
14:00 Official opening of the exhibition by the First Secretary of the Slovenian Embassy in Stockholm.
15:00 Artists in conversation; members of IRWIN on the subject of their work. The library.

Sunday 31st of May
14:00 Lecture by Conny Blom on the subject of NSK (Neue Slowenische Kunst) where IRWIN is a member.
15:30 The exhibition is presented by curator Martin Schibli.

Anna Odell, Reconstruction, until 29th July. One of the most public debated art projects in Sweden the last decade.