Earth Tones. Koblitz's travels to Azerbaijan has provided inspiration for this exhibition as she continues to explore elements of Eurasian cultural symbology that she has investigated and reinterpreted in a series of sculptural works. 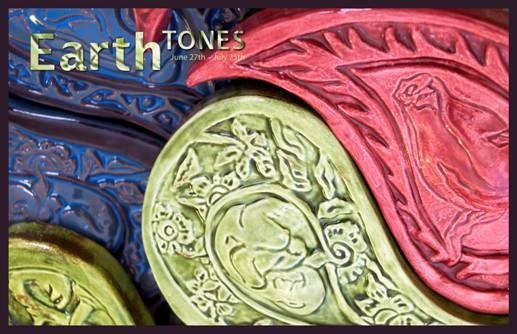 L2kontemporary Gallery is pleased to present "Earth Tones," the second solo exhibition by artist Karen Koblitz for the gallery. Koblitz's recent travels to Azerbaijan, the exotic crossroads of the Caucasus Mountains and the Caspian Sea, has provided inspiration for this exhibition as the artist continues to explore elements of Eurasian cultural symbology that she has investigated and reinterpreted in a series of sculptural works.

"The California Gaval Dashy (Tambourine Stone)", when struck creates a unique resonating sound. This work is inspired by a similar rock found amid the petroglyphs of Qobustan, which 12,000 years ago offered simple stone carvings that tell a narrative of life along the shores of the Caspian Sea. The Azeri stone was used to beat out cadenced sounds for the Yalli, the dance ancient peoples performed to insure a successful hunt. Koblitz employs her own unique imagery, painted with raw clay on the walls surrounding her stone. A percussion track accompanies the work as members of The Antenna Repairmen-Arthur Jarvinen, Bob Fernandez and M.B. Gordy-were invited by Koblitz to perform an improvisational drumming session on "The California Gaval Dashy," coercing engaging rhythms from the rock.

The Azerbaijani symbol of life is the "buta," whose contour is the natural outline of a fetus in the womb, a single cell, the brain, and a flower bud, a few images that represent life. Harmonious colorful ceramic teardrop "butas" create a pair of circular shapes on the wall. A series of simple vessels emulate objects found in ancient burials. Dotted sgrafitto patterns on the surface of these forms are repeated on the wall. These punctuated arrangements were inspired by an archaeologist's drawings that map the surface symbology found on the vessel's exterior. Images include tattoos that Koblitz, her sister and niece have inscribed on their bodies and of a swallow in flight, a meaningful symbol of freedom to Azeri weaver Abilova Qanira who Koblitz collaborated with on a series of carpets in 2006/2007.