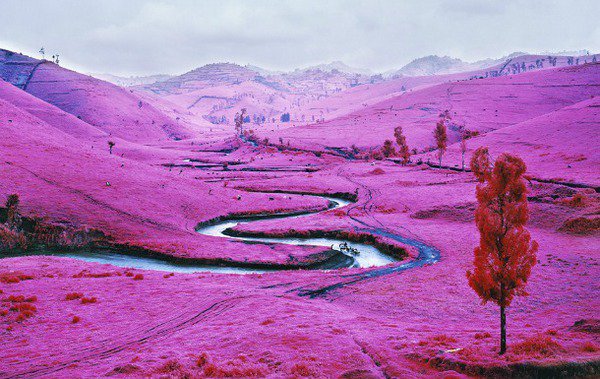 Richard Mosse will represent Ireland with The Enclave, a major new multi-media installation at the 55th International Art Exhibition – La Biennale di Venezia. The Commissioner and Curator is Anna O’Sullivan, Director of the Butler Gallery, Kilkenny, Ireland. Ireland at Venice is an initiative of Culture Ireland and the Arts Council/An Chomhairle Ealaíon.

Mosse’s practice resides at the interface between documentary journalism and contemporary art. For centuries, the Congo has compelled and defied the Western imagination. Richard Mosse brings to this subject the use of a discontinued military surveillance technology, a type of color infrared film called Kodak Aerochrome. Originally developed for camouflage detection, this aerial reconnaissance film registers an invisible spectrum of infrared light, rendering the green landscape in vivid hues of lavender, crimson, and hot pink.

Infrared film found civilian uses among cartographers, agronomists, minerologists, and archaeologists, to reveal subtle changes in the landscape. In the late 1960s, the medium was appropriated in artwork for rock musicians like the Grateful Dead or Jimi Hendrix, trickling into the popular imagination as the palette of psychedelic experience, eventually accumulating the aesthetic of kitsch.

With the collaboration of cinematographer Trevor Tweeten and composer Ben Frost, Mosse has created a highly immersive five-screen multimedia installation titled The Enclave.

The Enclave is a mythic conflation of many discrete rebel enclaves in Eastern Congo. During a period of two years Mosse, Tweeten, and Frost inserted themselves as journalists within armed groups, which fight nomadically in a war zone plagued by frequent ambushes, massacres and systematic sexual violence. Film, photography, and sound recorded during these trips have been used in the production of the Venice project.

“I am beginning to perceive this vicious loop,” Mosse writes from Goma, “of subject and object. The camera provokes an involuntary unraveling, a mutual hijack of authorship and autonomy.”Neither scripted nor directed, Congolese rebels return the gaze of Mosse’s camera in a distinctly confrontational and accusatory manner. The camera seems to mesmerize and provoke everyone it encounters in The Enclave. This precarious face-off reveals an ambiguous defiance, vulnerability, and indictment.
About the artist

A new publication entitled The Enclave, with an essay by Jason Stearns, will be published by Aperture Foundation to coincide with this exhibition.