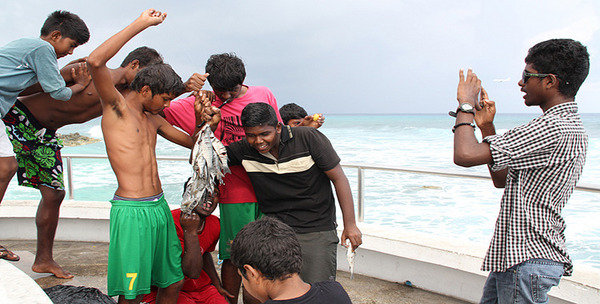 We are delighted to announce the apointment of the curator collective Chamber of Public Secrets (CPS) to curate the first Maldives Pavilion at the 55th Venice Biennale in 2013.

Portable Nation
Disappearance as work in progress – approaches to Eco-Romanticism

Climate experts are divided in their scientific opinion on the issue of climate change. The recognized opinion is that Earth’s climate system is unequivocally warming, and that it is certain that humans are causing it. Other climate scientists stand firm on their position that climate change and rising sea water levels is a recurring natural phenomenon that has become heavily politizised and misused by organizations, governments and politicians with different motives.

There is no absolute agreement in the public perception of this controversy either. However, according to one of the scientific positions, the Maldives is estimated to disappear under the ocean in the year 2080. If this is the case with this compact micro nation, we are currently witnessing the direct consequences of the global ecological tragedy in progress, perhaps making the Maldives the first movable prototype nation ready to pack up and relocate.

In order for the Maldives to appear again as a nation at another designated location / land, the Maldivians are in the process of collecting, archiving and preserving every detail of their existence.

The Maldives Pavilion is a theoretical research project consisting of several public events in the Maldives and Venice including exhibitions, publication, seminars and a documentary film. It debates environmental events related to social and cultural life, to the notion of nation without territory, climate change law and environmental politics.
Artists and contributors from around the world will be invited to contribute works related to contemporary environmental romanticism. Collectively they will form a portable micro exhibition positioned inside a transparent colorless space, easy and ready to be moved to another location as a symbol of the Maldivian case.

Our notion of the portable pavilion is based on a romantic review. It reflects how artists and thinkers from around the world share with the Maldivians the concern of preservation by presenting solutions to our ecological situation. Hence the pavilion presents a collection of thoughts on preserving and archiving the Maldivian memory and history, and a visual representation of the sinking paradise.

Chamber of Public Secrets (CPS) is a production collective of critical art and culture: an informative, non-profit, independent contributor to the global art scene.

The collective works as a network of artists, curators and thinkers who have been collaborating since 2004 in the organization, production and circulation of exhibitions, video and film festivals, art events, experimental TV and radio programs, political fictions and documentaries. CPS members also set up debate forums and talks and publish books and articles on issues like migration, mobility, representation, colonialism, gender and difference to help debate the role of art, its responsibility and its relation to society.

In the next weeks, as media partner of the Gervasuti Foundation’s program, NERO will be focusing on some of its projects: in the following days we will publish the first blogpost made in collaboration with the Joan Of Art: Towards a Free Education project, initiated and curated by Mike Watson, in which we are going to present some video clips from the opening day’s symposium held on April 13th at the MACRO museum in Rome. Here follows a brief presentation of Joan Of Art:

Joan of Art: Towards a Free Education

In residence with Gervasuti Foundation, at the Venice Biennale, 2013.

The aim of the project Joan of Art: Towards a Free Education System is to deliver a free education system, starting from the very basis of what education is: The sharing of information. In the first stages the very notion of education will be explored so that a new system can be delivered which recognises the value of sharing knowledge between peers and across disciplines, tying into the theme of an ‘Encyclopedic Palace’ – the theme of the 55th Venice Biennale – as kind of shared knowledge store, through which we teach one another.

In its first year the project has collaborated with Nomas Foundation, Macro and European Alternatives.

From late May until November 2013 the project will be continued in residence with Gervasuti Foundation – location of the Maldives Pavilion – Venice, in collaboration with Worm Foundation (Rotterdam).

Opening and closing events will include interventions from artist Harold de Bree and from the occupants of Teatro Valle, MACAO and Teatro Garibladi Aperto, delivering a talk on new educational strategies and developing a new free course on art, politics and education, to be delivered from art spaces internationally: an archive of cultural knowledge initiated during the 55th biennale, the Encyclopedic Palace.