The second edition of the city's global art fair. It presents over 180 galleries from 42 different countries. Contemporary and modern art from regions such as Asia, the Middle East and Africa will be on display by established and emerging artists. 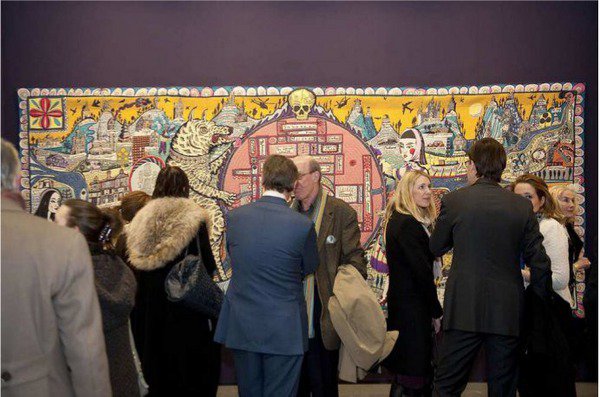 Art14 London, sponsored by Citi Private Bank, returns to Olympia’s Grand Hall in London, from 28 February – 2 March 2014. The Fair will welcome over 180 galleries from 42 countries. Contemporary and modern art from regions such as Asia, the Middle East and Africa will be on display by established and emerging artists from cities including Lagos, Berlin, Beijing, Dubai, Buenos Aires, Osaka, Mumbai and São Paulo.

Stephanie Dieckvoss, Fair Director said, “We are delighted to increase the geographical spread of countries represented. The Fair is growing organically so visitors and collectors will have a more comprehensive experience in discovering works of art from around the globe. We continue to have a strong presence from Asia with leading galleries such as Pearl Lam Galleries and Hakgojae Gallery returning. Other newcomers hail from the four corners of the world, including Triumph Gallery from Moscow, Galería Habana from Havana and Omenka Gallery from Lagos.”

The presence of leading Asian galleries marks the Fair as a significant focal point for contemporary Asian art outside of the region, which is a key component of the Fair. In addition, Art14 London features other key art scenes from around the world, such as modern and contemporary Middle Eastern art, which will have a strong presence at the Fair.

Dieckvoss states, “Many collectors and curators in London are interested in the Middle Eastern art scene. I’m delighted that Athr, based in Jeddah, who were one of the stand-out discoveries of the first edition, will return with a major presentation.” They will be joined by galleries such as The Empty Quarter from Dubai, one of the only spaces in the region dedicated to photography. Galerie Janine Rubeiz, based in Beirut, is an exciting addition to the Fair and will exhibit emerging and established Lebanese artists, while Taymour Grahne, newcomer to the New York art scene, will showcase works by Mohammed Kazem, who represented UAE at the Venice Biennial this year.

European modern and contemporary art has a central place in the Fair. Karsten Schubert Gallery (UK) will present a major work by Bridget Riley, whilst Kálmán Makláry Fine Arts (Hungary) will exhibit major works by Simon Hantaï, recently the subject of a major retrospective at the Centre Pompidou in Paris. Contemporary British gallery All Visual Arts, known for their dramatic off-site projects, will have their art fair debut at Art14 London. Paul Stolper will exhibit previously unseen works by the cult writer, filmmaker and photographer Jon Savage.

Two curated sections complement the main section, London First and Emerge. London First is advised by Belgian-based Mai Abu ElDahab, and features sixteen young galleries who have not exhibited at an art fair in London before. Jhaveri Contemporary from Mumbai will present a one- person stand of India’s most renowned photographer, Raghubir Singh. Cristina de Middel, nominated for this year’s Deutsche Börse photography prize will show her series titled ‘Afronauts’, based on the true story of the Zambian space programme, at Black Ship, New York’s stand.

Emerge is advised by Lisa Le Feuvre of the Henry Moore Institute, Leeds. Fifteen galleries will participate including El Museo from Bogota who will show the subtle works of the Brazilian artist Mauro Piva. London-based gallery Edel Assanti will showcase the work of Gordon Cheung.
Stephanie Dieckvoss concludes, “With new galleries from Africa, Latin America, Russia and North America joining galleries from Asia, Europe and the Middle East, Art14 London will continue to build on the success of the inaugural edition.”

Art14 London is pleased to announce an educational talks programme that will be staged during the Fair offering visitors the opportunity to learn about contemporary art from different and emerging parts of the world. The programme will bring together participants from the Global Private Museum Summit, Art & the City, members of the International Advisory Board as well as independent art world experts. Speakers will include Kate Rothko, daughter of the late American painter, Mark Rothko, the Indonesian collector Dr Oei Hong Djien and Ramin Salsali who owns the Salsali Private Museum in Dubai. In a series titled ’10 Things You Didn’t Know About...’ renowned art world figures will offer an opportunity to discover new artists and artistic trends from across the globe. The talks will reflect Art14 London’s global reach with 180 galleries from 40 countries presenting modern and contemporary art from regions such as Asia, the Middle East and Africa, next to galleries from Europe and the US. Artists will participate from cities including Lagos, Berlin, Beijing, Dubai, Buenos Aires, Osaka, Mumbai and São Paulo and will examine issues such as the impact that art has on the urban landscape and the increasing significance of private museums and art production in global countries.

Following the success of last year’s performances, Art14 London, is pleased to announce Art14 Performances – its continuing platform for performance at the Fair, curated by Amanprit Sandhu. This year’s programme is presented in partnership with the Zabludowicz Collection, and features artists who have worked with the Collection alongside artists represented by participating galleries at the Fair.

The Fair will also host a number of stands dedicated to non-profit institutions and feature an extensive programme of talks, projects and performances, details of which will be announced in December.
Suzanne Gyorgy, Managing Director Citi Private Bank Art Advisory & Finance said, “The diversity of galleries from around the world exhibiting at Art14 London reflects the global vision the Fair is committed to. As Art14 London’s lead sponsor, Citi Private Bank shares this international perspective, and we look forward to the truly dynamic, exciting work that these galleries will bring to London and our clients from around the world.”