How does art produce debate, contribute to a sense of the civic, or perhaps, more cynically, merely perpetuate the status quo? 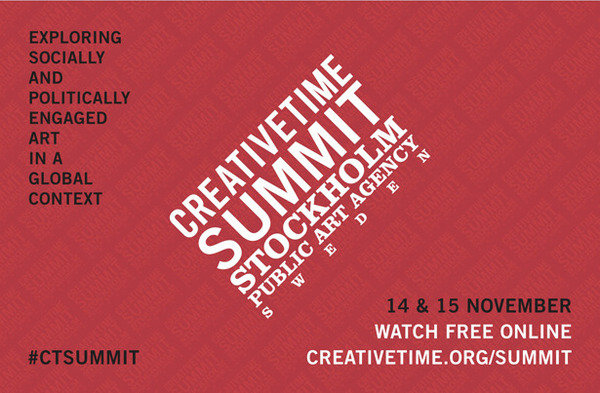 These days, it feels to me like you make a devil’s pact when you walk into this country. You hand over your passport at the check-in, you get stamped, you want to make a little money, get yourself started… but you mean to go back! Who would want to stay? Cold, wet, miserable; terrible food, dreadful newspapers – who would want to stay? In a place where you are never welcomed, only tolerated. Just tolerated. Like you are an animal finally house-trained.
from White Teeth, by British novelist Zadie Smith

In a collaboration between the New York City-based Creative Time and Public Art Agency Sweden, the 2014 Creative Time Summit will take place in Stockholm. Summit: Stockholm—the first iteration of the annual conference to take place outside of New York—will focus on expanded public practice, investigating uses and potentialities of art in the public sphere, with a focus on practices with social and political implications.

Last year’s Creative Time Summit focused on questions of gentrification and the role of the arts, both good and bad, in the making of the new city. This in turn galvanized difficult, complex, and intense discussion and debate on the issue of race in the creation of the contemporary city. This year, with the Summit transpiring in Stockholm and reflecting the larger context of Europe, it will investigate the challenges of migration, the growth of extreme nationalism and xenophobia, the uses of the public sphere, the fluid line between surveillance and our interpersonal selves, and, finally, how these challenges are met by artists who are re-imagining the public realm.

Summit: Stockholm will pose such questions as: Who is art in the public sphere for and what is it supposed to do? How does art produce debate, contribute to a sense of the civic, or perhaps, more cynically, merely perpetuate the status quo? And more generally, who is the city for and how can our public spheres and its arts work across a heterogeneous space?

With declining economies all over the continent, nationalism and xenophobia are increasingly a public reality. In recent years riots have broke out in the suburbs of large European cities, last year among them in Husby outside of Stockholm– yet another indication of the growing divides in society and within the cityscape. To say the arts are effected by these conditions is obvious. The Summit wishes to discuss the role that artists can play in producing more equitable and thoughtful responses to these conditions.

In considering these concerns, Summit: Stockholm will also investigate the role of surveillance, not only from the scale of the inter-connected globe, but also the conflation of public and private. With whistleblower Edward Snowden’s revelations of spying by the NSA through its prism operating system, the concerns of privacy and the internet are more prominent than ever. The global impact of this kind of surveillance certainly brushes up against a simultaneous global fascination with self-surveillance. While in the 1990s surveillance issues focused on cameras in public spaces, the conditions of today are that of a society of people obsessed with broadcasting themselves. What are the consequences of this, with telephones and cameras both surveilling and surveilled?

Expanded public practice has the potential to re-activate the city, to suggest alternative readings of its history and context, and to add new experiences and relations to urban life. Summit: Stockholm will bring together artists who perform new interpretations of the city, reclaiming and reformulating the ways we interact and experience each other and the built environment.

And finally, as always, the Summit will offer an invaluable opportunity for artists from a variety of disciplines who are interested in the role of art in public life to gather, meet, discuss, debate, and make connections.