Retrospective. His key works, which display a unity of theoretical, aesthetic and moral values, concern a number of general subjects. He deals with the timeliness or decline of painting; the problems of representing time, transience, symbols and everyday events. Also, Luc Tuymans created a special, site-specific mural for Mucsarnok. 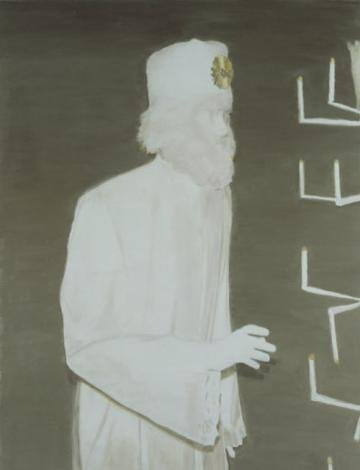 Műcsarnok will be the first art hall in Central and Eastern Europe to host an exhibition by Luc Tuymans, who is considered, by art historians and collectors alike, to be one of the most important living painters. The show will then travel to Warsaw and Munich. Besides the valuable works, the Budapest exhibition will also boast a sensational, unique attraction: Luc Tuymans will create a special, site-specific mural for Műcsarnok.

Luc Tuymans was born in 1958, in Mortsel, Belgium. Anything but a conventional artist, Tuymans, who now lives and works in Antwerp, has created a distinct style, and has inspired a whole generation of painters. Though for a time he abandoned the brush for the sake of film, his creative genius eventually returned to painting, whose idiom he has completely transformed. While respectful of the various painterly traditions, Tuymans uses his own canvases to meld painting with photo- and film-inspired contemporary visual thought. Luc Tuymans simultaneously impresses the mind and the senses. His mysterious pictures, operating with understated colours, tend to hypnotize the viewer. His vast canvases, which often represent only details of objects, explode the carefully observed sight into monumental visions; his small pictures, also featured at the coming show in Műcsarnok, usually condense monumental sights. The key to Luc Tuymans’ impact is his direction of attention and reflection. Widely travelled, the artist finds impressively varied representations for his ideas: the images are usually representations of objects, persons, spaces or lands that are related to the subject in question, but Tuymans charges them with new meanings, transforms them with new modes of painting.

His art is based on extensive research he carries out about issues of social and cultural history. His key works, which display a unity of theoretical, aesthetic and moral values, concern a number of general subjects. He deals with the timeliness or decline of painting; the problems of representing time, transience, symbols and everyday events; the issue whether power and history are personal or impersonal. Recognition of the western art world came for Luc Tuymans with the Documenta 9 festival (Kassel) in 1992, which represented him as an artist at the zenith of his career.

Since then, his works have become the treasure of the most important private and public collections from Munich to Los Angeles, and he has been featured at the exhibitions of the most influential galleries (Institute of Contemporary Art, London; CAPC Museeé d’art contemporain de Bordeaux; White Cube, London; David Zwirner Gallery, New York; Venice Biennale; Pinakothek der Moderne, Munich; Helsinki Kunsthalle; Tate Modern, London; K 21, Düsseldorf). Presenting the world-famous Belgian artist in this particular region of Europe has a special relevance, because his creative concept centers on remembering and history. Open from December 15, this display, which provides an overview of Luc Tuymans’ work, marks not only a truly exclusive event in the art life of Budapest, but a turning point in the life of Műcsarnok as well: it testifies the intention to open its doors before the stars of contemporary art, to bring those artists to the Hungarian public who can be regarded the shapers of art today.