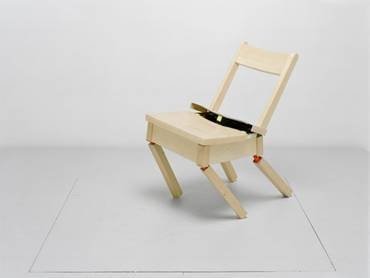 SonarMàtica splits itself in two this year for Sonar 2010 Barcelona and Sonar 2010 Galicia, two different exhibitions which can be seen in Barcelona and A Coruña on 17th, 18th and 19th June.

The Sónar 2010 Barcelona exhibition displays interesting artistic work produced using and based around the world of robotics. Robotic dogs, chairs that put themselves up and machines for drawing self-portraits are some of the curious works that will be on display at SonarMàtica 2010 Barcelona.

SonarMàtica Galicia will display two works by the Galician collective Escoitar.org, two more by the team responsible for Reactable Systems and the works of the British artist and musician Felix Thorn.

SonarMàtica Barcelona :: (Back To) The Robots

Moving into the twenty-first century, the socialisation of digital tools and the spread of creative cooperativism has made new generations of artists once again turn their attention towards robotics. The proliferation of art workshops, university departments and specialised festivals are strong evidence of today's new phenomenon of the democratisation of robotics.

A chair that folds itself up and puts itself again, surveillance robots, robots that play the violin and guide users drawing a self-portrait, robotic pet... All this and much more are featured in this year's SonarMàtica, in which the festival is again collaborating with Universitat Pompeu Fabra, the Universitat Politècnica de Catalunya and the production centre Hangar.

First of all, SonarMàtica Galicia presents the extraordinary work by the Galician collective Escoitar.org, sonic activists and well-known advocates of the benefits of technological innovation and value of social cooperation.

At the same time, the exhibition looks at the latest interactive prototypes developed by the Barcelona company Reactable Systems, which emerged from the research programmes at Barcelona's Universitat Pompeu Fabra and is the group behind the Reactable, a musical instrument that is very highly regarded worldwide.

Finally, the exhibition presents the sonic sculptures by the British artist and musician Felix Thorn, a collaborator of Plaid and a man in demand at festivals all over the world, whose work is a delight for the eye and ear, and has never before been witnessed in Spain.