The Cremaster Cycle. Cremaster Field. A Masonic builder inches up the elevator shaft of New York's Chrysler building. Down the lobby, five Chrysler Crown Imperials enact an auto-destructive ritual. On the top floor, the architect (played by Richard Serra) awaits a confrontation with his challenger. 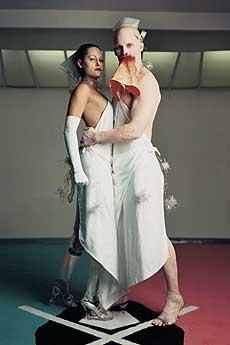 Artangel at The Ritzy
25 October - 14 November

A Masonic builder inches up the elevator shaft of New York's Chrysler building. Down the lobby, five Chrysler Crown Imperials enact an auto-destructive ritual. On the top floor, the architect (played by Richard Serra) awaits a confrontation with his challenger...

With his new three-hour film Cremaster 3, acclaimed US artist Matthew Barney has completed the epic Cremaster Cycle - the most debated, most celebrated film project by a contemporary artist over the past decade.

Heralded as a 'masterpiece' by Variety, Cremaster 3 crafts an elaborate tale of creation and destruction, a psycho-sexual odyssey of competing drives and desires which shifts in time and space from the Chrysler Building to the Giants1 Causeway.

Alongside the only UK screenings of Cremaster 3 in the beautiful 30s interior of the Ritzy's main cinema, Barney has customized the lobby with a new sculpture - Cremaster Field - made on site with ten tons of Vaseline and a pentagram of plasma screens.

For the first time, the entire Cremaster Cycle of five films will be screened in sequence. Stretching from Barney's home town football stadium in Boise Idaho to its tragic climax in the Budapest State Opera, House, via the Salt Flats of Utah and the TT course in the Isle of Man, The Cremaster Cycle offers a unique, unparalleled cinematic experience.

Matthew Barney
Matthew Barney was born in San Francisco in 1967 and now lives and works in New York. Following early shows in New York and at the 1992 Documenta, Barney began The Cremaster Cycle with Cremaster 4, co-produced with Artangel in 1994. Cremaster 1 was completed in 1995, followed by Cremaster 5 in 1997 and Cremaster 2 in 1999.

The Cremaster Cycle exhibition, organised by the Solomon R. Guggenheim Foundation of New York, is showing at the MusÃ©e d1Art Moderne de la Ville de Paris from 10 October 2002 to 5 January 2003.

Presented in London by Artangel in association with Time Out, Zoo Cinemas and The Ritzy

The presentation of The Cremaster Cycle and Cremaster Field has been made possible by the generous support of:
Quercus Trust
and
The Cremaster Circle
Charles Asprey, Alex and Angela Bernstein,
Benjamin Brown, Joe and Marie Donnelly,
Barbara Gladstone, Luca Marenzi, Kaveh and Cora Sheibani, Peter Wheeler and Pascale Revert,
Anita and Poju Zabludowicz.

Matthew Barney in discussion
Saturday 26 October
Screening of Cremaster 3 starts at 1.45pm, followed by a question and answer session with the artist