A two-day interdisciplinary event. Encompassing and blending a variety of forms including theater, dance and music, Site Fest investigates the neighborhood as an unfolding collaborative actions enacted in urban space. Over 75 performances will take place at the hub venues, and more than 30 at satellite spaces. Arts in Bushwick will also present ionSound, a two day music festival. 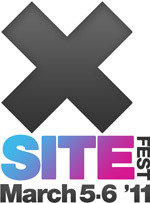 Arts in Bushwick is pleased to announce the third annual SITE Fest.

Performance artists, dancers, and musicians will offer a condensed, two-day sampling of work from the burgeoning arts scene of Bushwick, lauded by the New York Times as “arguably the coolest place on the planet.” SITE Fest focuses around four hubs that have swiftly become major forces in the Brooklyn art scene: Chez Bushwick, Grace Exhibition Space, The Bushwick Starr and 3rd Ward.

Over 75 performances will take place at our hub venues. Chez Bushwick will host a variety of dance and movement performances, including Regina Nejman & Company and Mari Meade Dance Collective. Join ConLab at the Bushwick Starr for #loveislove, a theatrical look at social media presence, the business of sports, and one athlete’s search for the love of the game. Arm and El Beau will investigate regional identity in Acres of Clams, a tour of Washington State told by a pioneer guide and her backup band of maverick loggers.
At Grace Exhibition Space, Anya Liftig will challenge the boundaries of her own body and mind, confronting deeply embedded fears in Prove My Love. For the first time, SITE Fest will feature performance documentation from far and wide at 3rd Ward. Catch Shahar Marcus’ video Freeze and see ice carved chess pieces give way to time and myth.

In addition to the hub shows, SITE Fest will include more than 30 unique performances at satellite spaces: apartments, studios, street corners, gardens, and galleries. Do you pine for inner tranquility? BabySkinGlove welcomes you to join hourly spiritual retreats throughout the weekend, ending with raves and ceremonies for the ultimate Zen experience. At Regina Rex, SKOTE will explore the mystique and history of female rockers through a pop culture soiree.

Arts in Bushwick will also present ionSOUND, a two day music festival at Goodbye Blue Monday, featuring Comandante Zero and Pezzettino. Celebrate the start of the weekend with the SITE Fest Opening Party on Friday, March 4, at Brooklyn Fireproof, headlined by the infamous band Not Blood Paint. On Sunday, come to Arts in Bushwick Is In to tell us what you really think about our neighborhood.

About Arts in Bushwick
Arts in Bushwick is an all volunteer organization that serves and engages artists and other neighborhood residents through creative accessibility and community organizing. It is our goal to create an integrated and sustainable neighborhood, and to bring together all Bushwick residents and stakeholders to counter development-driven displacement. SITE Fest is organized by Chloë Bass.

SITE Fest organization
222 VARET STREET #3C, BROOKLYN, NY 11237
Admission is a suggested donation of $5 per hub show, $10 for a day pass, or $15 for a weekend pass. Tickets and passes can be purchased at hub spaces throughout the weekend.