For this exhibition, Farmer transforms the Gallery into both studio workshop and theatrical space where an assembly of performers and mechanized objects act out a scripted narrative in the form of a sculptural tableau. 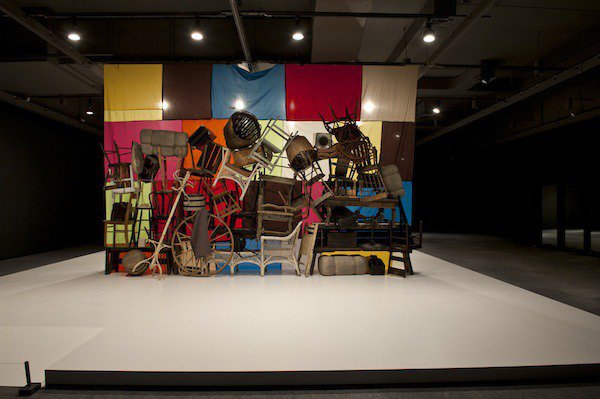 Regarded internationally for his cumulative, research-based projects, Farmer creates context-specific sculptural works that grapple with his longstanding interest in the relationship between art objects and theories of drama and dramatization. In doing so, Farmer mines a diverse array of literary and artistic histories to reveal the pervasiveness of theatricality within cultural experience. Rather than adhere to the convention of exhibitions as static displays, Farmer reconstitutes the gallery space as a site for improvisation, movement, alteration and accumulation.

For this exhibition, Farmer transforms the Gallery at REDCAT into both studio workshop and theatrical space where an assembly of performers and mechanized objects act out a scripted narrative in the form of a sculptural tableau. Starting mid-February, Farmer is in residence to work on-site and create a new site-specific "sculpture play" titled Let's Make the Water Turn Black in response to the region's social history and Los Angeles' influence on the counter-cultural movement. The exhibition begins on February 18 with a series of discrete installations on an architectural façade built to separate the central gallery from the REDCAT lobby. These revolving installations act as a prelude to the first public presentation of Farmer's sculpture play on March 5, 2011, when visitors are invited to enter the central gallery space for the first time.

Let's Make the Water Turn Black borrows its title from a song released in 1968 by The Mothers of Invention, a band led by Frank Zappa that embodied the cultural spirit of the era in Los Angeles. Farmer's installation uses the song as a starting point for a new narrative that casts a recreated copy of Isamu Noguchi's monumental stone sculpture To the Issei (1983), located in the nearby plaza of the Japanese American Cultural & Community Center complex in Little Tokyo, as the central protagonist. A large platform consumes the gallery and acts as a stage for kinetic sculptures to perform a script based on themes adapted from traditional Japanese theater and the history of the counter-cultural movement in Los Angeles. Farmer's interest in Kabuki's "off-kilter" acting style is brought into focus around a similar off-balance approach that defined the history of experimentation with kinetic art, Happenings, and the ethos of art-making in the 1960s and 70s. Let's Make the Water Turn Black uses found and composed objects, props, theatrical lighting and recorded sound to find formal similarities in otherwise disparate cultural histories.

This exhibition is funded in part with generous support of the Audain Foundation.

Gallery at REDCAT aims to support, present, commission and nurture new creative insights through dynamic projects and challenging ideas. The Gallery presents five exhibitions every year, often of newly commissioned work, that represents the artist's first major presentation in the U.S. or Los Angeles. The Gallery also maintains an active publishing program producing as many as two major monographs per year. Proceeding from the geographic and cultural specificities of Los Angeles, its program emphasizes artistic production of the Pacific Rim—namely Mexico, Central and South America and Asia—as regions that are of vital significance to California. The Gallery aims to facilitate dialogue between local and international artists contributing to a greater understanding of the social, political and cultural contexts that inform contemporary artistic practice.