A program developed jointly by staff of the Auditorium du Louvre and Fiac, presents 3 exceptional performance pieces. Claude Closky, Dan Graham, and the collaborative duo Marie Cool and Fabio Balducci successively inhabit the museum's auditorium, filling the stage with a complex of strong gestures, where language, body and image together generate a multitude of unexpected configurations. 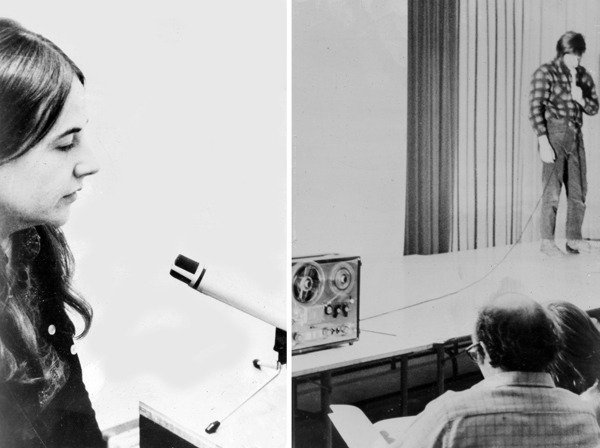 Contemporary artists at the Louvre in 2011
In 2011, the Louvre is playing host to a number of artists and events: an exhibition of works by English sculptor Tony Cragg, a series of unpublished photographs by Italian artist Mimmo Jodice, an intervention by Israeli artist Michal Rovner, and the FIAC art fair. And our guest of honor this season is author Jean-Marie G. Le Clézio.
The FIAC art fair in the Jardin des Tuileries

Since 2006, the Louvre has organized exhibitions and events each year in collaboration with FIAC as a natural consequence of the museum’s policy of openness to contemporary art, launched in 2003 by Louvre president and director Henri Loyrette and implemented by Marie-Laure Bernadac, curator in charge and special advisor on contemporary art at the museum.

For the fourth consecutive year, “Ouvertures / Openings” (October 21–23, 2011), a program developed jointly by staff of the Auditorium du Louvre and FIAC, presents three exceptional performance pieces. Claude Closky, Dan Graham, and the collaborative duo Marie Cool and Fabio Balducci successively inhabit the museum’s auditorium, filling the stage, and sometimes occupying the seating area as well, with a complex of strong gestures, where language, body and image together generate a multitude of unexpected configurations.

With Private View (2006–2011), Claude Closky presents a piece never before seen in public, conceived for the theater and staged for this presentation by Yves Lefèbvre (in the form of fragments). Numerous displacements are at work in this close-textured cut-up project, which speaks to the plasticity of words in the visual arts.

The program continues with a reprise of Dan Graham’s landmark performance piece Lax / Relax (1969), a subtle body experience triggered by the hypnotic repetition of language.

Lastly, over the course of an entire day, Marie Cool and Fabio Balducci lay claim to the auditorium with a series of pieces freely staged throughout the venue and presented in continuous fashion. In the form of sets of understated and deceptively simple actions, these works occupy the space as living sculptures.

Also in collaboration with FIAC 2011, some twenty contemporary sculptures are presented in the Tuileries gardens, which also serve as the fitting backdrop from September 8, 2011 for a monumental sculpture in wood, clay and metal by the Argentine artist Adriàn Villar Rojas, Poemas para terrestres (Poems for earthlings, 2011), under the aegis of SAM Art Projects.
Jean-Marie G. Le Clézio, the Louvre’s Guest of Honor

In November 2011, the Louvre’s special guest curator is Jean-Marie Gustave Le Clézio, who thus follows in the footsteps of Pierre Boulez, Umberto Eco, and Patrice Chéreau. Starting from the postulate “museums are worlds,” the 2008 winner of the Nobel Prize in Literature brings a fresh perspective to bear on the Louvre’s collections, with a multidisciplinary program of events in the museum’s galleries and the auditorium: talks and debates, concerts, film screenings, plays, readings, etc.

J.-M. G. Le Clézio is also organizing an exhibition that revisits the Renaissance notion of a “cabinet of curiosities,” bringing together a varied group of works ranging from historical paintings to contemporary canvases, French revolutionary prints to Haitian paintings, and woven mats from the Vanuatu islands to voodoo objects, to name but a few of the categories represented.

On Friday, November 18, as an event in the Auditorium du Louvre’s “Face to Face” series, Pascale Marthine Tayou addresses the question of his own status as an “international African artist” while examining the identity contradictions created by globalization. Then on Friday, December 2, Camille Henrot presents her experimental film “Coupé/Décalé,” created from footage shot during a long odyssey through the Vanuatu archipelago, a region cherished by J.-M. G. Le Clézio. At this screening, the artist joins the anthropologist Monique Jeudy-Ballini and the writer Federico Nicolao to exchange ideas on the fascination with other places, to raise questions on the reception and appropriation of cultural images, and to explore the ambiguities of cultural self-presentation.

The Louvre pursues its commitment to contemporary art by programming a number of exhibitions in this vein throughout the year. Until the end of October, the Israeli artist Michal Rovner intervenes in the Cour Napoléon and the galleries of the Department of Near Eastern Antiquities, in particular with her Makoms, edifices built by Israeli and Palestinian masons working side by side using stones collected from the rubble of houses in towns and cities throughout the region.

Under I. M. Pei’s famed pyramid, an exhibition space designed for the installation of contemporary works, Tony Cragg’s Versus (2010) is presented as the highlight of the exhibition Figure out / Figure in (January 28–April 25, 2011). Finally, in April 2012, Wim Delavoye is the subject of a monographic exhibition mainly comprised of new works and in May, an invitation is extended to the writer and filmmaker Jean-Philippe Toussaint, who organizes a series of events in the Auditorium du Louvre.

Auditorium, direct access under the Louvre Pyramid
October 21st and 22nd: booking from September 21st until October 20th by email: fiac-auditorium@louvre.fr
October 23rd: free entrance
Tickets withdrawal on the performance day, from 9am until 1 hour before the beginning of the performance, at the Auditorium ticket office, under the Pyramid