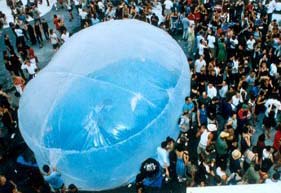 Opening July 2, 2000, P.S.1 Contemporary Art Center will present its least visual exhibition -Volume: Bed of Sound. Volume is a presentation of sound in two parts: an exhibition of approximately 60 sound artists presented through headphones; and, in an adjacent gallery, a space designed floor-to-ceiling with speakers for individual and group sound art presentation. A vast number of additional artists will be represented in ARC:arc, an audio archive.

Volume is on view throughout the summer as an integral part of Warm Up, P.S.1's popular outdoor DJ/music series. Comprised of sound-installations and audio-pieces, the indoor exhibition will combine essential historical works such as the sound effects tracks from Apocalypse Now! by Oscar-award-winning sound designer Walter Murch and a compilation of excerpts from 70's audio-installation by Vito Acconci along with audio works by contemporary artists addressing the current trend of 'sound art'. Among the many highlights and firsts of Volume will be world premiere pieces by Laurie Anderson Ryuichi Sakomoto, AACM founder Muhal Richard Abrams, disc jockey Steinski, the Finnish electronic group PanSonic, Sonic Youth, Throbbing Gristle founders Chris & Cosey, Matt Heckert of Survival Research Laboratories, and a new "music box" project by composer Butch Morris.

Another important component of Volume will be ARC:arc, the archive of audio archives providing the soundtrack to the cafe. Contained within ARC:arc's CD jukebox will be influential compilations of sound art including the Futurists, Zona, Harry Smith archive, Just Another Asshole, State of the Union, Murmurs, and Tellus as well as seminal works by such composers as Edgard Varese, Iannis Xenakis, Lejaren Hiller with John Cage, Toru Takemitsu, Jerry Hunt, Harry Bertoia and David Tudor.

Volume is curated by P.S.1 Executive Director and Deputy Director, MoMA, Alanna Heiss and composer, musician and sound art producer, Elliott Sharp with the curatorial consultants John Head, Russell Haswell, and agnÃ¨s b. The catalog, on CD-ROM, will include a text introduction by Max Neuhaus, a pioneer of sound art.

Volume will expose the roots of sound discovery in an art context. This approach will allow the audience to draw parallels to the live DJ's and performances in the outdoor galleries. Many artists included in Volume will explore the sonic foundations of contemporary music.

Sound artists will be presented in dual formation: walking through the space of P.S.1's expansive first floor north and west wing galleries the visitor will be exposed to minimal visual stimuli. Only the audio delivery system (headphones in the north, floor to ceiling speakers in the west) will be visible in the main galleries. Each contributor will have the same technical parameters of sound projection and volume with the works presented in the form of compact disc.

Volume is made possible thanks to the generous support of Maria Rosa and Gilberto Sandretto.

Running concurrently at P.S.1 will be Warm Up 2000, Max Neuhaus: Drawings, Around 1984: A Look at Art in the Eighties, Projects by Jonathan Bepler, Carola Dertnig, Amy Gartell, Fassih Keiso, Christian Marclay, and Ugo Rondone as well as portions of Greater New York.

In the main entrance of P.S.1, Ugo Rondinone presents So Much Water So Close to Home. His claustrophobic installation of fake-wood paneling and PVC emits voices from embedded speakers. Windows are fixed with mirrors and give the illusion of tunnel-vision.

For P.S.1, Jonathan Bepler has composed a minimally visual, 4-channel speaker installation that emanates a one-hour loop of organic and synthetic sound. The sounds from each speaker play off one another, so that each speaker takes on a different "personality." The quadrophonic system allows the music to rotate around the listener producing a physical effect in the "viewer" which evokes the visual.

In a historical return to P.S.1, Christian Marclay presents his work of broken records, which debuted at P.S.1's Clocktower Gallery in 1987. Approximately 1,500 12-inch vinyl records tile P.S.1's first-floor hallway flush against one another. Initially, the records will be unbroken. During the course of the summer, the records will be crushed as the public walks over them.

The first video ever produced by Pipilotti Rist, I'm Not the Girl who Misses Much, (1986) shows the blurred image of the artist singing over and over again the title from a John Lennon song. Her breasts are exposed, as shedances around like a marionnette at high speed. Her voice and image become distorted as the video changes momentum, the overall effect being both humor and neurosis.