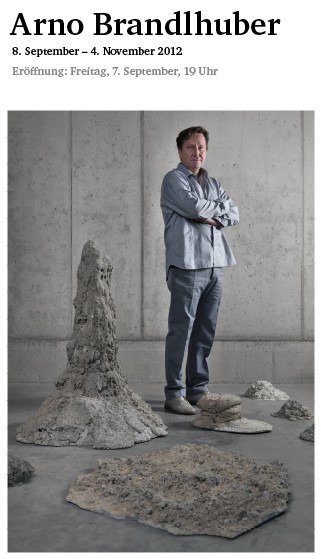 The dismantling of the exhibition, as part of the concept by Arno Brandlhuber, is open to the public. In his intervention Archipel at n.b.k., Brandlhuber takes concrete as the basic raw material in order to draw his dystopia of contemporary Berlin: by heaping up concrete in the exhibition space a walk-in sculpture was arising, an abstract urban landscape of Berlin, consisting of imaginarily connected units. Based on Oswald Ungers' manifesto The City in the City (1977), the present situation of Berlin in terms of urban policy and urban planning has been explored in discussions and events. At the closing event on Sunday, November 4, 2012 at 8 pm, for the first time in 18 years, Ornament & Verbrechen will perform new site-specific sound pieces. The music project Ornament & Verbrechen -named after the essay of Viennese architect Adolf Loos- was founded in 1983 in East Berlin by brothers Ronald Lippok (b. 1963 in Berlin, musician and artist) and Robert Lippok (b. 1966 in Berlin, artist and set designer). Over the last 20 years, various music projects emerged from it, as well as solo projects by the musicians. Their music performance intervenes, just like Brandlhubers concrete landscape, in the current urban development policy in Berlin.