Requiem NN. The film documents a rituals, unique in all of Colombia, in which a community defies the culture of violence by keeping the memory of the disappeared alive 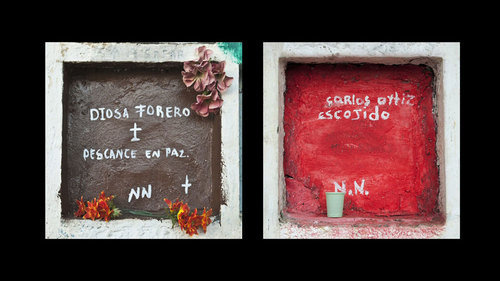 Since 2006, Colombian artist Juan Manuel Echavarria has traveled to the cemetery of Puerto Berrio, on the banks of the Magdalena River in Colombia, to document, first in photographs and now in film, how local townspeople reclaim unidentified victims of the country's half-century-long drug wars. The locals give these anonymous victims new names, decorate and visit their graves, and honor their memory as one would a lost family member-all because, according to their faith, this care and attention to the unidentified corpses, called No Names (NNs), guarantees divine protection and special favors. The film documents these rituals, unique in all of Colombia, in which a community defies the culture of violence by keeping the memory of the disappeared alive. From 2006 to 2012 Echavarria, who lives and works in Bogota' and New York City, expanded the photography series Novenarios en espera, which depicted the decoration of the NN tombs. Shot in the same locale, Requiem NN is his feature debut. Organized by Sally Berger, Assistant Curator, Department of Film. (Image: Requiem NN. 2013. Colombia. Directed by Juan Manuel Echavarria. Print courtesy of Lulofilms)