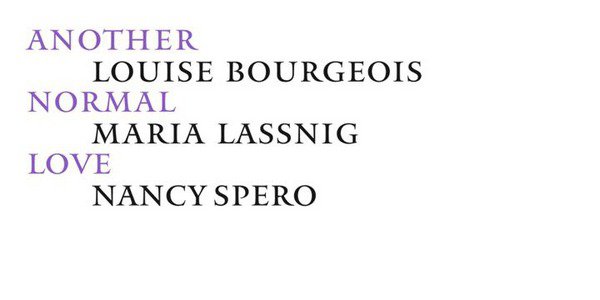 At Barbara Gross Galerie I saw a postcard from the 1980s which read: I'm not searching for an identity, I have too much identity. It was quoting Louise Bourgeois. The way that she inverted the infamous search for identity from the 1980s from 'too little' to 'too much' immediately seemed programmatic to me. Not only of Bourgeois's work, but of that of a whole series of female artists with whom Barbara Gross has worked over the years. A loose group, organized around different forms of that 'female' aesthetic' whose existence was interrogated by Silvia Bovenschen in the mid-1970s. An aesthetic that developed out of the social territories that had been defined as female, but here were brought to public attention: in body parts, in family constellations, in mythologies. A purposeful aiming at 'too much' female identity. An aesthetic of revelation rather than withdrawal, in which one's own attributes-the imputed, the discovered, and the fictional alike are tightly consolidated: into Spero's present-day mythologies, Lassnig's unique viewpoints, or Bourgeois's psychological interior spaces. A far-reaching artistic publication of what society had privatized as interiority. Tuesday, April 7, 2015, 7 p.m.