The artist's hybrid work plunges the visitor into noise music and visual environments which at times border on a utopian architecture hung within a contemplative atmosphere. 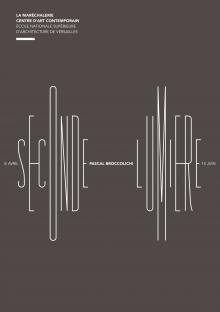 The composite work of Pascal Broccolichi is rooted in an approach focused on sound he uses as a vocabulary of forms to sculpt the unrepresentable. Subtly combining poetry and technology, he immerses the viewer in visual and acoustic environments, echoing an utopian architecture suspended in a contemplative atmosphere. “Treating the unseen as a real art object” quoting Thierry Davila, the sounds gathered by Pascal Broccolichi become the unbound archive of a space as well as matter or an event reintroduced in installations. These works often replayed and transformed, are like episodes in evolution throughout each exhibition.

At La Maréchalerie, the artist invests the visible and invisible space, working with the sound, light and structure of the building, immersing the art centre in the semi- darkness of an acousmatic sound environment. There he stages a “wave theatre”, a territory revealing physical as well as psychic phenomena, where an in situ apparatus of two co-existing works is staged, one inside the other, complementary as well as simultaneous.

The first, Hyperprisme 4 (2015), confronts the viewer with a great black wall pierced with 20 acoustic horns. Using hydrophonic and electromagnetic recordings taken in Versailles castle’s pools, Pascal Broccolichi imagines a sonic architecture with a large acoustic mirror echoing the glass spheres of the work Espace résonné (2013). Recorded within a range of frequencies non-perceptible by the human ear, the waves do not feature recognizable sounds but energy fluxes of a very slow pace.

Thus, the second work Espace résonné literally dialogs with the monumental installation. The project was developed over two years with the CIRVA team (International centre of research on glass and visual Arts in Marseille) from the complex sound phenomena of “the infinite harmonic”: it features two blown glass spheres composed with acoustic resonators capturing and reproducing the resonance frequency in the exhibition space. This effect provokes a chain reaction and a looping of the whole sound system.

Like a perpetual ecosystem, the acoustic matter contained in Hyperprisme 4 is absorbed by the spheres of Espace résonné, self-supplying it infinitely, allowing the viewer to experience a different temporal and spatial perception.

Opening Hours:
Open everyday except Mondays and public holidays, from 2pm to 6pm and in
the morning by appointment.
Exceptionally closed from April 27th to May 3rd.