A Journey into the Uncharted 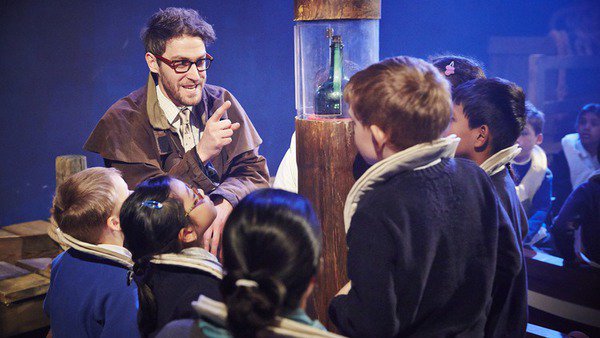 Against Captain's Orders: A Journey into the Uncharted. There's a catch, though: 'Against Captain's Orders' is in fact the work of Punchdrunk Enrichment, the company's learning-centric spin-off, and is running not in a hip abandoned warehouse but the basement of the Greenwich Maritime Museum. And the bad news for the nerdier elements of Punchdrunk's fanbase is that entry is pretty much determined on whether you've successfully procreated: the show is for six-to-12-year-olds only, plus accompanying adults. And you can be assured that no men were drowned in the making of this show. If that all sounds alarmingly educational then fear ye not - Peter Higgin and Katy Balfour's production of Simon Davies' sturdy script is gently subversive, but defined by its unironic and wholehearted love of the idea of Going On An Adventure. Adults will enjoy the air of old-fashioned derring-do and marvel as they wander through Livi Vaughan's gloriously detailed, junk-strewn sets. But really, this is one for the kids. It isn't Punchdrunk's most sophisticated show, but as far as I could tell every single tween in the room got into the swashbuckling spirit, and that's basically all that counts.