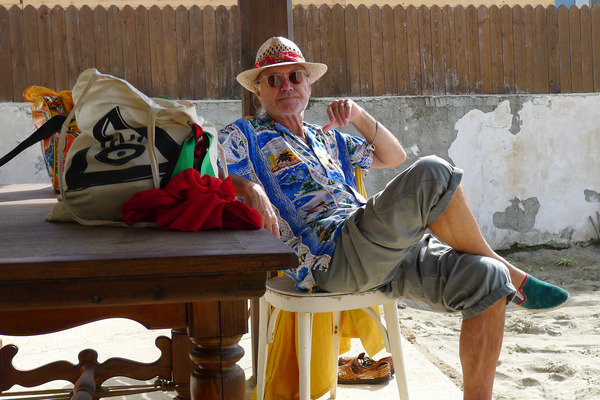 Lebanese independent music label Ruptured presents in September 2015 no less than 3 concerts with renowned British folk singer and performer MIKE COOPER, held in Beirut in different venues. The second of these concerts is taking place at Beirut Art Center, and features an impressive line-up of local and foreign musicians accompanying Mike Cooper for a performance of his piece Beach Crossings.

Beach Crossings is an audiovisual performance written by Mike Cooper over the course of several years of traveling in Asia and the Pacific. It consists of a meditation in words and music on European presence and influence in Asia and the Pacific area.
It was originally commissioned by radio producer Pino Saulo for RAI3 Radio in Italy, who suggested an audiovisual performance which would include the Bob Dylan song Masters of War, a version of which closes the piece. Beach Crossings is performed live, with a flexible number of musicians. There have been live versions in Palermo, Sicily and Lisbon in Portugal, and a radio version commissioned for Australian public radio.

Mike Cooper is a virtuoso British guitarist who is best known for his folk-blues styles, and avid experiments with electronic, world, and avant-garde music. For the past 40 years, Cooper has been an international musical explorer, performing and recording, solo and in a number of groupings and a variety of genres. Initially a folk-blues guitarist and singer songwriter, his work has diversified to include improvised and electronic music, live music for silent films, radio art and sound installations. He is also a music journalist, writing features for magazines, particularly on Pacific music and musicians, a visual artist, film and video maker, and appears on more than 60 records to date.