Things to walk away with. For the exhibition the artist presents an installation encompassing 30 years worth of collected objects. Each object reflects Lemieux's ongoing exploration into the realms of memory and meaning. 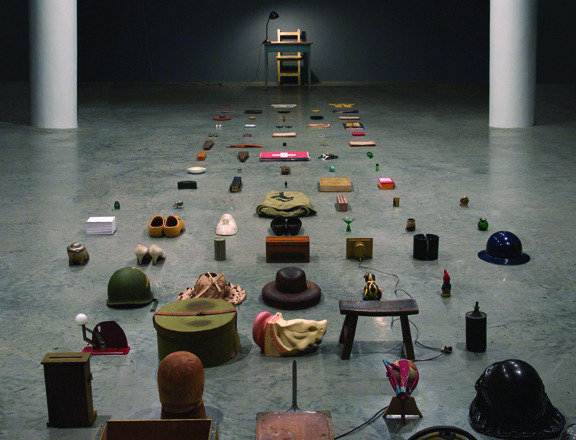 Fisher Landau Center for Art is excited to announce the presentation of Annette Lemieux’s Things to walk away with, an installation encompassing 30 years worth of collected objects initially exhibited in 2011 at Harvard University’s Carpenter Center for the Visual Arts. Independent curator Lelia Amalfitano has noted that the objects “…had been selected because they inspired past works or were waiting to be included in future works. The experience of revisiting objects that informed the conceptual framework of her process led Lemieux to a singular way to reconstruct meaning.” Occupying the entire 1st floor gallery of the Center, the installation references the layout of the 12th-century Chartres Cathedral, presenting nearly 100 objects precisely arranged as a grid work according to ascending height.

Each object reflects Lemieux’s ongoing exploration into the realms of memory and meaning, allowing viewers to expand the narrative through their active participation in a shared interpretation. As Amalfitano stated “…these sentient things create a cacophony of spontaneous dialogues suggesting a potential future. But as in any effort to discern truth their reality remains obscured, their story unfinished.” Things to walk away with provides a dramatic setting to showcase a segment of Lemieux’s artwork that many viewers have never experienced. In conjunction with the installation several iconic pieces by Lemieux from Fisher Landau Center for Art’s collection act as sentinels to Things to walk away with, including “Sleep Interrupted” (1990/91), “Vital Organ” (1986), “Where Am I” (1988) and “Black Mass” (1991).

The exhibition is made possible in collaboration with Kent Fine Art, New York.