The international selection committee has invited 73 participants from Germany, the UK, France, Greece, Ireland, Italy, the Netherlands, Austria, the US and Switzerland: they will be showing the latest developments in modern and contemporary art. The participants were selected for their daring programmes, their mentality and urge for renewal. 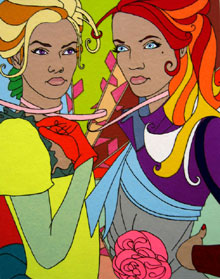 An international podium for modern and contemporary art

From 16 through 20 February 2006 the Cruise Terminal in Rotterdam will be turned into an international stage for current and contemporary art. Art gallery owners from countries such as Germany, England, France, Greece, Ireland, Italy, the Netherlands, Austria, the United Stated and Switzerland will show various works of photography, painting and sculpture. An international committee will select the participants based on their daring programming, mentality and push for renewal.

In the Netherlands, Art Rotterdam has grown into the fair to visit for modern art. Art Rotterdam is known for its high level of quality, its young and dynamic character, and a growing number of international galleries. Art Rotterdam is also the meeting place for art lovers who want to keep up on the developments in the modern art world.

Tiina Mielonen (Finland, 1974)
Tiina Mielonen paints expressive landscapes on plexiglas. Tiina’s paintings are usually based on postcards and other printed matter which reflect a sort of pop culture. Mielonen often tends to paint her subjects in an unexpected light.

Cristian Andersen, (Denmark, 1974)
Cristian Andersen’s work is often situated in the borderland between civilisation and nature, in an urban no man’s land and in deserted places at city-fringes. Andersen combines these settings with current as well as historic symbols. The melancholic, romantic and sometimes also surrealistic compositions find their form in detailed drawings and sculptures as well as in computer-manipulated photographs.

Martin Healy (Great Brittain, 1967)
Martin Healy is a photographer and video-maker who explores the psychological space of childhood and adolescence.

Germaine Kruip (Holland, 1970)
In Germaine Kruip's work, the position of the spectator is always under scrutiny. Typically, she transforms the spectator's role into that of participant. Through subtle interventions in the existing surroundings of the exhibition space (making use of special lighting, for example, or the introduction of actors), she transforms the active role of the spectator: instead of viewing or gazing, he/she will experience a heightened sense of self-awareness. By staging and directing, Kruip unveils the mechanisms at play within the boundaries of institutional structures.

Louis de Cordier (Belgium, 1978)
The work by Louis De Cordier (Belgium '1978 ) can be interpreted in multiple ways. His work is a mixture of architecture, nature, art, technique and science.
His modules and installations are strongly linked to nature. Each module is a place to live in, to survive in while being protected from the outside world and the elements. The modules can be transported to another place, just like in nature some animals carry their house.

During Art Rotterdam these 5 artist will be presented a special stand. The members of the jury: Joep van Lieshout (artist), Carlo Bach (creative director illycaffe'), Hans den Hartog Jager (journalist NRC Handelsblad) and Ronald Blom (chairman of the board of ENECO Energie) selected these 5 nominees and will choose the ultimate winner. The winner will be announced at Art Rotterdam on Wednesday February 15th,, 19.30 hours. The most promising artist will receive a cash amount of € 10.000,-

For the first time Art Rotterdam will be collaborating with Villa Zebra, the Rotterdam children’s museum. On Saturday and Sunday they will be a children’s day, where child day care will be organised in an artful way. A programme has been specially put together programme for boys and girls four years and up at Villa Zebra. There will be an exhibition of Ted van Lieshout, the well-known children’s book writer and illustrator.