4 main project, 80 artists. Plus special guests, special projects, and a parallel program. Unlike the 1st Moscow Biennale, the international team of curators will present a number of different shows produced by individual curators or groups of curators instead of a common collective project. Commissioner of the biennale - Joseph Backstein. Curators of the main project: Joseph Backstein, Daniel Birnbaum, Iara Boubnova, Nicolas Bourriaud, Fulya Erdemci, Gunnar B. Kvaran, Rosa Martinez and Hans Ulrich Obrist. 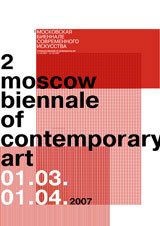 Footnotes on Geopolitics, Market, and Amnesia

The Ministry of Culture and Mass Communications of the Russian Federation, the Federal Agency of Culture and Cinematography, the Government of Moscow, GMVTs ‘ROSIZO’ and the Artistic Foundation ‘Moscow Biennale’ present the Second Moscow Biennale of Contemporary Art which will take place from 1st March until 1st April, 2007.

Main places where the biennale will take place: The Tower of the Federation in Moscow-Citi, Trade house TsUM, the Shusev Museum of Architecture, NCCA, Zurab gallery, and also the most significant exhibition spaces in Moscow. The international group of curators is to present not a united project but rather a series of exhibitions prepared by the curators individually and in groups. They will all be united by the theme ‘FOOTNOTES: geopolitics, markets, amnesia’ and will present the works of over 100 artists from 35 different countries. The organizers are of the opinion that the structure of the main project, which one can figuratively compare to a book divided into paragraphs, will help the public to look at the stated problems from various points of view. In the exhibition projects the curators are calling for ‘remarks’ or ‘footnotes’ which lie outside of the global text. The addition of these thoughts is nothing other than a critical analysis of the general idea of international biennials.

Exhibitions of the main project:
Joseph Backstein
JUST FOOTNOTES? (Art in the era of social Darwinism)
The very theme ‘FOOTNOTES’ refers to the problem of finding the place that modern art is trying to occupy in today’s world and its significance as a universal commentary on all things happening in the surrounding reality.
Place of event: Tower of The Federation.

Daniel Birnbaum, Gunnar B. Kvaran, Hans Ulrich Obrist
USA: AMERICAN VIDEO ART AT THE START OF THE THIRD MILLENNIUM
The artists whose works are presented in an exhibition learn everydayness, analyze the social and political mechanisms of American society, ironize, provoke and poeticize, offering their comments on the American life of today.
Place of event: Trade Centre TsUM

Iara Boubnova
History in the present tense
General opinion, it seems, has awarded Eastern Europe with the status of eternal imitation. The works of the artists of the given section represent an attempt and the possibility of tracking down the non-dominant cultural history of Europe. At the same time the layout in the form of footnotes and the status of ‘neither defeaters nor defeated’ opens up for these artists a path to generalizations, to the new creation of myths, of urban visual archeology of the culture’s strata and to experiments in the area of self-identification.
Place of event: Tower of the Federation.

Nicolas Bourriaud
STOCK ZERO OR THE ICY WATER OF EGOTISTICAL CALCULATION
I am interested in capital, this problematic part of a free market. In the project artists will be completing logos, trademarks, commodities and signs, artists will be describing the processes of capitalist economics, and also artists will be examining its boundaries. Place of event: the Tower of the Federation.

Rosa Martinez, Fulya Edemci
After everything
The collapse of the USSR, whose existence revolved around the idea of the Great Utopia, marks the end of History. However this end also marks a new revelation since western history, developing forward, denied ‘today’, clutching it between a reconstructed past and a predetermined Future. In a world in which only micro utopias and personal revolutions seem possible, it is just a modest attempt to once again return to the discussion of the question of how to move forwards.

In the framework of the program ‘Special guests of the biennale’ the works of worldwide famous artists will be shown- Darren Almond, Komar and Melamid, Luca Pancrazzi, Pipilotti Rist, Jeff Wall, Vali Export.
The program of special projects of the Second Moscow biennale is setting itself the task of acquainting viewers with contemporary art , both Russian and international. Inits framework there will be shown the retrospective of Pierre and Gilles, the films of Matthew Barney and also the projects ‘I Believe’, ‘Movement, evolution, art’, ‘Sots-art. Political art in Russia and China’, ‘Disputes about Realism’, Art Digital 2006 and others.

The press conference of The Second Moscow Biennale will take place on the 20th February 2007 at 12.00 in the Federal agency of culture and cinematography.

The press centre of the Second Moscow Biennale will work from the 26th February until 7th March in the trade centre TsUM at the following address: Petrovka ul., 2

The Second Moscow Biennale of contemporary art will take place