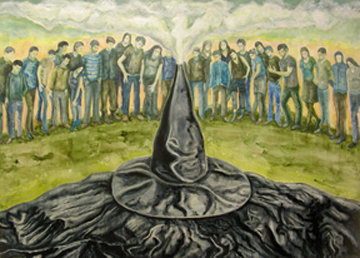 Max Maslansky's paintings and works on paper explore the sentiments of Middle America through its foibles and hidden existential dramas. Honoré Daumier's caricatures of government officials and minor bourgeoisie find sympathy in Maslansky's own depictions of sleeping kings and striving artists, scheming court jesters and top-hated businessmen. In addition to these stock symbols of power and the lack thereof, Maslansky depicts such uniquely American figures as the football-player, the superhero and the game show host--male figures who, when depicted by Maslansky, seem to have little idea what to do with their fame and stardom, even in the midst of it.

Maslansky humanizes his depictions with a rich painterly technique that takes advantage of drips, splatters, scumbles and other happy accidents. His works glow with the light touch of an artist who enjoys the process of making the image as much as the end result. In a painting like, Geyser, for example, chance driven process informs an image of a vacant-faced crowd gathered around a witch's hat spewing what appears to be the last remnants of a failed necromancer.

Max Maslansky received his MFA from the California Institute of the Arts and post-baccalaureate from the Glasgow School of Art. His work has recently been included in Impression (Ism) at the City of Brea Gallery (Brea, CA); Frontier at Roberts and Tilton Gallery (Los Angeles, CA) and Sweet Substitute at Virginia Commonwealth University (Richmond, VA).