Supports/Surfaces is Alive and Well. The works also points directly to the terms of painting and the fact of its own making. - Complaints III. Matt Connors' new project takes on the space as an architectural and sculptural reality defined by area and shape, form and presence. 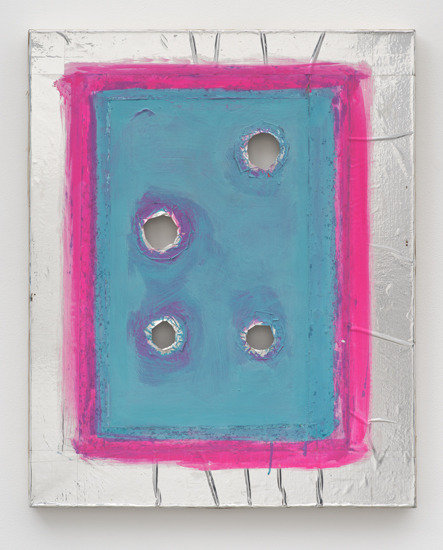 Cherry and Martin is pleased to present works by Jennifer Boysen and Noam Rappaport in context with pieces from the radical French painting movement Supports/Surfaces. In addition to artists like Louis Cane, Daniel Dezeuze, Noël Dolla, and Claude Viallat, all of whom were directly connected to Supports/Surfaces, the show will present important works by intriguing figures like Jean-Marc Meurice and Pierre Buraglio.

Supports/Surfaces developed away from Paris, in the south of France - the home of Matisse. Early exhibtions took place in towns like Coaraze, Montpellier, Nimes and Nice in the mid-1960s. After the student revolts of 1968, the movement ratcheted up its activities, exploding in such exhibtions as "Supports/Surfaces," which took place at ARC in Paris in September 1970. These shows occurred at or around the same time as those of other French artist groups like GRAV and BMPT (Daniel Buren, Olivier Mosset, Michel Parmentier and Niele Toroni). Like them, Supports/Surfaces questioned the role of painting as both an art object and a social one.

As its name suggests, Supports/Surfaces was interested in articulating what its artists felt were all too readily ignored aspects of painting: basic concepts like 'support' and 'surface,' for example, and the presence of painting as a product of individual labor. At the same time, these artists were very much interested in painting and its own peculiar history. Daniel Dezeuze points out that he was looking for a means of “revolting against the art world and the world in general without having to make anti-art.” (Raphael Rubinstein, Polychrome Profusion: Selected Art Criticism: 1990 – 2002.) In fact, those involved with Supports/Surfaces, as Rubinstein also notes, were some of the few French artists of the period to engage directly with American Painting from Abstract Expressionism to Color Field, albeit doing so within the context of their Maoist discourse.

Jennifer Boysen and Noam Rappaport are two young Los Angeles-based artists whose work also points directly to the terms of painting and the fact of its own making. Boysen's work crafts deep and rich painterly atmospheres, at times reminiscent of Olitski, on canvases stretched over found objects. Rappaport explores a range of solutions for investigating line and shape, color and form, including irregularly shaped canvases and physically stacked planes. Both artists have contributed new works to the exhibition.

"Complaints III," Matt Connors' new project at 2732 takes on the space as an architectural and sculptural reality defined by area and shape, form and presence. Powder-coated iron bars of different hues situated in the corners define the lines of the room and bring out a kind of underlying composition. In many respects, "Complaints III" relates to previous projects like "Demonstration (red and blue)" exhibited by Cherry and Martin at Art Unlimited in Basel in 2013; "A Poem is Two Words III," featured in Connors solo show, "Impressionism" at MOMA PS1 in 2012; and "The Defense of Longing for Love Against the Practice of Love" which appeared in Connors 2010 solo exhibition at Cherry and Martin, "Dromedary Resting."

Connors’ work was the subject of “Impressionism,” a solo exhibition at MOMA PS1 in October 2012. Recent solo and two-person museum exhibitions include “Gas... Telephone... One Hundred Thousand Rubles,” Kunsthalle Düsseldorf (Düsseldorf, Germany), and “Concentrations 54: Matt Connors and Fergus Feehily,” Dallas Museum of Art (Dallas, TX). In 2013, Connors was also included in “Outside the Lines: Painting: A Love Story,” Contemporary Arts Museum Houston (Houston, TX) and the international survey, “Painter, Painter,” Walker Art Center (Minneapolis, MN). In 2012, the artist received the John Simon Guggenheim Memorial Foundation Fellowship Grant and the Belgacom Art Prize. Born in 1973, he received his BFA in 1995 from Bennington College (Bennington, VT) and his MFA in 2006 from Yale University School of Art (New Haven, CT). Connors grew up in San Diego; he lives and works in New York.