11am-5pm every day except Tuesdays

The Wandering Veil. Provocative and fearless artist Izhar Patkin discusses his exhibition with writer and curator David Ross. The talk is expected to cover politics and the role of narrative, symbolism, and representation in art today. 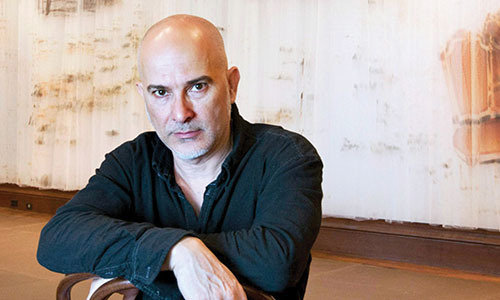 Provocative and fearless artist Izhar Patkin discusses his exhibition, The Wandering Veil, with writer and curator David Ross on Saturday, January 18, at 2pm. The talk is expected to cover politics and the role of narrative, symbolism, and representation in art today.

InThe Wandering Veil, on view in MASS MoCA's largest gallery space, Patkin has created a ghostly virtual city filled with personal narrative, political metaphor, and myth, highlighting many of the formal innovations the artist has pioneered over three decades. The heart of the exhibition is "Veiled Threats," a maze-like series of cinematic, mural-size paintings on tulle fabric inspired by the late Kashmiri-American poet Agha Shahid Ali's writings on memory, loss, love, and exile.

Born in Haifa, Israel, in 1955, Izhar Patkin first gained recognition for his innovative approach in the mid-1980s with "The Black Paintings", a series of white ink paintings on black rubber curtains. Patkin has exhibited extensively, most recently at the Tel Aviv Museum of Art in Israel. His work may be found in the collections of numerous prominent institutions including the Whitney Museum of American Art, Solomon R. Guggenheim Museum, Museum of Modern Art, Los Angeles County Museum of Art, and Museum of Contemporary Art, Los Angeles.

Renowned writer and curator David Ross is a former director of the San Francisco Museum of Modern Art, Whitney Museum of American Art, and Boston's Institute of Contemporary Art. He currently chairs the Art Practice program at the School of Visual Arts in New York City, and serves as an active board member of the Artists Pension Trust and MutualArt.

Opening and talk with the artist Saturday, January 18, at 2pm

Mass MoCa
Marshall Street 87, North Adams
Hours: 11am to 5pm every day except Tuesdays
Admission to the event: free for members and college students and $7 for not-yet-members