The International Guerrilla Video Festival. A mobile festival integrating video art with the urban and social environment. The artworks have site-specific thematic relations to the space where they are shown, engaging and reflecting upon the unique architectural, historical, and interpersonal context. 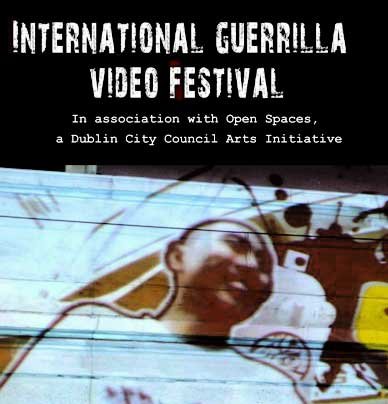 The International Guerrilla Video Festival (IGVFest) is a mobile festival integrating video art with the urban and social environment. The festival removes the technologically complex medium of video out of the institutional situation re-positioning it as open and reflexive in the public domain. The artworks have site-specific thematic relations to the space where they are shown, engaging and reflecting upon the unique architectural, historical, and interpersonal context of each area the festival travels to.

One of the aims of the festival is to create a continuous dialogue from the videos into the community, focusing on lapses in the current framework such as an absence of communication or invisible components of the area. Open to local and international artists, the festival widens the panorama of the discourse to include the perspective of communities elsewhere that have parallel circumstances.

A self-contained, transportable GPU (Guerrilla Projector Unit) facilitates the incursions into the public realm. Transforming public space into a fertile ground for experimentation toward new possibilities in the relationship between art and society.

The IGVFest engages the public on public territory, integrating art with the social environment while liberating video from the confinement of the ‘black box’. The festival collaborates with artists to create work specifically focused on the conditions at each site, approaching each site as a confluence of actors including visible and invisible boundaries, the effect of past and present migrations, physical infrastructure and architecture, and the nodes of exchange present. The site itself becomes an integral part of the presentation as its particular characteristics shape the context of the art while the videos add another layer of identity to the space.

As the same billboards and advertising have become ubiquitous attempting to transform the urban setting into a homogenous landscape in every city around the globe. The festival aims to re-occupy that space infusing it with a reflexive locality showing work created in concert with the community and focusing on issues related to the site. One of the intentions of the festival is to generate discussion between residents of a community fostering new connections between disparate groups and strengthening existing ties. Beginning with the act of viewing the artworks with a neighbor, the common experience provides an opening to start a dialogue and counters the atomizing effects of the urban environment.

The mobile festival utilizes the GPU (Guerrilla Projector Unit) to facilitate the integration of the videos into the visual fabric of the neighborhood. Composed of a multi-channel sound system, digital projector, and a self-contained power source: the GPU is a completely autonomous cinema-on-wheels. The design enables ‘rapid incursions’ into the public arena showing a number of different works at different locations throughout an evening. This fluidity allows the festival to mimic the rapid pace of urban life, defined by a constant state of motion. The hit and run tactics also intentionaly add a pronounced vibrancy and spontaneity to the urban visual atmosphere.

In each city, an array of artists active in the local area are invited to collaborate with the festival as are a selection of international artists, there is also an open call to further diversify the participants. Artists are encouraged to create new work related to the conditions at the site where the work will be projected.