TINA B is an acronym for This Is Not Another Biennial. This Festival offers a week of special events and performances with numerous discussions, lectures, events in the public space, exhibition openings, and other events. The festival is preparing seven curatorial projects right in the pulsating historical centre of Prague in extraordinary venues. This year's main theme puts an even greater focus on the new media, digital technology, video, and installations, and it is offering numerous performances. 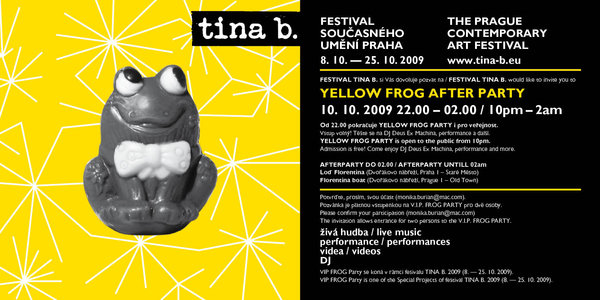 For a period of three weeks (8 – 25 October) in October, Prague will become the mecca of contemporary art again.
The TINA B. Contemporary Art Festival is being held for its fourth year, this time wrapped in yellow. The key theme of this year’s TINA B. Festival is defined by the phrase ‘New Era’. The organisers are thus shifting attention towards the new outlooks of contemporary art. This curatorial concept is underscored by the TINA B. Festival’s resolve to explore the relationship and links between new, experimental forms of artistic expression and wider cultural and social aspects and contexts.

Where is contemporary art headed? What thematic contexts are intrinsic to it? And what are its newest forms, shapes and colours?
TINA B. is trying to present the widest possible look inside the progressive world of visual art today, where an idea born a minute ago is already passé. We bring the work of fifty artists from every corner of the planet to Prague. Therefore the festival is a unique opportunity – not just for artists and lovers of art, but across the art spectrum – to meet and learn and to exchange opinions and experiences.

TINA B. is an acronym for ‘This Is Not Another Biennial’. However, the name also evokes the idea of a sensual figure – the festival’s female patron and mysterious guide, who will hopefully entice thousands of visitors to the festival again. Like every year, this year we have again prepared an off-programme for the festival – a week of special events and performances that will take place between 8 and 12 October. The programme will be filled with numerous discussions, lectures, events in the public space, exhibition openings, and other events.

The festival is preparing seven curatorial projects right in the pulsating historical centre of Prague in extraordinary venues. This year’s main theme puts an even greater focus on the new media, digital technology, video, and installations, and it is offering numerous performances.

THE THRESHOLD OF THE NOOSPHERE/ curator: Blanca de la Torre (ESP)/ This project concentrates on the current state of our society, which has reached a critical point. But this crisis is paradoxically leading to a return to the principles of spirituality. As Eric Davis says, ‘We call on the beast to show itself’.

BEYOND GUILT/ curator: Doron Rabina (UAE)/ In the ‘BEYOND GUILT’ exhibition the Israeli curator Doron Rabina presents mainly video-art works. It focuses thematically and conceptually on guilt as its motif. Guilt is perceived here not just as the source of reflection on moral responsibility but also a source of ideas and as a generator of life.

STREAMING MUSEUM / curator: Nina Colosi (US)/ This year the TINA B. Festival has established cooperation with the Streaming Museum organisation (Electrotechnical Museum), which was formed 29 January 2009 in New York. Streaming Museum is now creating a worldwide network of cultural metropolises to which it broadcasts works of art and exhibitions in real time through the Internet.

PERFORMANCE ART OF THE 1980s – A COMPARISON/ curator: Paulina Kolczynská (PL)/ This exhibition brings together a very specific group of works by three artists who, in their native countries, carried out series of art performances in the years between 1976 and 1983.  An introduction to a comparative study of the performance practices of Jiří Kovanda (CZ), Hassan Sharif (UAE) and Zbigniew Libera (PL) from the 1970’s and 1980’s.

PERFORMANCE ART STUDIES/curator: Johannes Deimling (DE)/ The artist BBB Johannes Deimling will hold a special performance arts workshop, which he is presenting at a number of cities all over the world. The results of the workshop will then be presented on 9 October in an evening of performances.

TINA B. MEETS MINI ROOF ART/ curator: TINA B./
AT the pedestrian zone of Ovocný trh. This year TINA B. has prepared a special art project called TINA B. MEETS MINI ROOF ART. Seven artists were asked to create their own artistic interpretation of roofs for a MINI car. A portion of the proceeds from the auction of these art works will go to the European Art Centre for Disabled Children Sněženka.

TINA B. ON THE ROAD/ curator: TINA B./ Travelling abroad to explore art in other countries and art markets, the organisers and curators of the TINA B. Festival encounter many different artistic figures. They try to bring those whose work stands out as particularly remarkable to the Prague art world to show their work as part of the festival section TINA B. ON THE ROAD