Performance Art of the 80's Comparison

This exhibition brings together a specific group of works by 3 artists who, in their native countries, carried out series of art performances in the years between 1976 and 1983. Independently from each other, Jiri Kovanda, Hassan Sharif and Zbigniew Libera experimented, explored and ultimately widened the scope of performance art through their neo-avant-garde strategies. The main framework and main aim of this presentation is to acknowledge the contribution of these artists to the progress of the artistic development of the contemporary thought. 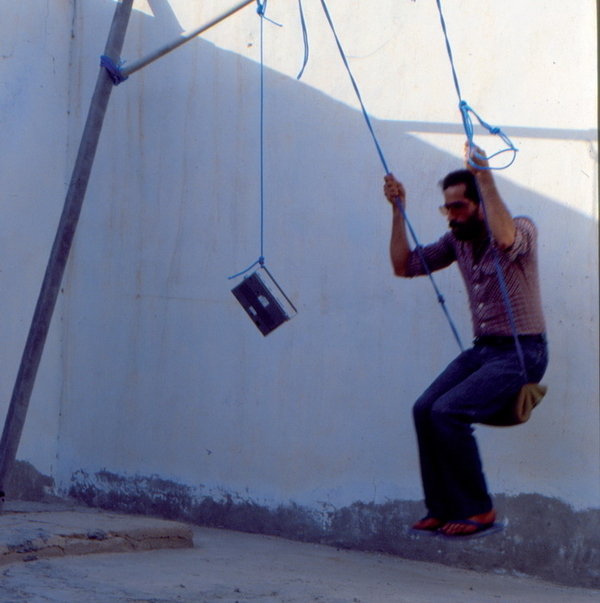 A Tale from the World of Parallel Thinking! Introduction to Comparative Study of the Performance Practices of Jiri Kovanda, Hassan Sharif and Zbigniew Libera from the 1970’s and 1980’!

This exhibition brings together a very specific group of works by three artists who, in their native countries, carried out series of art performances in the years between 1976 and 1983.  Independently from each other, Jiri Kovanda (in Prague, between 1976-1978), Hassan Sharif (in Dubai, between 1982-1983) and Zbigniew Libera (in Warsaw, between 1981- 82) experimented, explored and ultimately widened the scope of performance art through their neo-avant-garde strategies. This period brought a number of significant innovations to performance art practices and this exhibition seeks to identify and examine them. The main framework and main aim of this presentation is to acknowledge the contribution of these artists to the progress of the artistic development of the contemporary thought.

This exhibition is the very first comprehensive overview, outside of the UAE, of the series of performances executed by Hassan Sharif in Dubai in 1983. It consists of photographic and drawing documentation of over twelve performances, which are the sole examples of performance art in this region in the 1980s. This overview aims to identify, classify and contextualise this material and to discuss the theoretical background of Sharif’s performance art. The exhibition examines the unique link between the ‘Semi-System’ mathematical drawings created by the artist according to the ‘chance and order’ British constructivist theory and his performance art. Thus, it traces a constructivist framework outside of the media of painting and sculpture and explores the rare union of constructivist and experimental theory with Middle Eastern spirituality and sensibility.

The detailed documentation also captures the important historical moment in which the desert of Hatta became the setting for performance art. It captures the moment in the performance as this medium that acquires the new element of the desert landscape as part of its backdrop. In a number of his performances, Hassan Sharif not only acquires familiar elements of the everyday life for the purpose of his performance but also reconfigures them by giving them new attributes. The sequence of performances shown in the exhibition can be categorized as minimalist and, to some degree, ‘action’ based performances.

This exhibition also seeks to compare the unique character of practice and circumstance within Sharif’s performances with Polish and Czech performance art during the same period of time. The performance practice of Zbigniew Libera, a renowned Polish conceptualist, specifically serves as a wide platform for comparative discussions about production and documentation, as well as the dynamic role of the viewer, seen in his 1981–1982 work ‘Domestic Performance’. The subtle style of the minimalist performance art by Jiri Kovanda, an important representative of Czech ‘actionism’ of the late 1970s, is discussed in depth as part of the comparative aspects of the practice and performance strategy.

The exhibition prompts a unique and timely dialogue between the three artists, revealing nuances in their approaches to performance art, their individual points of interest and the influence of their geo-political contexts. Most importantly, this exhibition allows us to see striking parallels in their artistic practices, aspects of which open up a new perspective on the historical development of performance art. By establishing these links, this exhibition pays tribute to their artistic commitment and to the ongoing creation of contemporary thought.

Jiří Kovanda began staging his performances in the 1970s during a time of political strife in Czechoslovakia. He faced a twofold challenge. He was forced to face a wider audience that was largely unprepared for such avant-garde work while also seeking a way ‘to be able to operate within the parameters that existed’ at that time.

Although the 1970s saw the rise of the dissident movement, the country continued to suffer from the absence of liberal democracy. During these complex times, Kovanda devised his minimalist actioninterventions, guided by a simple, humanistic, desire to ‘seek out normal interpersonal relationships, normal ways of dealing with people’, and to ‘transform (himself)’. What followed as a result of this outline can be described as a series of subtle ‘actions’, which were often executed in busy places without the conscious engagement of the viewer.
His audience was usually unaware of the performance occurring before their eyes. The 1977 performance ‘Escalator’ typifies this kind of subtle approach. During this performance, the artist turned back while riding an escalator, attempting to gaze into the
eyes of the person standing behind him.

The best known of his performances was executed in the Wenceslas Square in Prague in 1976. Here, Kovanda acted a series of gestures without meaningful content. The significance of all these acts is profound. By being surrounded by crowds, the artist found himself paradoxically without an audience. The performances resonated with similarities to Fluxus. It dissipated in a matter of moments but remained ‘unread’ by those witnessing them. man level. Kovanda usually chose highly public places for his performances even though it was illegal to stage independent productions of any size at that time. It is admirable that he succeeded
in carrying out his purely artistic and humanistic deeds despite these political limitations.

The strategy of staging performances without an audience reached new depths in a series carried out in 1982 – 1983 by Hassan Sharif in Hatta, a desert area near Dubai. These works were the very first examples of performance art in the Gulf region.
Towards the end of his studies at the Byam Shaw School of Art in London in 1983 – 1984, the artist experimented relentlessly and, with the great enthusiasm of a contemporary thinker and educator, aimed to introduce this exciting medium to the wider society of his native country. However, the restrictions were too great and his attempts were unsupported and misunderstood at the time.
Despite this, he remained the most active representative of contemporary art in the region. True to himself and to his artistic interests, he continued to experiment with his art.

In 1983, he staged a series of important performances, which reveal two different art philosophical influences. Documented by assistants and close friends, his work can be divided into two coherent groups.
The first, which includes such performances as ‘Body and Squares’ (1983), ‘Body in the Shop’ 1983), and ‘Store No. III’ (1983), uniquely links to Sharif’s own ‘Semi-System’ to mathematical drawings created according to the ‘chance and order’ British constructivist theory. It reveals the constructivist framework utilised in performance art.
Here, each stage of the performance becomes the result of mathematical calculations. Although this phenomenon can be described as ‘in keeping’ with the Fluxus fusion of the avantgarde movements, the constructivist influence appears to be stronger.

The second group of performances bears distinctive similarities with Fluxus in flavouring artist-centred creative practices characterised by a ‘do it yourself’ aesthetic and preference for simplicity over complexity.
In fact, just like Kovanda, Sharif picks everyday, meaningless actions as the vehicle of his art. ‘When I have nothing to do, I walk.’ This is the commentary Sharif used for his performance ‘Walking’ (1983), in which a series of photographs depicted him in a straightforward stroll in the desert. At this historic moment, the desert became a stage for his performance art.
In a number of his performances, such as ‘Swing’ (1983) and ‘Throwing Stones’ (1983), Sharif not only utilised familiar elements of the everyday life, but, significantly, also managed to reconfigure them by giving them new attributes. Ultimately, the centre of the action, deprived of an audience, became the artist himself with the desert as his backdrop.
As Sharif put it, the desert is his home and therefore, unsurprisingly, it became a natural environment to carry out his series of performances.

As for Zbigniew Libera, the only possible environment to stage any kind of action or performance during Martial Law in Poland (1981–1982) was his home. In his case, it was an apartment in the building block where he lived with his mother.
It is important to note that public spaces as we understand them were non-existent in Poland at that time and all cultural institutions, including theatres and cinemas, were officially closed by the state.

What took place during these years can be described as the creation of the ‘Private-art’, centred on the domestic environment. ‘Privateart’ functioned alongside ‘chip-in culture’, where the audience was limited to the independent artistic community. These neo-avant-garde strategies aimed to protect the artists’ right to experiment and to carry out actions necessary to explore the creative ‘unknown’. This is the ‘Private-art’ that inspired Libera’s series of photographs from this period. The artist, in a very striking way, used these performances to examine the relationship between himself and his mother and grandmother.

The role of the domestic environment had an even farther-reaching influence. It is the intimacy of the domestic sphere that prompted the dynamic between the artist and the audience to completely change in performance art. This process is specifically visible in the ‘Domestic Performance’ (1981 – 1981) carried out by Libera with the assistance of his mother, who is seen holding a camera in one photograph. She was his assistant during the performance and was the person who documented the preparation and planning process along with the final outcome.
Libera knew from the start that only he and his assistant would experience the performance. Interestingly, he later observed that his assistant became emotionally involved in what was happening, which swayed the documentation process. The documentation reveals equal attention to the artist (and his performance) and to the detailed elements of the setting, as though preparing viewers for the surprising appearance of a ‘supporting actor’ – the assistant – who played the role of the missing audience… Or is it the other way round?

The force of creativity allowed artists to overcome external social and political restrictions. Just like Kovanda and Sharif, Libera in a clever way adapted to political and social realities he was powerless to change. Adaptation is not analogous to confinement; each artist remained true to his pursuits and despite all odds managed to open new doors to vibrant and original ideas.
Paulina Kolczynska