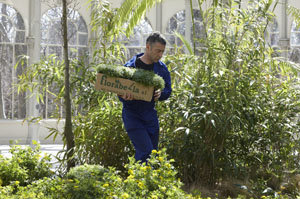 The Palacio de Cristal was inaugurated in 1887 with an exhibition of the flora of the Philippines, Spain's pre-eminent colony at that time. Palm trees and indigenous plants of many kinds were installed in a ceremonial layout that centred on two chairs raised on a dais, flanked by tapestries and accessed across a spread of oriental carpets. Transforming the greenhouse into an exotic mise-en-scene, this installation formed part of a larger project devoted to the Philippines, its natural resources and material culture. (Another pavilion in the Buen Retiro Park was devoted to the display of manufacturing products, the fine arts and craft practices. In addition, outdoor exhibits included native buildings, fishing and other kinds of boats.)

In its built form the Palacio de Cristal belongs to the typology of the green house; in its role and functions, however, it can be more closely aligned with Joseph Paxton's Crystal Palace built in 1852 for one of the first world's fairs. The kinds of exhibits presented in London at that epochal event – manufacturing and industrial goods, art and artefacts – became the staple of the Universal Exhibitions that were to prove such a popular feature of later 19th and early 20th century western culture.

Conceived specifically for this location (now dedicated to art projects commissioned by the Museo Reina Sofia), Pierre Huyghe's La saison des fêtes, is loosely framed by the site's history and former functions. Whereas the impulses behind the original displays of luxuriant tropical plants were informed by a colonialist ideology Huyghe's work, by contrast, attempts to stand outside a strictly Eurocentric position. The visionary landscape which occupies the center of the luminous pavilion has a circular footprint, perhaps in reference to the Earth's spherical profile, perhaps an allusion to a time piece - like a clock face - marking the cyclical flow of days, months and seasons. The plants that comprise this landscape are those associated with festivals and celebrations familiar across the world – red roses for Valentine's day, pumpkins for Halloween, cherry blossom marking the arrival of spring. Huyghe hopes that in this utopian cosmos they might all come into flower at the same moment (sometime during the course of the exhibition); as they amalgamate disparate dates strewn intermittently across the annual calendar into one composite festival – "a bouquet of anniversaries" – people from all parts of the world might gather together to make common cause. The shift from the pair of grand chairs that graced the dais in this building when it first opened in 1887, to the commonplace plastic chairs Huyghe has provided for viewers who wish to contemplate the scene collectively, to survey their fellow visitors and this fantastical terrain alike, evidences a radically different ethos: it invites spectators to become complicit and self-reflective. The sense of plenitude and pleasure that Huyghe's garden generates may provoke spectators into making common cause as they share in this wondrous yet strangely disturbing experience. The undercurrent of something grotesque within this idyllic garden may, in addition, prompt reflection on the ways that commemorations have become inextricably linked with souvenirs – not only with memories but with objects, both natural and man-made. Economic forces increasingly infiltrate cultural customs, enhancing them artificially and inflating their commercial value. It becomes more and more difficult to extract oneself given that from the subtle forms of social conformity that reinforce such economic pressures, and to refrain from participating in the relentless series of festive dates which now shapes and defines the yearly calendar.

Huyghe is interested in producing what he terms "connective images", by which he means, critic Olivier Zahm argues, images that do not attempt to represent the world but to place us at once within and outside the processes by which we visualize and construct our realities. In their local and popular guises festivals and celebrations, which relate to key moments both in the human life story and in natural cycles – including courtship, birth, death and mourning, regeneration and decay - become formative events that impact individual and collective memory. As their traces solidify in our memories they serve to shape our identities. Various types of celebration have previously appeared in Huyghe's oeuvre, including Streamside Day Follies, 2003, a founders' parade in Fishkill, New York, that marked the inauguration a new community from a stereotypical housing tract. Yet, often, celebrations assume new hybrid forms as communities get transplanted: in the process of migration old customs are melded with new social circumstances and cultural habits. Such morphing of traditional forms is symbolized in the Green Romantica, a rose of an exceptional color, that Huyghe planted in the courtyard of the Reina Sofia Museum just prior to the opening of his exhibition at the Palacio de Cristal on March 17th 2010. In the wake of Saint Valentine's day (February 14th) and on the cusp of Saint Patrick's Day (March 17th) this as yet "unmarked" moment is given expression in a flower that combines features from both those festive occasions, at the same time as it evokes awareness of the malleability of such customs. (A typical example is the manipulation of Saint Patrick's Day, which has been associated with green ribbons and shamrocks since the seventeenth century by the Irish government in the 1990s, when it became the focus of a campaign to use its festivities as a vehicle for showcasing Ireland and its culture.) Huyghe hopes that a custom may be established based on the annual blooming of this rose bush. Emblematic of the legacy of his project, its flowering will fuse reality and fiction, history and memory.

In this action are conflated two notions captured in the word "premises" (at least in the English language): first, it refers to site (to the place where the event takes place) and, second, to the argument in which this action is grounded. Condensing the conceptual and the physical, the planting of the rose in the museum's courtyard embodies Huyghe's search for ways of engaging critically with ubiquitous social forms and codes that have become double-edged. Within the ever-growing drive to establish more popular customs and annual traditions are insidious modes of instilling conformism and hence of re-inscribing alienation. So deeply inscribed within today's vernacular culture is the increasingly prescriptive sequence of dates that charts festivities, anniversaries and related celebrations that it is hard to recognize how deterministic is its collective impact. "Don't save the date" might be the paradoxical message inscribed in Huyghe's richly layered project.