In and Out of Context: Redux 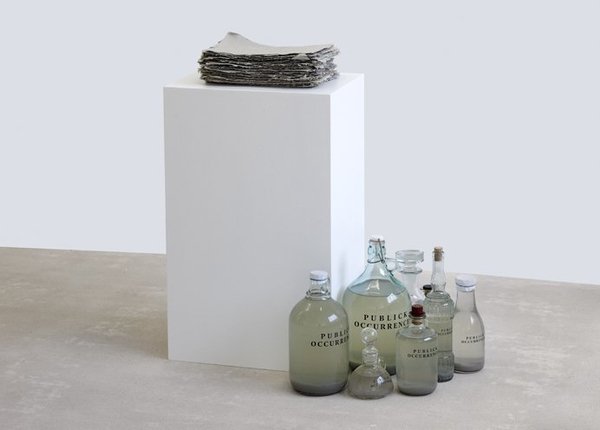 For "In and Out of Context: Redux," artists Ayreen Anastas, Julieta Aranda, and Rene Gabri present an evolving series of works, publications, events, and discussions to explore the museum as a site of exchange and catalyst for experimentation. Through individual and collective works, Anastas, Gabri, and and Programs for Research and Outreach (PRO)'s Project for a Revolution in New York, or How to arrest a Hurricane explores art's potential place in economic, national, and urban struggles by activating a pool of collaborators to develop a series of works, events, occurrences, and interventions within the museum and in the city. Julieta Aranda's project, All the memory of the world (We can remember it for you), consists of several newly commissioned sculptures, a wall installation that will develop over a three-month period, a publication, a screening, and discussions that expose "declarative memory," a kind of representation of the past that requires articulation. For her, such articulations are part of a process in which we seek to track the truth and our witnessing of it—a type of memory that is contested but for which we become accountable.

Inspired by Alain Resnais's 1956 film, Toute la mémoire du monde, the project includes a screening of Resnais's film on June 10. Over the course of the exhibition, Aranda's project evolves as layers on one wall of the Museum as Hub space, and will be accompanied by a newspaper publication. Each of these elements will address a particular aspect of memory to investigate its implications and responsibilities in the production of present reality.

Ayreen Anastas, Rene Gabri, Programs for Research and Outreach, and additional participants (forthcoming)
Project for a Revolution in New York, or How to arrest a Hurricane

Project for a Revolution in New York, or How to arrest a Hurricane asks, "If 1989 marked the great victory of so-called free-market-capitalism over the state-capitalism of the Soviet Union, what exactly does 2009 mark? Can one live through revolutionary times without a revolution?" Departing from a suspicion that history has not ended, they acknowledge that though the recent financial collapse will not be the last, it does mark a point of no return. For them, increasingly contracted periods between cycles of boom/bust and a growing awareness that government's most important role today is to serve the interests of capital, makes it difficult to imagine that current political arrangements can continue without increasing conflicts.

For their Museum as Hub commission, Ayreen Anastas and Rene Gabri, in collaboration with Programs for Research and Outreach (PRO), propose a project that takes up art's potential place within these struggles and emerging conflicts. Looking back at deriving inspiration from earlier moments and movements, they attempt to assemble one possible diagram for a desiring or revolutionary machine. The project consists of a concatenation of events, seminars, gestures, and utterances attempting to address and break out of a perceived contemporary malaise, a collective (and thus political) depression accompanied by a palpable catatonia. Given its ambitions, the project involves a pool of artists, agitators, thinkers, and former or aspiring revolutionaries.

Taking the form of overlapping programs—Programs for Analysis; Programs for Praxis; and Programs for Poïesis—the ambition of the project is to share a process with a public and create some possibility for involvement.

Aryeen Anastas
Ayreen Anastas is often not exactly herself and thus feels fields of attraction pulling her to and away from that same self. She is not very good at getting to the heart of things nor does she trust words to do so for her. She often wonders, what is the meaning of a biography without a life. Her method is repetition without boredom. She slightly suffers from the English language, yet she intensely loves you and has little or no worries in letting you know. To write by fragments: the fragments are then so many little stones on the perimeter of an unrecognizable geometric figure: she spreads herself around: her whole little universe in crumbs; at the center, what?

Julieta Aranda
Julieta Aranda was born in Mexico City and currently lives between New York and Berlin. Her multidimensional practice deals with a range of themes including circulation mechanisms and the idea of a “poetics of circulation”; the politicized subject or the possibility of a politicized subjectivity; the perception and use of time; and one’s power over the imaginary. Projects take the form of printed media, installation, video, and community organizing. As co-director of e-Flux with Anton Vidokle, she developed the projects Pawnshop (currently in Beijing), and e-flux video rental, which started in the e-Flux storefront in New York in 2004, and has traveled to more than fifteen venues worldwide. Her work has been exhibited internationally in venues such as the Solomon R. Guggenheim Museum (2009), where she was the first artist to do a solo presentation for the “Intervals” exhibition series; Kunstverein Arnsberg (2010), MOCA Miami (2009), Witte de With (2010), Museum of Contemporary Art in Chicago (2007), 2nd Moscow Biennial (2007), MUSAC Spain (2006), and VII Havana Biennial (2000), among others.

Rene Gabri
A philologist might speculate that this name means or signals the rebirth of non-believing. A historian would look to Tehran, where this name was assembled, attempting to find out how a French name René could attach itself to the name of a Zoroastrian tribe. An anthropologist would object to the very designation of Gabri as non-believer, arguing that not believing in Allah or God does not necessarily mean not believing in anything. An ethnographer would patch together a chronicle of the unforeseeable rituals, events, and passions which would assign this Parska-hay child, this name. A schizoanalyst would reject all of these attempts to delimit this life under the circumscription and signification of this name. Instead, she would emphasize the collective which took up this name: a multiplicity of lines. First she would identify the abstract and segmentarized lines which proceeded at various points to cross over the body assigned this name. The earthquakes, revolutions, genocides, wars, emigrations, racisms, explosions, implosions, collisions, events, which, from time to time, shifted the named’s center of gravity and presented a matrix of forces. At the same instant, she would trace all the flight paths, the becomings, the attempts to collectively assemble a plane of consistency, to confound and deterritorialize perceived limits, including those of any biography. An artist would attempt to find a precise gesture or act befitting each specific time and place this name would be called.

As a project that thrives on its own evolution, "In and Out of Context: REDUX" invites repeated visits by the public. Details of scheduled events, discussions, and opportunities for participation are outlined below and at http://www.newmuseum.org/events.

Thursday, April 15 | Part I: 4 p.m.–6:30 p.m. | Part II: 7 p.m.–9 p.m.
Potentials for Collective Research and Action: Activism, Analysis and Aesthetics at a Crossroads
Organized by Programs for Research and Outreach (PRO) in association with Ayreen Anastas and Rene Gabri, this event will shift between elements of a seminar, screening, lecture, and discussion.
FREE, limited seating available

Thursday, May 14, 7 p.m.
After all these introductions I wish to say something
This cinema event by Ayreen Anastas and Rene Gabri is an open-ended "film" emerging out of various lines of inquiry and influences ranging from Situationist experiments, concepts of cinema verité, and performance art of the 1960s and '70s. The screening will be the first and last time this work is shown.
FREE, limited seating available

Thursday, June 10, 7 p.m.
Toute la mémoire du monde / All the memory of the world screening and discussion with Julieta Aranda and guests
This 1956 film by Alain Resnais is a portrait of the Bibliotheque Nationale in Paris. Artist Julieta Aranda and invited guests will lead a discussion following the film.
FREE, limited seating available