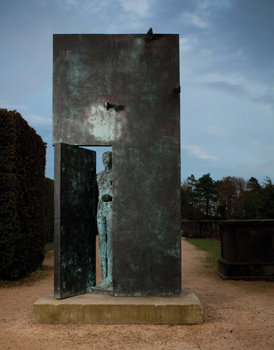 This spring, YSP presents four new projects in the landscape, in addition to the ongoing display of more than 70 sculptures in the open air, artists' projects, site-specific commissions and major indoor exhibitions. The current artistic programme includes 11 monumental bronzes by Henry Moore, sited according to the artist's wishes, and the Deer Shelter Skyspace, an Art Fund Commission by James Turrell.

New projects in the landscape

Rebecca Chesney
Artist Rebecca Chesney begins a year-long residency at YSP, researching the bees and plants of the Bretton Estate at YSP to develop new work. With the help of experts and visitors, Chesney's residency also draws attention to the plight of bees. The artist's previous projects, which look at changing environments and human activity, have resulted in exhibitions of drawings, photographs, installations and films.

Alec Finlay
YSP is one of the sites for Alec Finlay's Home to a king (3), the artist's UK-wide project. The work is a continuation of Finlay's poetic response to the 500 acre Bretton Estate and comprises a series of 10 nest-boxes each featuring crossword clues that can be solved as part of the walk through the parkland.

Dennis Oppenheim
Trees: From Alternative Landscape Components (2006) is a flamboyant sculpture installation by US artist Dennis Oppenheim, and is the first time that the work has been shown in the UK. First made for Central Park, New York, it is a highly artificial landscape formed of trees with branches laden with a range of curious domestic artefacts. This important long-term loan is courtesy of the artist and Galerie Scheffel, Bad Homburg, Germany.

Henry Moore in the Country Park
YSP showcases the largest display of open-air bronzes by the artist in Europe. Featuring key loans from The Henry Moore Foundation, Tate and other collections, the sculptures, created between 1955 and 1985, represent the peak of the artist's career when he worked on a monumental scale and particularly for the open air.

James Turrell
YSP is home to one of the few James Turrell Skyspaces open to the public in the world. The Skyspace at YSP is set within the Park's 18th-century Grade II Listed building - the deer shelter. His work does not alter the shape of the landscape or disturb the tranquillity of the site, but creates a place of contemplation and revelation, harnessing the changing light of the Yorkshire sky.