Often regarded as a continent defined by underdevelopment, poverty, war and tourism, through ''Urban Africa'' David Adjaye presents his continent in a different light. ''Sustainable Futures'' explores a range of products, concepts and projects that address issues of sustainability in their design. 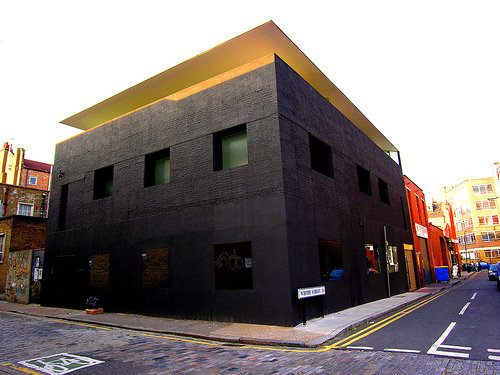 One of the leading architects of his generation, David Adjaye has stepped out of his regular line of work to photograph and document key cities in Africa as part of an ongoing project to study new patterns of urbanism. This collection of photographs is a personal quest through the eyes of an architect to address the scant knowledge of the built environment of the African continent. David Adjaye has photographed the salient features of Africa’s cities including suburban settlements, unofficial developments and townscapes. Brought together for the first time, these photographs reveal the cities themselves and examine the buildings and places which have a special resonance with Adjaye’s preoccupations as an architect. The photographs will be presented as a series of vivid large-scale projections, set against a backdrop of African beats specially composed for the exhibition by Peter Adjaye. The images and music will flood the gallery creating a rich diversity of architecture, culture and urban landscape.

Often regarded as a continent defined by underdevelopment, poverty, war and tourism, through this exhibition Adjaye presents Africa in a different light. This detailed survey will reveal a unique snapshot of life in Africa today, documenting the nature of urban life in a developing country, a unique geo-cultural survey profiling the African city in a global context. Adjaye has captured the urban development of cities including Kigali, the capital city of Rwanda showing traces of its Colonial past, Tripoli in Libya, very much invaded by the energy of the present, the informal settlements on the edges of new cities like Abuja, Nigeria and the traces of apartheid still inscribed on Pretoria, South Africa.

Born in Dar-Es-Salam, Tanzania, David Adjaye moved to London in 1979. Graduating from the Royal College of Art in 1993 Adjaye trained with David Chipperfield Architects and Eduardo Souto de Moura in Oporto. Winning the RIBA First Prize Bronze Medal in 1993 Adjaye set up his own practice, Adjaye Associates in 2000 and was nominated for a Stirling Prize in 2006 for his Whitechapel Idea Store. With a rich body of built work he has recently won the prestigious commission to design the new National Museum of African American History and Culture in Washington DC which will open in 2015.

This exhibition showcases a range of design and architecture projects that explore the most important issues associated with sustainability. Celebrated through a selection of pioneering and forward thinking design approaches, this exhibition places sustainable design centre stage, focusing on how design can lead the way and make a positive contribution towards a more sustainable future. Curated under five themes: Cities, Energy and Economies, Food, Materiality and the Creative Citizen, this exhibition will explore projects that are either in the market place or in development, including the Masdar Development hailed to be the world’s first carbon neutral city in Abu Dhabi designed by Fosters + Partners. Fashion designer Christopher Raeburn and his Digital Rainbow Collection which reuses Ministry of Defense parachute materials will be displayed alongside projects that have not yet been seen by a wider audience, including the Energy AWARE Clock designed by the Interactive Institute in Stockholm that monitors the energy consumption in a domestic household, Local River by Mathieu Lehanneur, a concept for a domestic ‘refrigerator-aquarium’ that breeds freshwater fish and grows herbs at the same time, and Yves Bèhar’s FUSE project for sportslifestyle brand PUMA which is set to revolutionise their packaging and distribution system."

Visitors will be encouraged to look at their own consumption habits and recognise the individual role they can play in embracing sustainability. The website CanDesignMakeaDifference.com will also enable visitors to engage with sustainable issues and share their opinions on sustainability. Architecture models, products and prototypes will feature alongside material samples, film footage, visuals and interactive displays. The exhibition design, build and graphics will support the use of sustainable and ethically sourced materials where the full lifecycle and minimal impact of materials has been considered. Jochen Zeitz, Chairman and CEO, PUMA AG comments ‘PUMAVision, through our PUMA.Safe program, is honoured to partner with the Design Museum to introduce groundbreaking work in sustainable design. As a business leader in environmental and social initiatives, PUMA’s commitment to sustainability is reflected in the exhibition, ‘Can design make a difference’, which will drive and encourage individuals and corporations to achieve a higher standard of sustainable practice.’

Media View 30 March 10am – 12pm.
David Adjaye will be available for interview