Disruption. The 7th edition invites four up-and-coming designers to take over a gallery in the Design Museum and fill it with their most disruptive ideas. 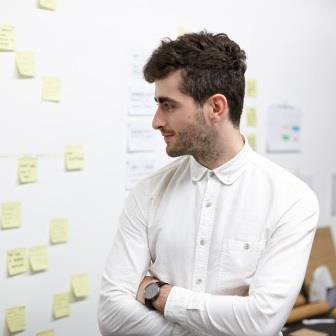 Returning for a seventh year and on a larger scale than ever before, Designers in Residence 2014 invites four up-and-coming designers to take over a gallery in the Design Museum and fill it with their most disruptive ideas.

JAMES CHRISTIAN
The Designers in Residence are James Christian, Ilona Gaynor, Torsten Sherwood and Patrick Stevenson-Keating. Each has responded to the theme of ‘disruption’ with a specially developed project, showcased for the first time at the Design Museum.
Disrupting housing: By re-examining London’s pre-Victorian slums and the chaotic dwellings that once stood on London Bridge, James Christian develops a series of hypothetical housing models for the city of today. The lives of the housing schemes’ imagined inhabitants are depicted in comic book style illustrations, added to throughout the exhibition’s run.

ILONA GAYNOR
Disrupting the law: Repositioning the courtroom as a television studio, Ilona Gaynor draws the visitor into a meticulously directed whodunit. Props, drawings, maps and models point to an unknown geometry of legal theatre, exposing the myriad of eccentricities within the judicial system.
Disrupting play: Torsten Sherwood presents an alternative archetype for the construction toy, moving beyond the familiar building brick and offering new possibilities for den builders of all ages. Simple cardboard discs overlap, bend and join to create edges, surfaces and forms in an almost endless array of combinations.

TORSTEN SHERWOOD
Disrupting finance: Questioning our use of financial technologies, Patrick Stevenson-Keating suggests new metrics by which to measure value. A working cash machine, a new currency and devices for credit card payments explore how economic objects shape society’s broader values. Designers in Residence 2014 is supported by a series of events including sketching tours, talks, and evening socials.

PATRICK STEVENSON-KEATING
The Designers in Residence programme provides young designers with time and space to research and consider new ways of developing their work. During the four months leading up to the exhibition, residents discuss their projects with established practitioners, industry experts and residency alumni, as well as with the Design Museum's legal, commercial, learning, development, and curatorial teams. Each resident is offered a bursary, commissioning budget and the production costs required to realise their new commission. Entry for Designers in Residence 2015 opens in September 2014.

James Christian is an architectural designer and educator. He is co- founder of the architecture and design research collective Projects Office and teaches at Middlesex University. James is fascinated by the relationship between buildings and the people who inhabit them. James's work spans architecture, urbanism, interior design, objects and illustration and he has exhibited in the UK and internationally.

Ilona Gaynor is a designer and filmmaker. She is the founder and Director of London based research studio, The Department of No. Her work draws upon use of image, rhetoric and cinematic tropes to construct complexly precise plots, schemes and narrative texts. Since graduating from The Royal College of Art, Ilona's work has been recognised internationally through awards, exhibitions, books, publications and conferences including D&AD, Resonate, Blueprint, WeMakeMoneyNotArt and Architectural Design Magazine. Upon graduating, Ilona was awarded the Ridley Scott Prize and residency and she is currently faculty in Digital + Media at the Rhode Island School of Design.

Torsten Sherwood is a designer based in London. Central to his understanding of design is a holistic and multidisciplinary approach having experience in both architecture and product design. Particularly interested in how functionalist and vernacular designers use constraints to inform their design process, much of his work is influenced by an understanding of and experimentation with materials, construction and making. Having worked and studied in Bath, Florence and Copenhagen, Torsten completed his Architecture Part 1 at the University of Bath in the summer of 2013.

Patrick Stevenson-Keating is the founder of collaborative design studio Studio PSK. The studio works across multiple platforms, but specialises in ‘object driven speculative design’. The studio’s work explores tensions in society, science and emerging technologies and it has exhibited internationally in spaces including the TATE Modern, V&A Museum, Austin Convention Centre (Texas), Royal Albert Hall, Design For Death Convention Macau and the Mudam Museum amongst others. Patrick is also Module Leader of final year Product Design at Middlesex University, and guest lectures at a number of other European universities.

About Designers in Residence:
The Design Museum continues to support the next generation of designers and creatives with its Designers in Residence programme. This exhibition showcases the work of young designers at the beginning of their careers: recent alumni include Giles Miller, Asif Khan and Bethan Laura Wood. Last year’s Residents were Adam Nathaniel Furman, Eunhee Jo, Chloe Meineck and Thomas Thwaites. The programme includes a series of events andtalks, offering the designers the opportunity to interact and engage with the public, whilst using this platform as a test-bed for ideas, designs and innovations.

About Design Museum:
The Design Museum is the world’s leading museum devoted to architecture and design. The museum opened in 1989 and its work encompasses all elements of design, including fashion, product and graphic design. The museum has hosted exhibitions showcasing some of the most important pioneers of design including Sir Paul Smith, Dame Zaha Hadid, Sir Jonathan Ive and Dieter Rams. The Design Museum plans to relocate from its current home at Shad Thames to the former Commonwealth Institute building in Kensington, West London. The project is expected to be completed by 2016. Leading designer John Pawson will convert the interior of the Commonwealth Institute building to create a new home for the Design Museum, giving it three times more space in which to show a wider range of exhibitions, showcase its world class collection and extend its learning programme.