Zigzag. Her photography exemplified strong compositional motifs, and the repetitive, regular shape of the zigzag, with its strong lines and angles, was a form she used in images of disparate subjects. 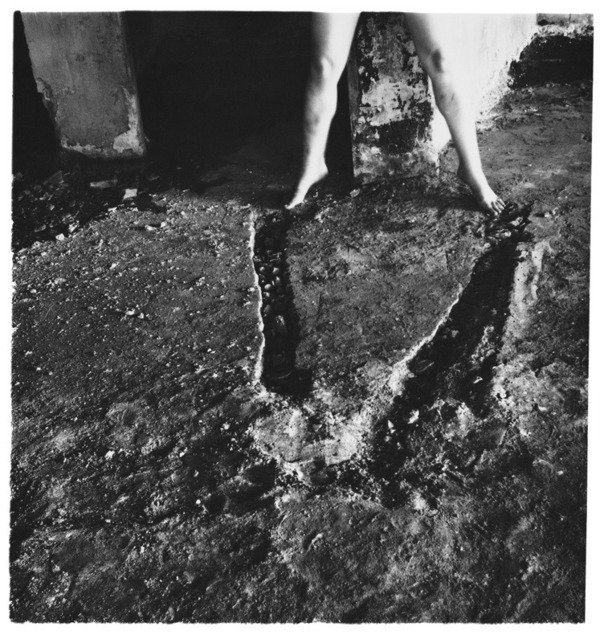 Victoria Miro Mayfair is delighted to present the first solo exhibition of Francesca Woodman’s work at the Mayfair gallery. In her short career Woodman produced an extraordinary body of work – over 800 photographs – acclaimed for its singularity of style and range of innovative techniques.

This exhibition considers the zigzag and other abstract geometrical forms as recurring visual themes in Woodman’s work. Woodman’s practice is often discussed in terms of its surreal and symbolic imagery, but her work was grounded in a sophisticated understanding of form. Her photography exemplified strong compositional motifs, and the repetitive, regular shape of the zigzag, with its strong lines and angles, was a form she used in images of disparate subjects.

Many of Woodman’s gelatin silver prints feature this strong, idiosyncratic abstract lineage, and she also extended her investigation of the serial geometrical form in her large-scale diazotype prints. The artist described one of these works in a letter to a friend in 1980: ‘It will be ... a long string of images held together by a long compositional zigzag, thus the corner of a building in one frame fits into the elbow of a girl in the next frame into a book in the third frame, the images are both very personal mysterious ones and harsh images of outdoor city life. It is had to get the adjoining images to fit the rigorous structural scaffold’.

As George Woodman, the artist’s father, has pointed out, ‘Modernist abstract art devotes itself to the form of the square, the rectangle, the box, the intersection of streets, the whole right angle world of horizontal and vertical. Domination by a zig-zag motif is very rare... It creates a world of flux without horizon, a rhythmic oscillation. Francesca made studies of zig-zags: from representations of houses, noses, hands and baby’s legs. A related investigation was the series Bridges and Tiaras. In these prints, the bridge, arching over the river, and the tiara, arching over the woman’s head, are contrasted and linked by the logic of analogy. Francesca creates visual puns, jokes and poetry in this series’.

Victoria Miro Mayfair
14 St George Street - London W1S 1FE
Tuesday - Saturday 10.00am - 6.00pm
Please note we are closed on Sunday.
On Mondays we are only open by appointment.