Three walls is a collaborative project of the women artists Sabine Funke, Ragna Robertsdottir and Beate Terfloth, which is organised in two different places: Galerie Michael Zink in Munich and i8 galleri in Reykjavik. The idea underlying the Three walls project is to juxtapose the three different styles and artistic approaches of the artists, who nevertheless share a focus on wall works of art. 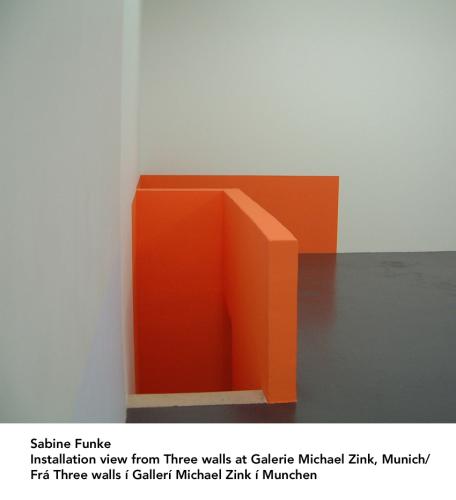 Three walls is a collaborative project of the women artists Sabine Funke, Ragna RÃ³bertsdÃ³ttir and Beate Terfloth, which is organised in two different places: Galerie Michael Zink in Munich and i8 galleri in Reykjavik.

The idea underlying the Three walls project is to juxtapose the three different styles and artistic approaches of the artists, who nevertheless share a focus on wall works of art. In selecting these women artists, consideration was given to their unity with their own cultural worlds where they lived and worked. It is very important for the project, which is based on creating wall works of art that take the architecture of the site into consideration, that the cultural areas from which the works spring are completely different and, above all, that the cultural influence is clearly perceptible in the works.

It is our intention with this exhibition - after which the walls will be returned to their original state - to encourage exchanges of views by creating tension between spatial proximity and conceptual distance, which we believe will enrich artistic and cultural inspiration.

Ragna RÃ³bertsdÃ³ttir was born in Iceland and is under strong influence from her country's landscape. The artistic community in Iceland is young in years, and Icelandic artists frequently have strong ties to their land even though living in faraway countries. In the works of Ragna RÃ³bertsdÃ³ttir, especially in her choice of material, surface both rapture and rapport with this unique country on the periphery of Northern Europe. The lava she uses in her works characterises the country, being the stuff of which it is made.
Ragna RÃ³bertsdÃ³ttir collects rough rocks from the lava fields of her land, which she calls a "studio". When the delicate stones, which she selects and sorts carefully, are placed on a wall, they form cosmic fields transporting the authenticity and simplicity of the lonely, Icelandic volcanic landscape into the exhibition hall. The material the small lava pieces and sharp glass shards expresses RagnaÂ´s strong connection to her country of origin, Iceland, and when the light is altered, the minimalistic, monochromic patterns in her works are transformed into magnificent murals; in this sense her work embodies both minimalism and opulence.

Beate Terfloth articulates the wall with horizontal pencil lines. These lines, built up from many small individual strokes and thus solid in themselves are a fragile presence in the surface that visually undermines the solidity of the wall. Her work in this way interferes with the perception of the structural border of the space, opening it to the eye as an interspace, as a borderzone. The subtleness of the event, paired with a factualness of it, to which the viewer is led by following the individual speed of the lines as they traverse the minimal horizontal composition of the wall, creates a definite atmosphere, a phenomenon that Terfloth has also been interested in, when studying Islamic Architecture in Pakistan.
Her work, minimal in appearance, reacts to the space intuitively, introducing to it something like a thought or a memory of a bigger dimension.
The pencil is originally an instrument of recording, here it is recording an event as it is happening in front of us.

Clearness and formality characterise the works of Sabine Funke, at the same time as they reject objectivity and narrative. By painting directly on the wall, she merges art and architecture, thus creating an art form that at once entrusts itself to the space and educes it so that the picture surface reaches its apex as a chromatic surface. Her wall paintings reveal the aesthetic in its original meaning as a sense experience. The colour fields, which are geometrically demarcated and allowed to pile up and intersect so that the eye senses depth in them, releases energy that delights viewers by allowing them to sense colour as a wave. The stimulating effect of the colour, which is applied in many limpid layers, thus makes a surprising connection with the subjective nature of the abstract. Precisely by rejecting all objectivity and using only pure colour and form, the artist succeeds in releasing energy underlying all objectivity and directs it toward the viewer.

All the works have a strong, individual appearance and cultural identity, at once clearly separating them and enabling them to call to one another. In the beginning, a strict, monochromatic painting, on the one hand, and decorative narrative of the drawing, on the other, are juxtaposed: clear colour against the simplicity of a selection of stones. The difference in materials and the cultural and conceptual backgrounds of the works sets off a process where each work asserts its independence from the others. This contrast is manifested variously as competition, differentiation or interference, or it allows the works to co-operate, support and educe one another. It will not be until the experiment is over that an answer will emerge to the question of which viewpoint will prevail. And the works will also have to make it through the tussle in the exhibition hall. In the final analysis, the viewer stepping into the hall is drawn into this yin-and-yang nexus of struggle and expression.

When the exhibition is over in Munich, it will be repeated in Reykjavik, and it will be exciting to see how this leads to another conclusion. Applying colour or material directly to a wall causes the distance between picture and wall to vanish and erases the boundary usually drawn by the frame around the surface. The picture thus nearly becomes part of the architecture and merges with the space. The picture on the wall combines with the space that the works occupy, yield to or break up with mutual rejection at the same time as they transmit visual messages. The different conditions in the two galleries therefore demand different treatment of the space. Similarly, the influence of culture and landscape in the host country, Iceland, will blend with the works in their latter stage of creation when they are set up in Reykjavik.

The artists and their ideas will be the same, but the exhibition's appearance will be new.

On Thursday, July 4th, at 5 p.m. the exhibition Three Walls will open at i8 galleri.

On Saturday, July 4th, at 5 p.m., Frosti Fridriksson will open his installation The Branch in the niche under the stairs at i8.

I have been travelling in India for the past 3 months and plan on staying there a bit longer.

Many beggars have crossed my path but I soon realized that there was no way that I would be able to help them all. That is why I decided to open a small branch for Indian beggars here at Klapparstigur and get art lovers to join forces to help the beggars. The sum that will be raised here will then be handed out to those who need it.