Crossing nations and generations, the exhibition presents the works of over 50 artists, the most emblematic of the former Eastern Europe countries, and underlines their influence on the international art scene today. Twenty years after the fall of the Berlin wall, the show challenges the idea of art history as something linear and continuous. Over 160 works of art, across all disciplines, whilst sources, archives, documents as well as videos and films are presented inside the installation created by Slovene artist Tobias Putrih. There will also be documents retracing the history of artistic exchanges between Paris and Eastern Europe as well as films by artists and documentaries on their performances. 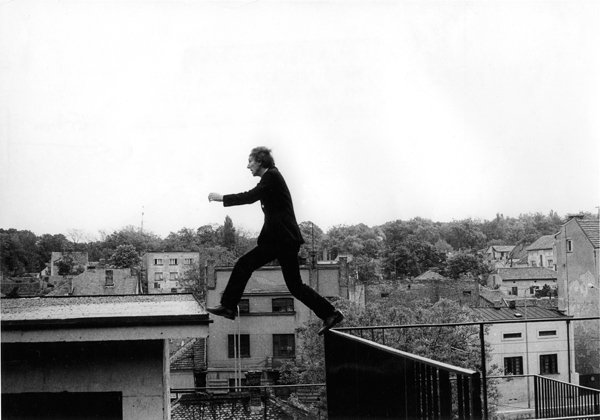 Curators: Christine Macel, Curator, Head of the Service for the contemporary creation and prospective, Joanna Mytkowska, Director of the Museum of mordern art of Warsaw, associated curator for the Espace 315, sources, documents, films, etc. Nataša Petrešin-Bachelez

From April to July 2010, Centre Pompidou presents "The Promises of the Past," a transnational, transgenerational exhibition featuring works by more than fifty artists, many of them from Central and Eastern Europe.

The exhibition title picks up the expression used by German philosopher Walter Benjamin (1892–1840) in his analysis of history as a succession of discontinuous events. The countries of Eastern Europe are conspicuous examples of this phenomenon.

This exhibition examines the former opposition between Eastern and Western Europe by taking a fresh look at the history of the communist bloc countries twenty years after the fall of the Berlin Wall. The aim is twofold: firstly, to show the work of artists who are not well known in France but whose work has left a mark on their native countries; secondly, to elucidate the manifest influence of tutelary figures from Central and Eastern Europe on the young generation of international artists.

Indeed, many contemporary artists, from former Communist countries and beyond, have picked up practices that characterized artistic currents in Central and Eastern Europe and have been significantly inspired by the movements and themes developed there. Witness, for instance, the discreet performances by Roman Ondák which are very close to the performances by Július Koller and Jiří Kovanda in the 1970s. Many artists on the contemporary art scene have reinterpreted the architectural heritage of the communist period: this is the case for likes of David Maljković who breathes new life into Vojin Bakić's buildings and of Cyprien Gaillard who documents the current state of these architectural vestiges.
The exhibition highlights the work of some of the most emblematic artists of the former Eastern bloc, underlining their influence on the international scene. Alongside such well-known artists as Sanja Iveković, Dimitrije Bašičević Mangelos and Edward Krasinski, the French public will be discovering a number of artists for the very first time.

One hundred sixty artworks in all mediums are on view in the Galerie Sud of Centre Pompidou in an original exhibition layout by Monika Sosnowska (Poland). In Espace 315, documents from the archives of the former Communist bloc are presented in an exceptional installation by Tobias Putrih (Slovenia).
There will also be documents retracing the history of artistic exchanges between Paris and Eastern Europe as well as films by artists and documentaries on their performances.

The exhibition is structured around six main themes: "Beyond modernist utopias"; "Fantasies of totality"; "Anti- art"; "Micro-political gesture – poetic gesture"; "Feminine – feminist"; "Public space – private space". At the same time, the show strives to challenge the very notion of art history as a linear, continuous series of events, as t was conceived throughout the modern period, shifts the focus in the process to the notion of discontinuity. The catalogue Les Promesses du passé / Promises of the past, edited by Christine Macel, Joanna Mytkowska and Nataša Petrešin-Bachelez, is published by Éditions du Centre Pompidou.

Catalogue of the exhibition:
Edited by: Christine Macel, Nataša Petrešin-Bachelez format: 22 x 28 cm 256 pages 200 colour illustrations 44,90 euro
Twenty years after the fall of the Berlin Wall, when the idea of a nation state involving a geographic Bilingual (French-English) approach of art is out-of-date, "The promises of the Past" questions the former opposition between Eastern and Western Europe by reinterpreting the History of the communist block countries. The catalogue starts with thorough essays provided by art historians which offer a new sight on art from this period and the consequences it had on nowadays’ younger generation of artists. The 40 historical and contemporary artists are presented with bibliographical details, texts about their work and a wealth of photographs. The catalogue will also present the Espace 315, where sources, archives and documents are collected in order to put in their historical and artistic context the displayed artworks. The catalogue finally contains a demanding anthology of texts written by contemporary historians.
The catalogue has been designed to reflect these various processes and includes groundbreaking essays by authors such as Jan Verwoert, Elena Filipovic, the late Igor Zabel, Dieter Roelstrate or Luiza Nader, previously unpublished in French.

At the opening on 13 April 2010, two artists Jiří Kovanda and Roman Ondák will be presenting performances in connection with the space and themes of the exhibition.