New works by Amy Sillman titled Transformer (or, how many lightbulbs does it take to change a painting?), including large and mid-scale paintings, two different suites of drawings, and a new edition of her one-dollar zine The O-G. In the gallerys Backspace the exhibition Holes by Anna Sew Hoy, a group of nine sculptures, which continue her exploration of hand-built clay and assemblage. 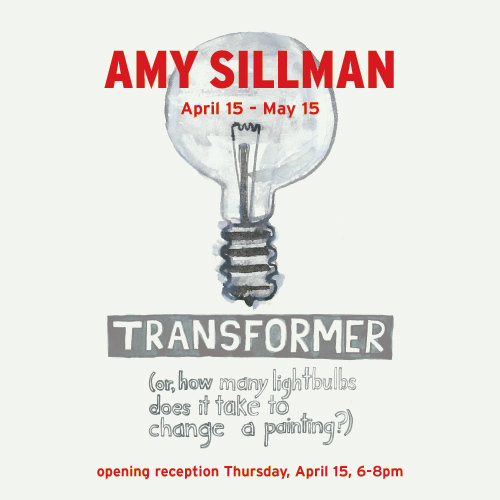 Sikkema Jenkins & Co is pleased to present an exhibition of new works by Amy Sillman titled Transformer (or, how many lightbulbs does it take to change a painting?) on view from April 15 through May 15, 2010.

Sillmans show features a range of new work across mediums, including large and mid-scale paintings, two different suites of drawings, and a new edition of her one-dollar zine The O-G. The show begins with a simple drawing of a lightbulb. The lightbulb transforms into a flashlight, which in turn becomes a medium for self-reflexive investigation. The lightbulb is thus a pivotal image for illumination, reflection, transformation, the comic, and obsolescence a thematic stand-in for the conditions of painting itself.

In all of her new work, Sillman continues to undertake a full-scale painterly negotiation between forms of corporeality and processes of thought. Sillman is known for a rigorous, process-based language that is realized through additive/subtractive drawing procedures and a vivid color sense. She continues to work formally within the frame while simultaneously perforating painting with issues belonging to discourses adjacent to painting, such as philosophy, feminism, performativity, and humor; the latter are incorporated in part through a small-scale D.I.Y. 'zine, The O-G, made especially for the show. For the past year, Sillman has included a new edition of this zine with every new group of paintings she makes; it is a form that allows her paintings to speak, while comically subverting the solemnity that (intentionally or unintentionally) can enshroud shows of abstract or semi-abstract painting.

Having worked for several years with the dual procedures of abstraction and portraiture, Sillman is now finding the figure again within an abstract process. In these paintings, figures return not as representations per se, but as body fragments and suggestive gestures that are located in an anxious, anti-heroic formalism where figuration, color and form intersect in logical and yet absurd complexes.

Amy Sillman has exhibited extensively throughout the US and Europe. Her work is in numerous public collections including the Museum of Modern Art, New York, the Whitney Museum of American Art, the Art Institute of Chicago and the Museum of Fine Arts, Boston.

Concurrent with Amy Sillmans show, Anna Sew Hoy will present the exhibition Holes in the gallerys Backspace. The exhibition consists of a group of nine sculptures, which continue her exploration of hand-built clay and assemblage. These works were made to create and frame space; space to look through and space to hold something else. They are sculptures to see and see through. Sew Hoy works with cast-off sunglasses and denim jeans, old cell-phone cords and gold chains; alongside classic sculpture materials such as clay, steel and rubber. The resulting works suggest an adorned body, as they also remain willfully abstract. The sculptures contain a conversation with surface, interiority, exterior, faade, function, and imaginary places, like mirrored landfills. Product display is a question here, and the continuing obsolescence of cultural artifacts, as things go out of fashion and use. The ancient symbol of an ankh bumps up against wraparound sunglasses to suggest a continuity of the man-made. As well, the works contain holes and voids, windows and breathing room, while they frame events such as a gold chain becoming a limp line, and the seams of jeans becoming a web that catches other detritus.

Anna Sew Hoys work has been included in numerous museum exhibitions such as the California Biennial 2008, at the Orange County Museum; Now You See It, at the Aspen Art Museum; Edens Edge, at the Hammer Museum, Los Angeles; and One Way or Another, at the Asia Society in New York. She has had solo exhibitions at LA X Art and Karyn Lovegrove Gallery in Los Angeles; and Renwick Gallery and Massimo Audiello Fine Art in New York. She was awarded a United States Artists Broad Fellowship in 2006, and was most recently awarded a Durfee Foundation Grant to support her collaborative work with Eve Fowler, for their project called Two Serious Ladies.