The exhibition includes new works and projects by around 18 international artists and artist groups, bringing together challenging works in a multitude of strategies. All in an effort to address the question of how art and art education might resist instrumentalisation by the art market and by the streamlining efforts of the state. Parallel: On Use Value of Art presents 5 positions of an artistic practice that comes to the breaking point with what is generally seen as art in its neoliberal contemporaneity. 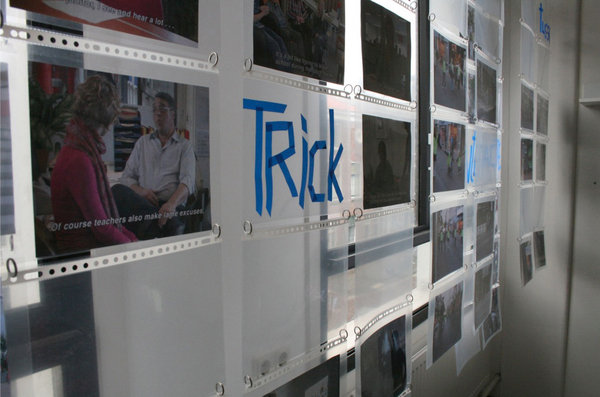 Concept elaborated jointly with Will Bradley

'Manufacturing Today' has been conceived as a five year research project and exhibition based in Norway but created, this time, in collaboration between art academies in Norway, Finland, Lithuania and the UK. This research will be publicly manifested in formal workshop sessions, a symposium, a publication, an exhibition and a series of commissions, all in an effort to address the question of how art and art education might resist instrumentalisation by the art market on one hand and the streamlining efforts of the state on the other. To resist this instrumentalisation means to support the idea of a potential within the institution of art for the imagination of an alternative social order. To focus on education is to engage with real political questions about how institutions shape society.

The title 'Manufacturing Today' is appropriated from a US and European industry journal. In choosing this title, we wanted both to point to the coming industrialisation of European art education, and to the role of culture in making the social superstructure, in manufacturing society.

In shaping our concept one of our main worries was that it could run the risk of simply contributing to the current tendency to see art schools as places that produce students as a product for the market. But is there an alternative to this situation? Is there a social role for art students, for young artists, other than to succeed or fail as producers/products in the culture industry?

These problems do not have simple solutions, these questions do not have easy answers. But we felt that to engage with them would ultimately be more valuable than to simply accept that artists are powerless to understand or change the prevailing situation.

Our proposal also aims to turn what might be seen as the drawbacks of the Trondheim situation which is– a peripheral position, with its lack of access to the international art market, lack of local audience expectations – and change this into strengths – an interest in network building, a possibility to develop work and ideas without market pressures, and the possibility to think critically about art's social role.

What we therefore propose is to leave aside the idea of the biennial as a general celebration of contemporary art and put in its place a specific project of research and production focused on well-defined issues. A project that seeks to create a space in which to address particular problematic questions in depth, to build real alliances and make connections around what are essentially political issues.

We have decided not to compete with the biennials of the art world periphery, not to produce a minor spectacle. Instead we have the chance to let the project develop from the parameters and area of interest that we have chosen, to follow existing links and networks outside of the mainstream and to offer space for oppositional ideas.

Our intention is not only to map out this situation, but to create a forum in which these ideas can be focused towards practice, a productive space.

The idea of self-organisation in the art world has, in the last decade, expanded beyond the 1990s resurgence of artist-run spaces and the tension between collective production and entrepreneurialism that they embodied. In parallel with the directions taken by major global activist movements, the art world has seen the revival of broadly anarchist ideas of autonomous institutions, a critique of capitalist or state-institutional modes of knowledge production and distribution, and the return of the ideals of the free universities of the 1960s. In the artworld of Scandinavia and Northern Europe, projects such as Copenhagen Free University, Malmö Womens Free University, Barselgrad, Institut for Farge, Protest Lab, UKS (Young Artists Society), UKK (Young Artists and Artworkers) etc, have embodied this direction.

There has been a great deal of recent interest and critical attention given to the idea of radical education. Aside from the many self-organised initiatives and self-institutions, the institutional mainstream has taken up the theme in many high-profile ways.

We are happy to be in a position to build on the good work that has already been done in this area. But we plan to work from another angle. Rather than place these issues in the artworld spotlight, we aim to support existing practice, to enable contact and build networks, and to provide a space for experiment and public encounter rather than for either hermetic discussion or its spectacle.

The project began with a workshop in Vilnius in January, to which were invited an international group of artists, students, theorists, teachers and activists. Presentations by the participants of the workshop will soon be published on this website. At this stage, most of the participants of the exhibition have already been invited and are working on their projects. 'Manufacturing Today' will bring together many artist-teachers who are elaborating with a group of students specific projects for the occasion, individual artists, post-graduate artists as well as artists who function very much like activists and who have created their own self-organised structures.

We cannot pretend that this is a self-organised project, an expression 'from below'. It clearly is not that. It is, instead, an attempt to focus the resources of a biennial towards research and production around a directly political question, and to create a process by which participants have a genuine voice in the shape of the whole. We hope that the idea of a responsibility to a public, which is after all the underlying idea of any major art project, is included in the reflexive nature of the process - in other words, we hope that, by giving a platform to artists and groups who hope to change society, we will produce an exhibition that will be of interest to that society.

The exhibition under the title "On Use Value of Art" presents five positions of an artistic practice that comes to the breaking point with what is generally seen as art in its neoliberal contemporaneity. Exhibited works emerged as a result of collaborations that Ivan Basso, André Raatzsch, Sibylle Hofter, Rädle&Jeremic and Stephan Kurr have done together with other artists, young people and children from Serbia, France and Germany. The authors have developed specific artistic approaches to articulate and examine problems and experiences in the lived world of the participants, expending everyday life into the experimental space of art.
Ivan Basso worked with unaccompanied minors living on the streets of Paris and made photos and a video that questions the ethics of child protection, André Raatzsch and Emese Benkö developed a sound sculpture with youth in Berlin, a fictional Roma female superhero. Artist from Berlin, Sibylle Hofter has worked in Serbia, Leskovac to realize staged photo-portraits. Rena Rädle, and Vladan Jeremic with Saša Barbul, Sali Kadrijaj and Muha Blackstazy, have made a movie about the destiny of the dislocated inhabitants of the Roma settlement near the Gazela bridge in Belgrade. Stephan Kurr shows a two channel video installation about role models for men and it's contradictions. The question about the use-value of art researches the relation between the producers and the recipients of art, roles that in the case of the presented works are not clearly defined. Visitors of the exhibition will bring in one more position into a field that touches on one edge the arts, on the other evolves into politics - permanently stressing the issue in which way artistic and didactic practice can be combined in the context of criticism of contemporary society.

Private view 16 April, 6pm
Curatorial talk and discussion: 16th of April 2010 at 4pm
The symposium: Instead of a conventional panel structure the symposium at the opening of "Manufacturing today" will take the form of a dictionary. This means that every guest and contributor is invited to create one concept that is then going to be presented at the opening weekend in a half hour time slot and in alphabetical order. The symposium will bring together recognized theorists, artists, educators and activists from around northern Europe. 'Dictionary of War' is an ongoing project by Florian Schneider.